Yesterday was the umpteen hundreth annual Garter Ceremony – held in St George’s Chapel within Windsor Castle, and a modest sized group of commoners were allowed into the Castle to watch various Royals and members of the establishment don their fancy robes and walk to Church.

The Most Noble Order of the Garter is the highest order of chivalry existing in England, founded in 1348, and is one of the few honours that is entirely within the gift of the Monarch without consulting the Prime Minister.

As it happens, it used to be a political appointment, but was handed back to the Monarch in 1946 after being somewhat debased by our elected officials – although tradition is that most former Prime Ministers do get made a Knight when a vacancy arises. Tony Blair is still waiting though – as is Gordon Brown.

Although an ancient order, the ceremony that took place yesterday is – like much Royal pageantry we see today – quite a modern display. The annual service tended to fade in regularity from 1674, and almost vanished from 1805 onwards – until its restoration in 1948 to celebrate its 600th anniversary.

Since then, it has again been an annual parade, albeit it one that happens “in private” within the Castle.

I used to live in Windsor, and visited the Castle on quite a few occasions, either providing first aid cover as a member of the St Johns’ Ambulance during ceremonies, or delivering goods to customers who lived there. I have never visited the place as a tourist though – and yesterday I again spent hours in the Castle grounds, but not doing any of the “tourist things”.

Waving our large green invites, and passing through security, myself and a friend were directed to our allocated spot – a patch of pavement next to one of the buildings. 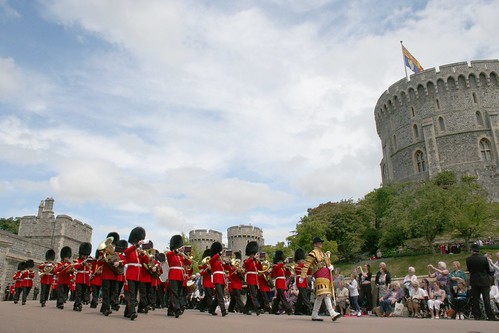 This was not the sort of public event thousands of people and big metal railings to stop the great unwashed getting too close to the nobles, it was very much a bring a picnic sort of event with people bringing fold away chairs and settling down for the afternoon.

Pavements being very narrow, you are also not going to be stuck behind a huge crowd, so we decided to sit on the pavement, with feet dangling in the gutter. Although the pomp and ceremony is the same, there is a noticeably more relaxed atmosphere in Windsor compared to London for regal duties. 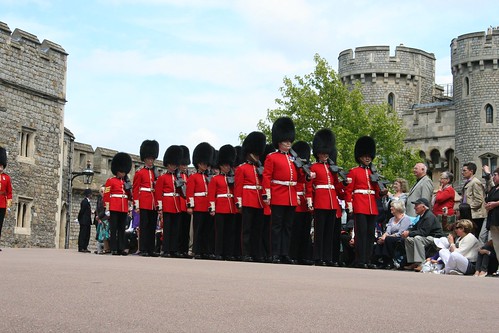 Out come the marching bands to entertain the crowds while we wait, and then the soldiers to line the route – the great unwashed not being trusted quite THAT much.

While we were waiting a few cars drove past carrying various persons – and judging by the huge roar heard round the corner by St George’s Chapel, it was presumed that Catherine Middleton had arrived.

And then about half an hour later – the procession itself.

Lead by the Constable and Governor of the Castle, Air Marshall Ian Macfadyen and accompanied by the The Military Knights of Windsor – who live in the Castle and attend Mattins each week on behalf of the Knights of the Garter. 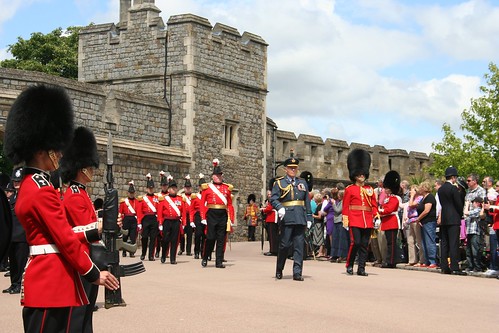 Then the Officers of Arms in rather more fancy costumes. 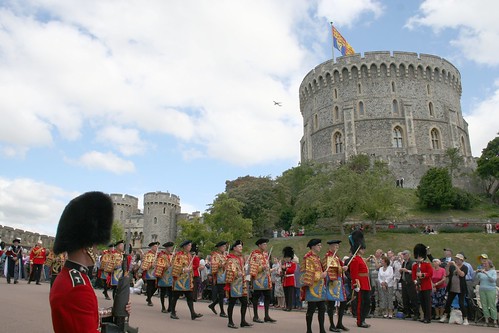 Black Rod from the House of Lords was also there – and according to the booklet, can demote a Knight by taping him on the shoulder with his stick. Makes a change from banging on the door of the House of Commons.

Then finally, the Knights of the Garter wander past. John Major was giving fairly sly waves to the crowd while the rest just walked past. The process in order of priority, with the newest going first and the oldest last – then the Royals follow behind. 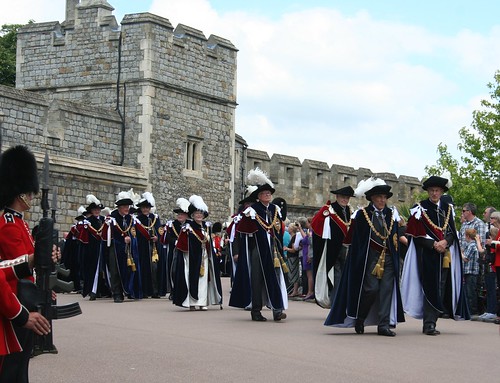 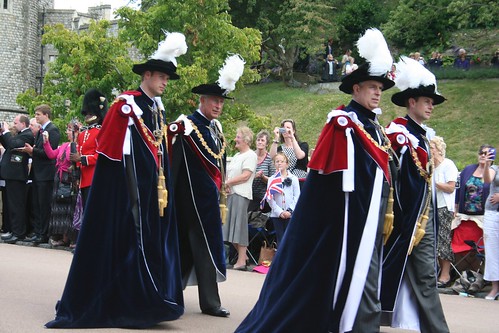 Finally The Queen comes walking past with a couple of page boys carrying the train, and Yeoman of the Tower on day release from London as an escort. 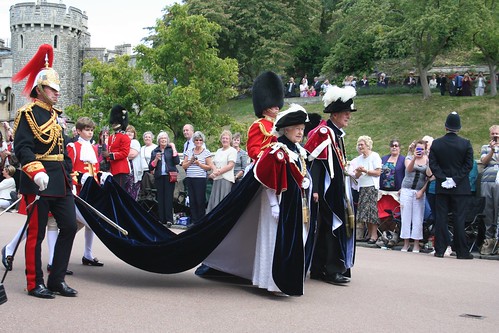 Having gone past and into the Chapel for their service, there was a flurry of activity as the Ceremonial Mad Dash for the Toilet was carried out by the onlookers, and the military shuffled around a bit.

You could just about hear bits of the service – which was allegedly on loudspeakers, and when the National Anthem was played we all stood. And then the carriages came past. Do I take out the camera, or observe the Anthem. 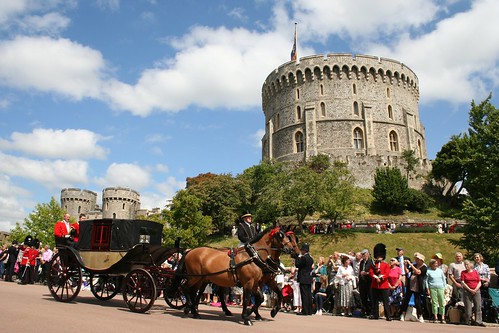 More hanging around – an usher said people could leave if they wanted, and it seemed as if a notable percentage did decide to leave then. A father took photos of his son next to a soldier at attention, and the son sulked throughout. One for use when son is a teenager and in need of embarrassing.

Oh, then all the military start tidying themselves up again and with the sound of horses, the carriages rode back past, this time with tops down and royals inside.

To the sound of applause.

Is it just me, or is applauding a recent thing, as I cannot personally recall it ever being done until about a decade ago. Before that it was cheers and flags – not clapping. 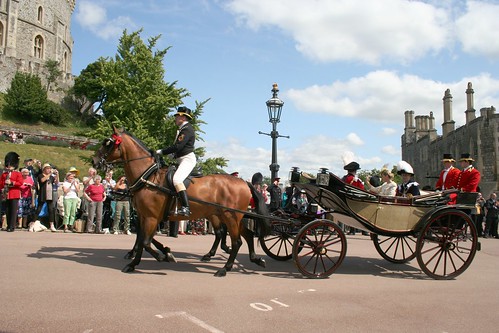 Royals in carriages past, it was time for knights and guards in more modest cars to go past – this time they waved to the crowd, who had stopped applauding. Knights not as worthy of hand clapping as Royals it seems.

A bit more waiting around for the military to get out of the way, and that was that – all over for another year.

It’s an odd ceremony as it contains a lot more pomp than many others, especially the robes worn by the Knights, and the Queen walking in a heavy formal uniform is a fairly unusual sight now.

It was also unusually intimate, as mentioned above, no metal barriers to stop people wandering around the place at will it seemed and it all happened in the privacy of the Castle walls, so not the usual vast crowds that would require arriving at 6am to get a decent view. 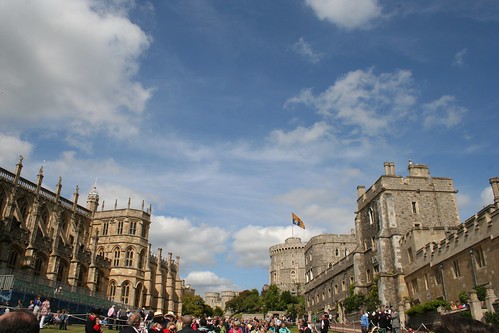 Tickets to be in the crowd are allocated by ballot each year (details here) and I was again not expecting to go this year as I didn’t get any tickets, until a reader of the website asked if I wanted his tickets due to other commitments. Which was nice, and appreciated.

More photos in my photo gallery.

I do aim to head back later this year – maybe – as they are opening the Round Tower to tourists for the first time in decades, so it seems an ideal time to finally visit the place as a normal tourist.