Every night, long after the tourists have been kicked out an ancient ceremony is performed in private inside the Tower of London – the Ceremony of the Keys.

What keys? The keys that lock the Tower every night.

For roughly 700 years, as no one is entirely sure when it started, the Tower has been formally locked up in a ceremonial event which has gained a few extra tweaks over the centuries.

The legend is that a former monarch wandered over one evening, and aghast that he was able to enter the Tower at night ordered a formal locking-up process to be enacted. As monarchs don’t casually wander anywhere without a lot of forewarning, this seems an unlikely, if charming tale.

Whatever the origin, it used to be carried out at sunset, at the time when the old market that was allowed within the walls was also send packing. This tended to be unpopular, so the key holder eventually gained an armed escort, and although there’s no longer a market to disturb them, the armed escort is still provided.

But who in the empty Tower is going to disturb them?

We are — for a small group of ordinary folk are allowed inside each evening to watch the Ceremony. It’s a very formal affair, so no photography allowed, and all are required to say Amen when God is exhorted to do his saving of the Queen again.

After a waiting list of about a year, this was actually a return visit, as I was in the Tower about a decade ago for a private event which happened to include the Ceremony. On a cool Sunday evening though, a small group gathered by the iron gates that secure the Tower courtyard and just before 9:30pm, a Beefeater arrives to unlock and permit us within.

Suddenly, although we’re standing where thousands of tourists stand daily, we’re doing it at night, in private, where people don’t normally get to stand.

Like all Beefeaters, an ex-army chap, with a bellowing personality to match, and a brisk talk to explain what happens. All this inside the dimly lit tower, next to Traitors Gate, just in case anyone felt uppity, and with dramatic clouds rushing overhead. 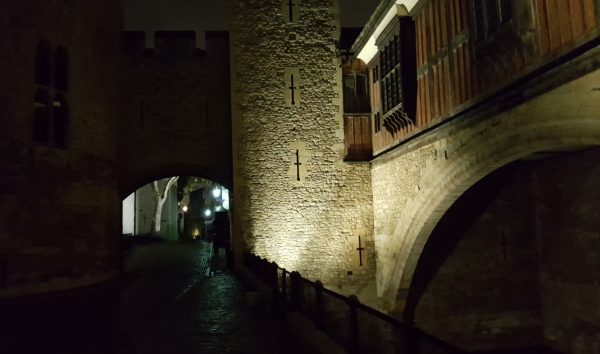 A film director would be accused of being excessive in how they showed the Tower, but last night it was reality itself delivering more than Hollywood would dare to get away with.

Then marching down to meet us four fully armed soldiers in red and bearskins ready to do their duty.

Another Beefeater come up from the main gate, with THE KEYS jangling in the quiet night, with a solitary candle in a lantern spookily lighting up the stone walls as he passed.

Then to walk back, with armed escort to lock the gates themselves. From where the public are allowed to stand, it’s a bit difficult to see this bit in the far dark recesses of the stone gates, but the swinging lantern and the approaching footsteps marked their return. The Tower is locked shut for the night.

Then suddenly – another soldier who had been on patrol appears and lowered his gun, shouting, in a strong Glaswegian accent

“Halt! Who comes there?”

With that the armed escort turns up the hill to the White Tower where another set of soldiers are waiting, and here, with a motion to be quiet we are allowed to follow.

Photo by The Household Division

The keys are presented, and taken to the Constable for safe-keeping, and then the Last Post is sounded. This takes place in the darkness of a shadow from the walls of the old guardroom, where bombs were dropped in WW2 killing a number of soldiers within, and delaying the Ceremony by a few minutes as the bodies were removed.

A letter from the King said not to worry about the late locking up of the Tower – but don’t let it happen again. 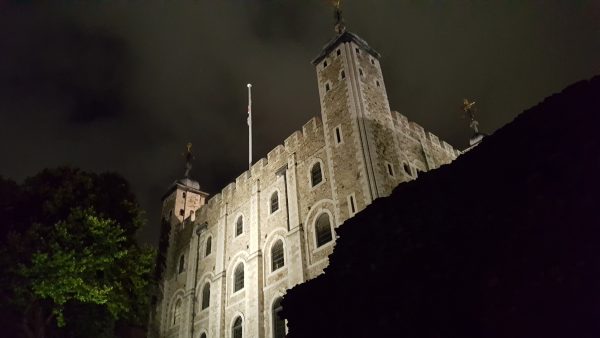 Slowly the sounds of the Last Post drift away in the quiet Tower and the soldiers march off to their barracks to remove the red tunics and switch into normal gear, for they will be on duty overnight.

Legend has it that the occasional drunk tries to break in at night for a laugh, only to be confronted by a very angry army patrol pointing guns and bayonets at him.

For ourselves, we’re locked into the Tower! 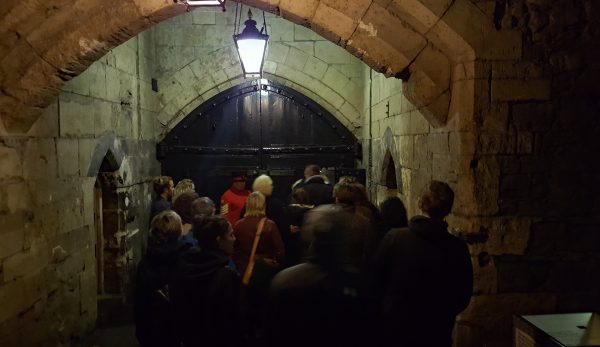 Actually, there’s a small entrance cut into the main door, just about small enough to get through and get back out – for the Tower has a grim reputation for those “invited” to spend the night there.

For a short while, a small group of people are able to observe, and participate in a truly ancient ceremony that happens in private every single night. To spend an evening in the darkness of the Tower feeling very medieval, and then stepping through a wooden portal back into the modern world. 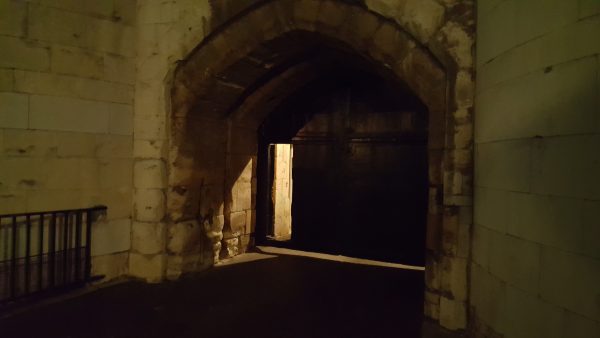 If you want to attend yourself, then tickets are free (with a small admin fee), but the waiting list ponderous, as the evenings are now fully booked until next October.

NEWSLETTER
Tagged with: ceremony of the keys, tower of london