Artists and scientists are Jiggling Atoms

Over at CERN, scientists collide atomic nuclei together to split them into fundamental particles and study them.

Here in London, a number of scientists from the bizarre world of quantum physics recently collided with the equally bizarre world of modern art, and the results of that collision are now on display in an art gallery.

For one week only strange interpretations of the world of the very small have been placed on achingly fashionable whitewashed walls just off Brick Lane and are as baffling as the fundamental particles that inspired them.

I happen to think that art inspired by science can be wonderful, especially the more abstract, and magazines such as New Scientist have long supported abstract art to illustrate articles which might otherwise struggle to have graphical illustrations with them.

Sadly, there is little interpretation going on in this art gallery.

There was also a lack of descriptions about the art – with empty wooden holders still waiting for their blocks of thesaurus generated text to explain the thinking behind the art. However, as most of it was self-descriptive, the lack of signs is not a problem. 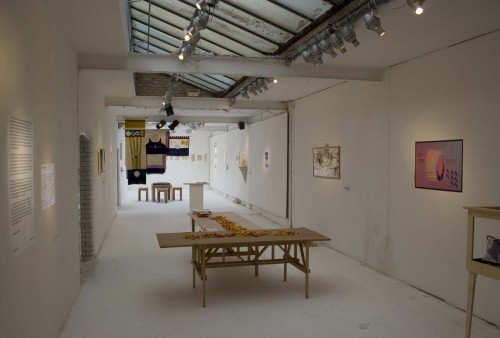 One work is basically just a photocopy of the famous wave/photon interference patterns that demonstrate the weird world of the quantum. Maybe it was a carefully constructed work of art. Whatever it was, it certainly didn’t look like anything more than a copy of an experiment.

A series of wooden blocks with holes probably represent the varying sizes of atomic particles, and a childlike painting of the passage of time had me wondering if I was missing some fundamental message within the representations.

Probably the most interesting, and the only one with an explanation card was a pencil drawing of a mesh, into which was formed the image of a human wearing astrological symbols. The mesh representing the Higgs field which gives matter its mass, while the human from the field representing our understanding of it. Very Kit Williams in fact, in concept if not execution.

The celestial spheres, with possibly religious figures burning the middle was both technically clever and reminiscing about some medieval views of the sky, but again it failed to really get to the core of the subject – of the atomic and quantum worlds.

Overall, this was a display that could have been about anything really and there didn’t seem to be any appreciation in the artist for the sheer wonder that is the universe when you get down to the atomic level.

An introduction sign noted that 99% of an atom is empty space. Actually, closer to 99.99%, but anyway – the point is that between the nucleus and its electron cloud is nothing – it is a pure empty void. Between the atoms is more void, as each atom is held in a molecule, and even between molecules is pure emptiness.

(Emptiness as we understand it today)

If you crushed all the emptiness between and within the atoms out of a human body, we would be about the size of a grain of rice. That is how little physical matter makes up the average person.

When you look at another person, there is almost nothing there – and the atoms are held apart from each other by the raw forces of nature. That goes for everything around you – the buildings, the plants, even the planet we stand is a barely existing foam spinning in space.

We are all beings of energy.

I find that an exceptionally beautiful notion, and it was a pity that the artists seem to have missed a chance to take inspiration from the underlying mysteries of the atomic world.

The exhibition, Jiggling Atoms is on display until this Sunday at The Rag Factory. Entry is free.