A report was released earlier today to widespread commentary about the state of the UK’s cities, and the effect that London has on the UK economy.

Like all such reports, it says exactly what you think, and disagrees with everything that the opposition says — and visa-versa.

There was however a table there, which was highlighted on Twitter and looked very interesting as it seems to suggest a correlation exists, which has been supported by anecdotal comments I have been told by some railway firms.

What was striking was the list of cities in the UK ranked by the percentage of their population employed by a company that was also headquartered in London.

So, these can be considered to be the regional outposts of the London HQ. 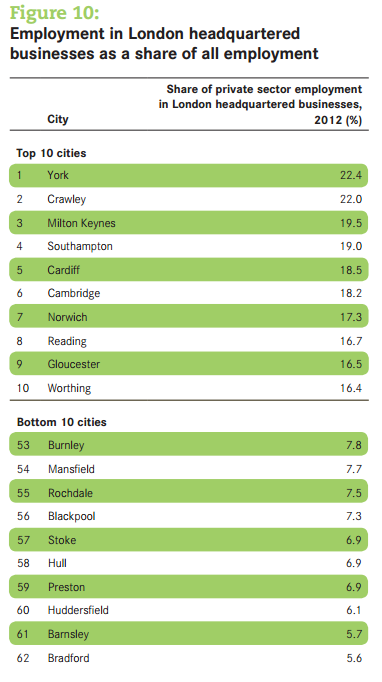 What seemed to be showing up was that those locations with a high level of local  employment by a London based firm also had good transport links to London.

It is easy and reliable for staff at the London head-office and at the regional outposts to meet up. Cheap, probably not! But fast and reliable yes.

When you look at the less well performing cities, even those which are geographically not much worse in terms of physical location seem to do poorly because of the lack of decent rail links.

As was also noted in the twitter debate, the rail links might exist, but they might be indifferently operated with too few trains per hour to make it an attractive option to businesses who often prize reliability more highly than simply shaving a few pennies off the travel budget.

Now, this seems to fit in with some conversations I have had over the past few years during my site visits to see the redevelopment of the King’s Cross station, and the surrounding area.

The cleaning up of the railway station, and the improvements to the railway service were absolutely critical to the regeneration of the space behind. Although there’s no explicit evidence that companies such as Google chose King’s Cross over another location because of the railway, everyone at Network Rail and the rail operators I spoke to suggested that it was a very big factor in the discussions.

So substantial improvements in railways in London encourages companies to locate close to the railways, and gives them the confidence that they can quickly and reliably nip “up north” to regional centers for meetings.

It is the railway improvements in London that seem — anecdotally — to be helping preserve job creation outside London by otherwise London-centric employers.

These railway improvements need to spread to the regions as well. It’s all very well a Google exec having a nice railway station in London, but if the destination station isn’t, well, frankly “a destination building”, then a lot of that effort can be wasted.

We are humans, and subject to human frailties, and if you travel from the bright lights of London and arrive in a shabby tired station in the regions, it will colour your opinion of the area.

As much of the debate is about how the regions can improve their job creation and stop the great sucking sound coming from the big city, then what is needed is to improve the transport links to the big city.

Make it possible to work in the regions by making occasional travel to London a viable alternative to having to live there.

After all, it can be quicker to get from King’s Cross to Milton Keynes than it can to some parts of South London!

Obviously, that is part of the appeal of HS2 — to boost the capacity and reliability of the railway network so that the regions can compete more effectively against London, by, being less of a hassle to get to when travelling from London.

Making it High-Speed as well adds little to the cost, so might as well do that at the same time.

It could be that a great rail renewal in the UK will be itself a far bigger driver of regional employment growth than any host of government initiatives could ever come up with.