A huge construction site near Bank Tube station is preparing the way for a new tube station entrance to be built — oh, and a very large office block, oh, and it sits in a major archaeological location.

Two 1950s era office blocks have been demolished to make way for what will eventually be the Bloomberg Square Project, and as is not unusual for a large construction site – the Museum of London’s archaeologists couldn’t wait to get down into the mud recently cleared by the builders. 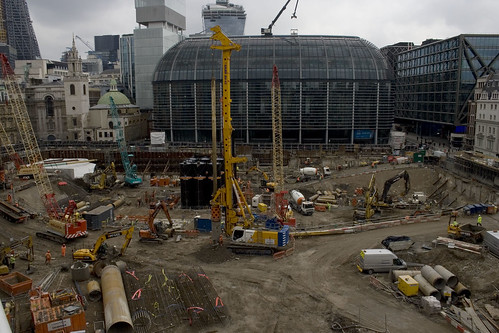 Sadly, the builders of the 1950s were not as enlightened as today’s lot – and an awful lot of the land was simply bulldozed away. Sitting in a landfill somewhere is potentially the remains of a very large section of Roman London.

For this is no mere random location, but probably one of the first settlements in Londinium being sited next to the Wallbrook — one of London’s now lost rivers — but at the time a tidal and navigable river leading off the Thames.

The archaeologists were not expecting much thanks to the destructive efforts of the past, but remarkably, one corner has survived — and this is what will become in the near future part of the new entrance into Bank tube station. A short tunnel is to be dug from the Waterloo & City line platforms to link up to a box that will contain the necessary escalators to carry people to the surface.

The corner in question, closest to Mansion House was the site of a pub, and while most of the rest of the site was eviscerated, here, the digging was for a single basement level, and not deep enough to impact the archaeology. Well, not too much. Sadly, an array of concrete foundation piles were driven into the ground and through the Roman remains. But that aside, the remains were left untouched. 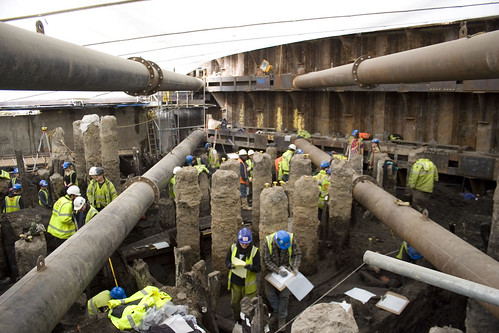 As the Wallbrook river approached the Thames, it also cut a deep V-shaped valley in the land, so the Romans had to build up the sides with wooden foundations. Thanks to the wet soggy conditions, a lot of the wood survived, as did other organic remains, such as leather shoes, of which they have found quite a few.

Sitting next to the Wallbrook was also the famous Temple of Mithras, which caused such a stir when first uncovered, but has had a rather ignominious existence ever since. As part of the new development works, the temple is to be cleaned up and restored, then put back roughly in the same place it came from in a new basement display which will also include some of the remains now being uncovered.

The restored Temple will be about 7 meters below the modern ground level. 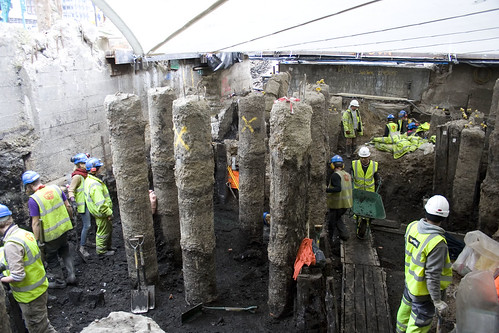 At the moment though, and for the next few weeks, the corner site is a hive of activity as archaeologists dig down around those concrete remains of the old office block to recover as much as they can. They have about 6,000 objects of varying size already and estimate they will get 10,000 by the time everything is finished.

Apart from the obvious pots and metal artefacts, some of the more interesting objects include the wooden slates that would have been covered in wax to use as writing tablets. Although the wax has long since gone, clumsy Romans sometimes scored the wax too heavily and left a very faint scratch in the wood underneath. Using careful techniques, they can recover those scratchings and get an idea of what was written in the wax nearly 2000 years ago.

Slave contracts, legal documents, complaints — all the tedium of daily life that is so rarely preserved in grand records — and all the more valuable because of it.

A clay pot in surprisingly good condition was buried with burnt food offerings and a broach, probably as a goodwill offering when a new house was built. At the other end of the timeline, a well seemed to have come to the end of its use, so was filled in with the skulls of six cows, and three very fine pewter dishes. Half a dish per cow? 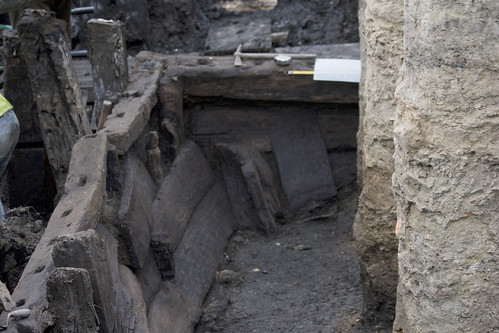 A fairly unique change to this archaeology site is that they are cleaning many of the finds on site rather than carting buckets of mud to a remote location to be cleaned up there. This is good for the 50 or so archaeologists on the ground, who rarely get such instant feedback, but is also assisting the research as they can identify areas of particular concern immediately. 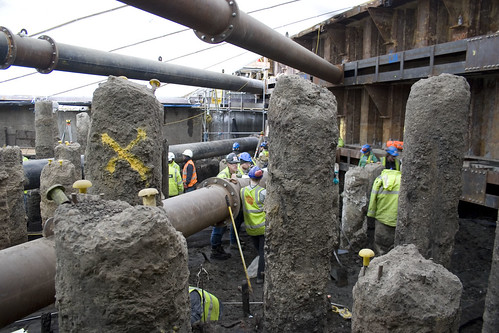 Site access today was thanks to the Museum of London Archaeology who are also managing a blog of their own about the excavations. 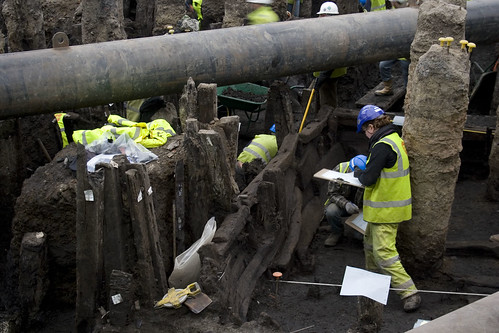 The reinstatement of the Temple of Mithras will also be something to applaud.

As a final thought…

It’s difficult to be sure from the planning documents, as they are usually preliminary in terms of exact details, but the layout of the escalators could be interesting. One set will take people from the tube trains up to a landing level, which looks to be about the same level as the Wallbrook river bed.

Remembering how the river valley was quite steep, the second short set of escalators will run up to the surface much along the same lines as the Wallbrook riverbanks would have sloped.

Think about it when the new tube station entrances open in late 2015 – modern office workers will glide up and down to the riverbed just as Roman settlers would have trudged up and down that same slope nearly 2000 years earlier.