To mark the 200th anniversary of the Battle of Waterloo, the Duke of Wellington’s London home, Apsley House has re-presented Waterloo Gallery where Wellington held annual banquets to commemorate the great victory. The banquets stopped in 1852, but on this 200th anniversary, one more will be held, with the current Duke and representatives of the regiments that fought at the battle. 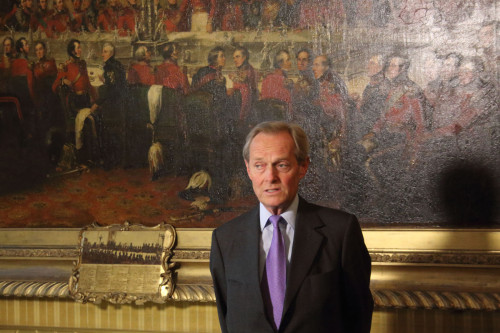 Charles Wellesley, 9th Duke of Wellington standing in front of a painting of the Waterloo Banquet

However, the table is not the same one as it is narrower to allow visitors to walk around — and hence the massive centrepiece wouldn’t have been such a space clutter for the original banquets. In fact, compare the room to the painting that hangs outside it — The Waterloo Banquet 1836 by William Salter — which shows not only a larger table, but a much larger room. Such is artistic license.

If you do visit, also pay careful attention to the mirrors — for they slide into the wall, to reveal the windows behind. A double door design was demanded by the Duke, which acted as a good sound barrier at night as well as reflecting candlelight into the room. 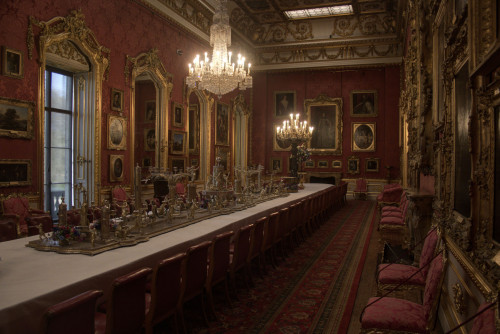 The building, also known as ‘Number 1 London’ has also had a refurbishment, with new carpets replacing the old, in a design closer to the original that had been lain down nearly 200 years ago.

A special series of lecture events take place throughout May.

Starting with Wellington Portrayed – in this insight, the 9th Duke of Wellington explores the iconography of his famous ancestor; followed by Peter Snow – The Battle of Waterloo. Peter will talk about his new book on Waterloo, co-authored by his son Dan Snow, and explain the story of Napoleon’s 100 Days Campaign, from his escape at Elba to his defeat at Waterloo.

The Cutting Edge – Weapons at the Battle of Waterloo gives the audience the chance to get ‘hands-on’ with some period weapons as well as learning about the weapons used at Waterloo.

Wellington Arch, which stands opposite Apsley House has a special exhibition – Waterloo 1815 – The Battle for Peace, running until November 2015, giving an overview of the battle, the reasons for it, the people involved and it’s legacy. Items on display include the Duke of Wellington’s handwritten battle orders on velum, his battle sword and a pair of original ‘Wellington Boots’.