I actually had an entire carriage all to myself, having won an auction by the Transport Museum, but invited friends and people I spar with on another discussion forum to join me. Almost all of them turned up, and some were even on time! 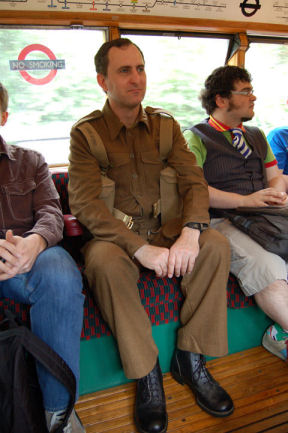 As the Hendon Pageant was also happening this weekend, where the RAF Museum had a series of 1940s events, I hired a suitable outfit for the day and arrived dressed as a WW2 private soldier. This was actually damn uncomfortable, partly as it was very hot and I was wearing clothing more suitable for colder weather – but also I am now sure that wartime rationing shrunk the inch, as trousers ordered an inch larger than necessary (as insurance), felt to be at least an inch too narrow!

In addition to being probably the last time the heritage train could run along the Northern Line, this was a rare chance for passengers to stay on a train as it travelled through the “infamous” Kennington Loop. The trip itself was uneventful, but bizarrely fun for a trip along a tube line and as we passed through stations, people on the platforms looked in bemusement as this odd little train trundled past their lowered jaws. The look on their faces proved to be what some of the group said was the highlight of the trip.

As we left Kennington though, the excitement got a bit more heightened and it was just possible to see in the tunnels the point where we left the main track and entered the Kennington Loop, which is a very sharp loop around to reverse the train back onto the northbound line. Looking at the other carriages made it easy to see just how sharp the curve is.

We were nearly deafened by the screech of the wheel on track as we went around the loop – or at least we think that is what causes the noise, as the loop is reputed to be haunted.

Slowly back up the Northern Line through the West End and the train eventually pulled into Colindale station, which itself had been decorated in Union Flags Jacks and wartime posters. Many of the staff were also dressed up in WW2 uniforms. Waiting outside, an unexpected bonus, as a Lancaster Bomber which was due to have made a flypast over the RAF Museum had been delayed, and we had arrived just in time to watch the magnificent aircraft roar overhead and wheel over Colindale a couple of times before heading off.

I didn’t actually take any photos of the trip, having taken photos last year on previous trips. A friend took the photos of me in uniform.

There is a scanned image of the Kennington Loop here.

Although this was probably the last time the train can run along the Northern Line, here are plans to run the tube train again in September, but up near Amersham, along with the Sarah Siddons locomotive. As usual, as soon as tickets are made available for the heritage train runs, I’ll flag them up on here.

2 Pings/Trackbacks for "Another trip on a 1938 Tube Train"