If you are a large museum in a large city, it is now mandatory to have a blockbuster show lain on for the summer months to lure in the paying customers – and this summer, the Natural History Museum have tapped Gunther von Hagens for a display of his famous (or notorious) plastination technique.

Unlike the previous shows, which featured bald apes in various poses and social settings, this is a more sedate and scientific show, with animals stripped back to varying degrees and only slightly animated in terms of activity. 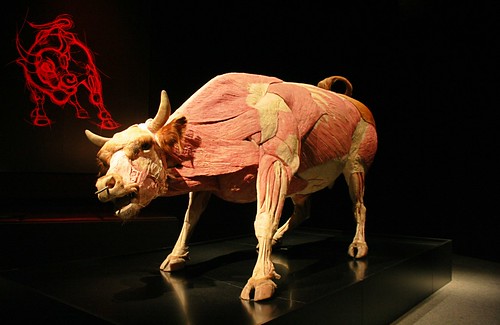 The lack of animation in their poses and the fact that they aren’t humans may make this a less controversial show than his previous efforts, although I suspect some animal rights groups might object. Actually, it might be good publicity for the museum if they do.

Anyone who saw Damien Hirst’s famous pickled (and now, somewhat decaying) shark might find the show a bit familiar, especially as it opens with two sharks. That said, the “red shark”, which is now a display of blood capillaries with all the flesh removed is dramatic visually from a distance, but also rewards close inspection to see the individual veins hanging in the middle of space. 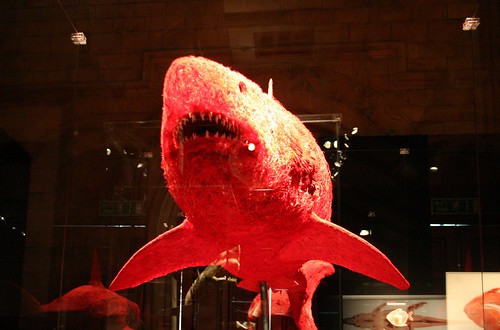 The other fishy exhibits I had to say did not impress that much as frankly, they looked like they could have come from a local fishmongers – and the few that were cut open were not that different from occasional suppers.

Fortunately, the rest of the animals being larger display an internal anatomy that is less familiar – even if you can recognise what part of the plastinated lamb would comprise the Sunday roast.

Helpfully, and most appropriate to the setting, each exhibit has a display card explaining – in brief – the anatomy of the animal or specimen on show. Reassuringly scientific.

My favourites though were undeniably the glass cases with animal organs on display, or small animals in some cases. One case, tucked away in a corner and almost too easy to overlook had some displays of reproductive organs. Gentlemen concerned about their own modest offerings may wish to avoid this if they don’t wish to walk away feeling quite inferior. 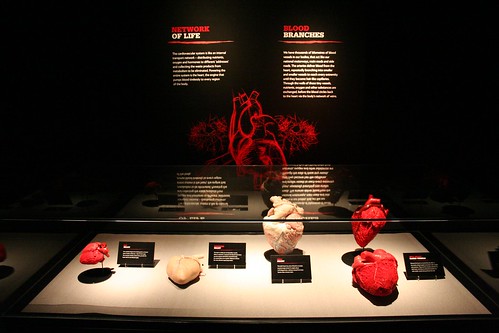 The block busters of the show though are likely to be the stripped back renderings of an adult elephant and running giraffe which soars above the rest of the display. Two ostriches offer two different types of fleshy reduction, and it’s worth walking around the back of the cases to see them from a better perspective. 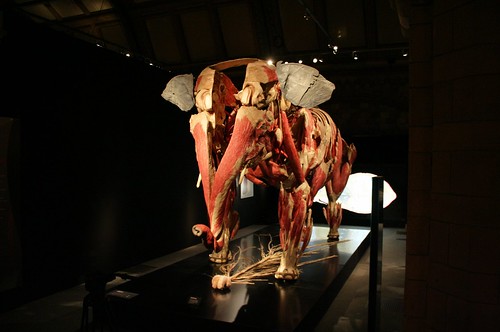 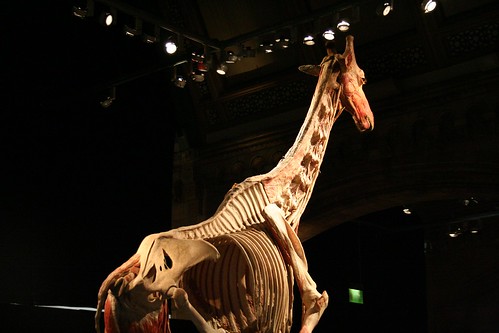 I also rather liked a giraffe that was more art than exhibit, being made up of slices of of the animal that were then hung in space to recreate the rough shape of the original animal.

A small sign at the start of the exhibition reassures that no animal was killed just to be displayed, and that seems borne out by the extensive reuse of Reindeer organs in the display.

Like all museum blockbuster exhibitions you go in past a cashier taking money for your tickets, and leave via the gift shop, where they hope to repeat the wallet digging process. 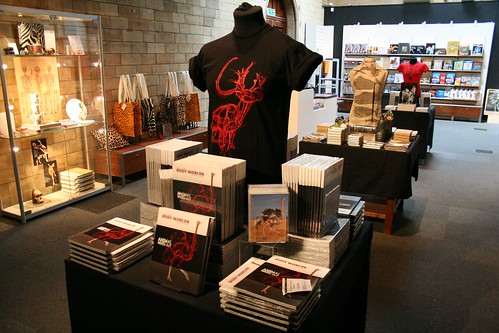 As a display it is a good one – ticks the “ohh look at that” box most admirably while also educating to a sensible degree. For the museum it brings a big brand-name into the museum which always helps.

The exhibition opens this Friday and closes after the Olympic crowds have returned to their respective homes.

Entry is £9 for adults; child and concessions £6; family £27. Free for museum friends.

A few more photos in my gallery.