When visiting an island controlled by the military with very strict instructions to stick to one named road, a tour of the island by tractor is not the sort of thing you should expect.

Yet, that is what was on offer as a very unexpected treat during the monthly open day at the Foulness Heritage Centre which I wrote about yesterday.

I didn’t even know tractor tours were available, and it was only Tom’s sharp hearing that overheard a conversation between ticket-holding people that we found out such a thing was possible.

And yes, a quick dash to the counter, which is actually the bar from the old pub, and we grabbed two of the last four tickets available for the tour — for a mere fiver each.

Having arrived early, it would be two hours until the tractor tour took place, which is enough time to do the museum, have tea and wander over to the sadly closed off church. 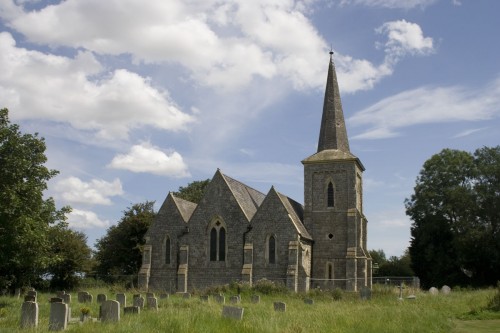 But it was just a seemingly short wait for the treat, and after a while the tractor turned up, hauling a trailer with straw bales for seating.

The local farmer who runs the tours asked us not to take photos of anything too overtly seeming to be secret on the site, but frankly we didn’t see anything that hasn’t been photographed a thousand times already, and not just by foreign spies.

But bums on straw bales, and off on the tour around the island — well, a little bit of it to see the most interesting place that a tour could offer. 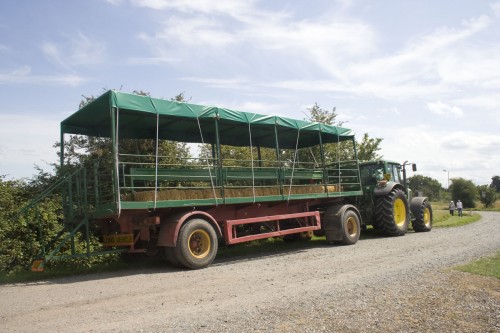 A windy afternoon did however mean that the tourists were regularly assailed by flying debris from the straw bales, and the tour guide was nearly inaudible from the back of the trailer.

Those discomforts aside, what could be nicer than seeing the flatlands of Foulness Islands from a slightly higher vantage point than normal?

Around gravel roads built on top of ancient sea walls, we slowly neared the main attraction, but first, some 70 year old concrete to pass by. Not just any old concrete, but German concrete, and Japanese, and probably some other countries in there as well.

These huge blocks were built during WW2 based on concrete mixes used by the enemy in their bunkers discovered by spies, and then fired at by British bombs to see how strong they were. 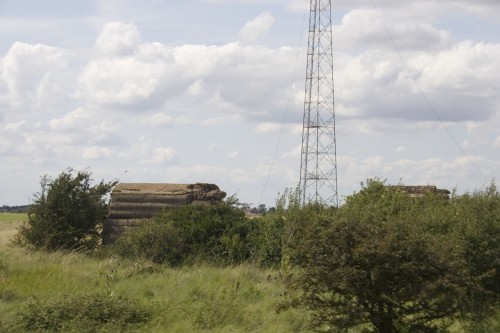 Barely a chance to see the long punctured wall — and the holes presumably suggesting that British bombs were better than German concrete — as the tractor growled its way along the paths.

For the destination to be seen is the Broomway — a public right of way across the mudflats that is often described as the “most perilous byway in England”.

The stone causeway is relatively modern, but the route it signifies is truly ancient and was the only way onto the island until the main road and its bridge was constructed in 1922. 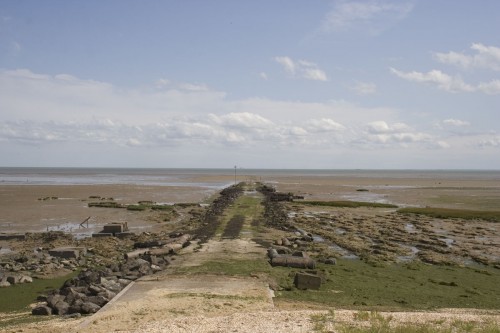 Today, only very hardy people, typically with a local guide would try to walk the Broomway, for not only is it a dangerous natural path, but it also runs through the firing range, and skill is needed to avoid walking onto debris, or quicksand type hollows left by exploding ordnance. 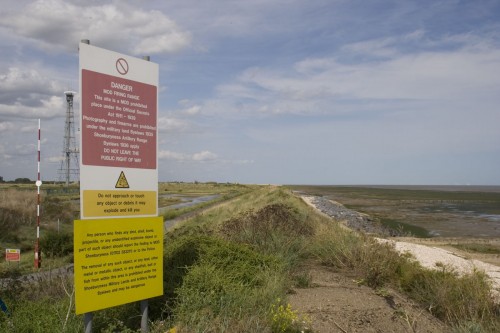 The causeway, probably more by coincidence than design happens to point almost directly at another military establishment — the Shivering Sands forts built in the middle of the Thames to shoot down enemy planes that used the river as a navigation aid to reach London. 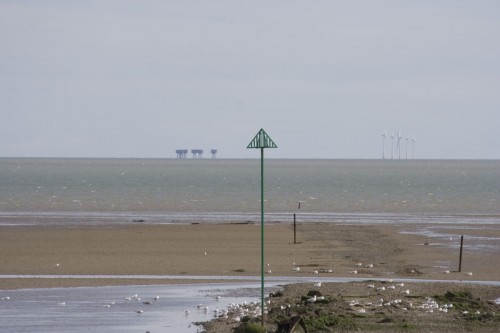 Also visible on the horizon, or dominating a good zoom lens camera, are the wind turbines of the London Array and the Kentish Flats, their ordered lines offering a regular beauty in the seascape. 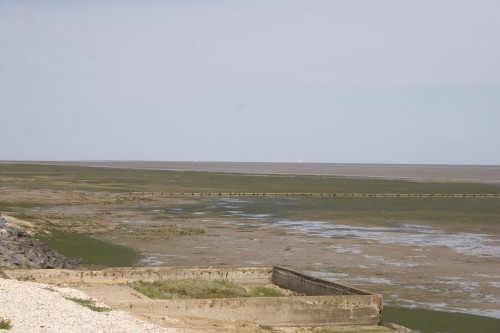 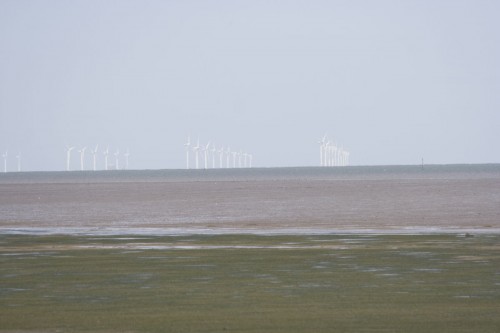 It wasn’t long for the grumbling tractor trip back to the heritage centre, but not before stopping off by a field owned by the farmer to check on the crop, and carry out a moisture test to see if it is ready to be harvested.

I suspect that Monday was a busy day for them, and had the weather been just a tiny bit warmer a few days earlier, then farming might have taken precedence over tourists, and no tractor tour would have taken place as they would have been far busier driving combine harvesters instead.

That short interlude over, and the trailer slowly made its way back to the village, but managed to go via the island’s only hill — a staggering 6 metres high — and which happens to be the only point on the island above sea level.

The cottage on the top of the small rise is aptly called Hill Cottage. 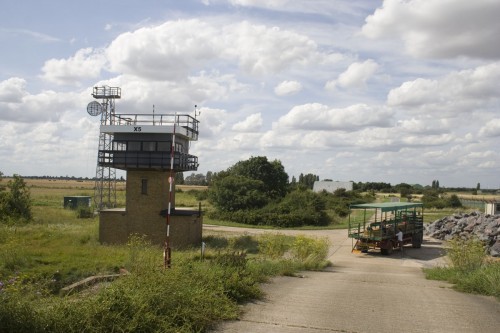 Back to the village though, to disgorge the 40 people who had managed to snap up one of the lucky tickets.

All the tickets sold out by around 12:30pm, so if you want to go on the tour yourself — which is weather and farming dependent, so not guaranteed — then you need to arrive early.

The museum is worth a visit in its own right, but the totally unexpected tractor tour was an exceptional treat.

As I noted yesterday, the museum is open 12-4pm on the first Sunday of the month between April to October.

Now, all that faced us was the long cycle ride back to Shoeburyness.