There’s a basement behind a gated entrance in plain sight but hidden from view in central London which conceals a surprisingly large museum.

One which gets a modest drip-feed of visitors who seek it out especially because they know it’s there. It wont be noticed easily by the casual passer by.

This is the Guards Museum, just a few minutes walk from the busy streets of Victoria and Westminster.

To find it is both easy, and difficult, just head to St James Park, and where Wellington Barracks stands, the gates are open, and you might notice signs about the museum, the shop and the chapel.

Ignore the impressive chapel — or pop in and admire it — for the museum is opposite, and down a flight to steps. 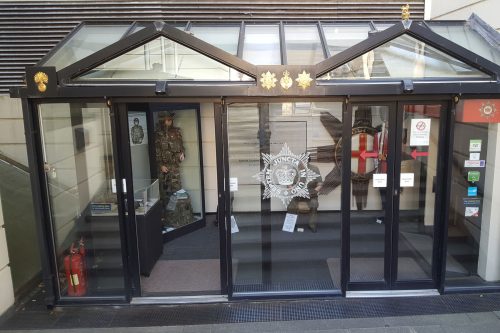 A few typically military ornaments on the outside, and in to a desk with a crisp officer sort taking entry fees (£6) and collecting bags. Photos and bags being forbidden inside alas.

It’s very much a “objects in glass cases” sort of museum, but with a lot of history and a lot of objects.

I started with modern history, with the recent conflicts in Afghanistan and worked back down the history of the regiments featured here, and it struck me how most museums that are laid out chronologically often start old and work towards modern.

Here it’s “backwards”, or at least so I thought until I realised I was going around the museum backwards. You’re supposed to start with the video presentation and work from conception to modern day.

That error aside, I still wonder why museums work from oldest to newest in their layouts.

The museum, when visited correctly, shows the history of the five regiments of Foot Guards namely Grenadier, Coldstream, Scots, Irish and Welsh Guards.

From the early days when Cromwell’s New Model Army was almost disbanded, but one part saved at the last moment became the founding of the formal army as we know it.

Expect to see lots of uniforms, ranging from garish and over the top through to the functional stuff worn when they finally worked out that bright red with brass buttons made a soldier rather conspicuous on the battle field.

As befits a military museum, the cases are arranged by significant battles, each case carrying a selection of objects related to the battle, and showing off how equipment had changed since the previous skirmish a glass case away from where you’re standing.

A lot of collectables as well, showing off the aspect of military life so often overlooked, the need for homely comforts, even in a foreign land that doesn’t want you there.

A sign from Afghanistan marking that it’s 3,200 miles in “that direction” to London. A note that on the 3rd September every year, a statue of a boy urinating into a fountain in Brussels is decorated in the uniform of the Welsh Guards.

Vast quantities of military ephemera, from Iraqi war playing cards to letters home, to clusters of medals for bravery or simply turning up, to the weapons used to defend, or maim.

Obviously a huge model of a steam train, the 6115 Scots Guardsman will command attention from some people.

But most fascinatingly, I learned that the bobble on the top of a bobble hat has a military background. Officially a type of Monmouth Cap, the woolen caps were worn under steel helmets. The bobble was padding to stop the steel hitting the soldier’s head.

So there you have it, a history of the military, including bobble hats, all hidden away in an underground museum just minutes from Victoria Station.