An ode to the London Underground

Today is National Poetry Day, and if you head through either Oval or Covent Garden tube stations today, you will be aurally entertained by more than the usual amount of prose laden station announcements. 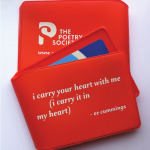 A poetry enthusiast and station supervisor at Covent Garden station, Pele Bapere has persuaded his colleagues and those at Oval Station to record a number of poems which will be broadcast from 10am to 10pm today.

Visitors to Covent Garden and Oval stations will also be able to get hold of a free limited edition Poetry Society Oyster wallet, and free advance copies of a special Poems on the Underground anthology, which is being published as part of London Underground’s commemoration of the centenary of the Great War of 1914-1918.

The anthology features poetry written by ordinary soldiers and their loved ones in response to the conflict, and all the poems have appeared on the Tube over the past several years, marking Remembrance Day each November.

At 11:30-12:30 staff in uniform will be joining passing Londoners in an open mic to recite their favourite poems in the Piazza in Covent Garden outside the London Transport Museum.

The First World War had a profound impact on London and its transport system. Nearly half of the Underground’s staff were recruited to serve and by the end of the war, more than one thousand employees had been killed.