Published 26 November 2016 by Events and Tours 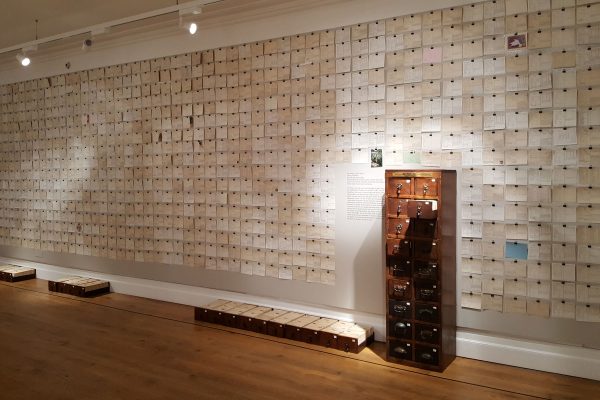 This is but a tiny fragment of the 36,000 small handwritten postcards collected by just one man, each containing notes about actors seen over a lifetime of film watching.

A wall of detailed archives that can be stood back and admired for its visual beauty, but move closer and it reveals a wealth of knowledge.

It’s part of an exhibition about the handmade archives, indexes and scrapbooks painstakingly recorded by filmgoers and cinema obsessives, from World War Two to the present.

Many hobbies attract the detail obsessive — famously the train spotter who catalogues the minutia of train movements, but the arty film world is no less filled with trivia, and people desperate to catalogue it.

One of the more famous people to have had a huge collection was Bob Monkhouse, and it wasn’t until after his death that the vast, almost industrial scale of his collection became apparent. Huge banks of video tapes, many containing lost TV shows, and annotations in the Radio Times correcting changes to shows that took place after the magazine had been printed.

One collector recorded not so much the films, but where reviews about the films appeared, and on what date. 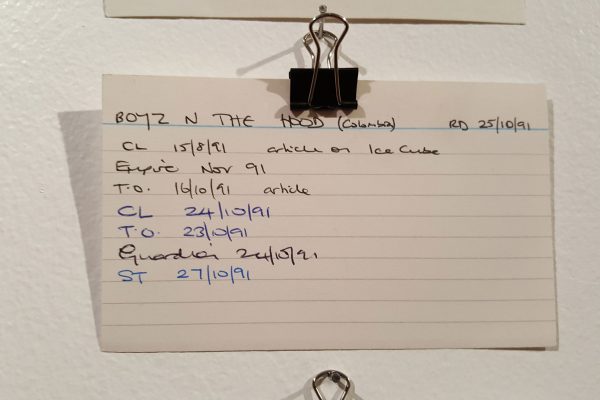 Another spent years visiting and photographing the cinemas themselves. 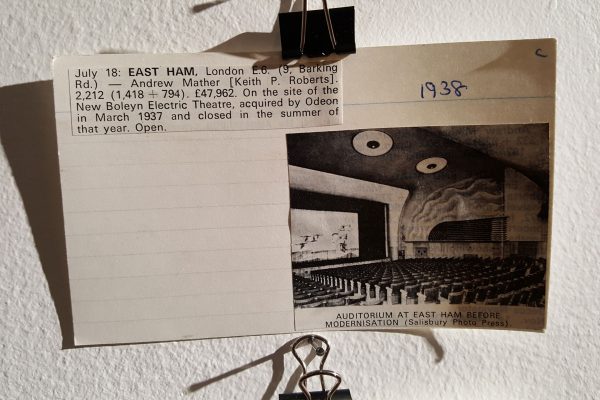 A cinema projectionist set up his own back-garden cinema, and in a tradition which the display card says wasn’t that unusual for projectionists, took a couple of interesting slides from each film real.

Here, they are carefully collected in little envelopes, often with notes about what the collector thought of the film. 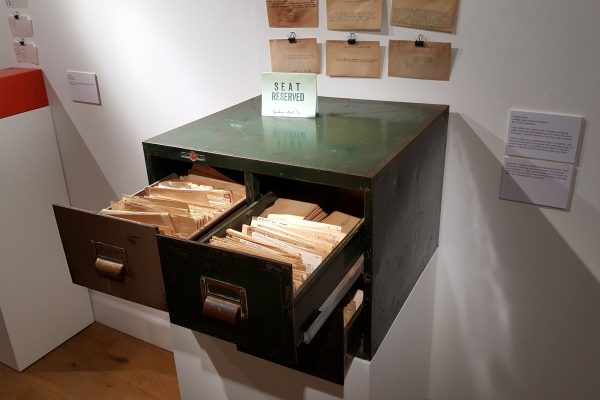 But turn around, and the tour-de-force of the display is almost overwhelming.

The main wall is the visual feast, the collection of Vic Kinson, who spend a lifetime cataloging the actors he saw in films at the Measham Empire.

He designed his own cards and had them printed in batches over the years, then hand wrote his notes, occasionally changing, or as can be seen, adding in later notes, such squeezing in titles for freshly ennobled knights of the realm, or the occasional dab of Tippex to remove mistakes. 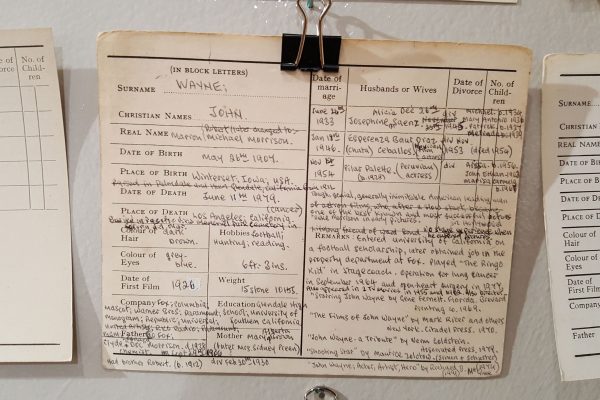 It’s a tangle record of information in a manner that is hidden from view today. We have vast databases of information, containing huge amounts of knowledge that’s available at a mere click of a computer mouse.

It can all fit onto a tiny memory stick and in doing so, we’ve come disassociated with the effort that goes into compiling the information. People pay for physical media, but expect it to be free if online, as if the effort of printing is all that is involved. 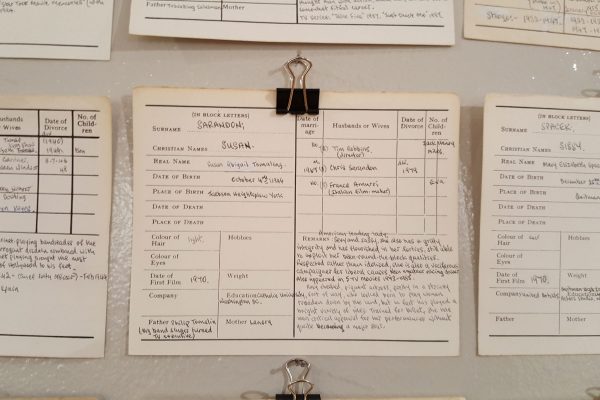 Compilation, and editing is the key, and here, that effort has been revealed in all its handwritten glory. Data as art, and here, the little cards each held up by a small bulldog clip are records, not just of who and where, but what the collector thought.

And what a glorious, if today, inefficient way to record information. Today, an edit to Wikipedia can be done by anyone from anywhere, and the publication is a santised opinion free world of facts that popup on cold unfeeling computers. Here is cardboard, here is creased corners, here is handwriting, here is personality.

Here, is something that you can in your minds eye imagine a man sitting at a table one evening diligently writing down his thoughts, and then putting cards into careful order within his hand-made cupboard. It’s tangle, it’s human.

There were times when knowledge had to be recorded, but blank cards were in short supply, so here and there, greetings cards are recycled from good tidings into records of cinema visits. 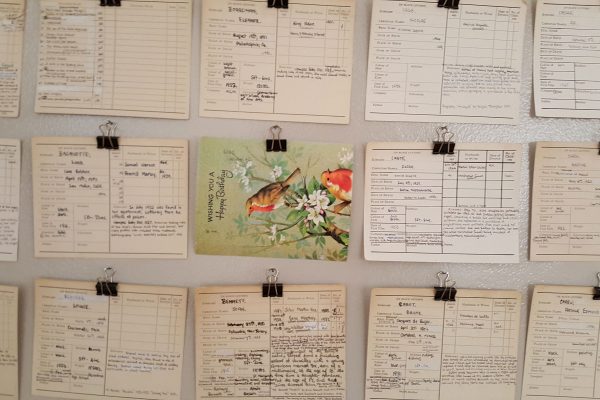 And they raise a question, is this every single actor seen, or was the collector being selective in who to record? No one knows as the records were compiled in total privacy. No one outside the family and friends knew about the collection until it was donated to the Cinema Museum. 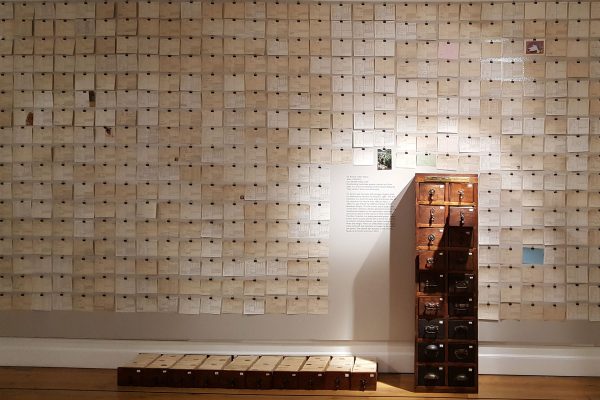 Here at last, nearly a lifetime of work is recorded, and at last we probably wont admire the individual cards, but the audacious effort that the whole represents. Stand back and take in an entire wall filled uniformly with the jottings of a cinema obsessive and let the sensation of that work, that effort fill you.

That’s what makes this exhibition such a moving experience, not the objects, it’s the lifetimes of labour they encapsulate.

Vic died in 2012, possibly untimely as the collection ends as it once started, with a collection of freshly printed cards. They’re still blank waiting for the master’s pen that will never arrive. 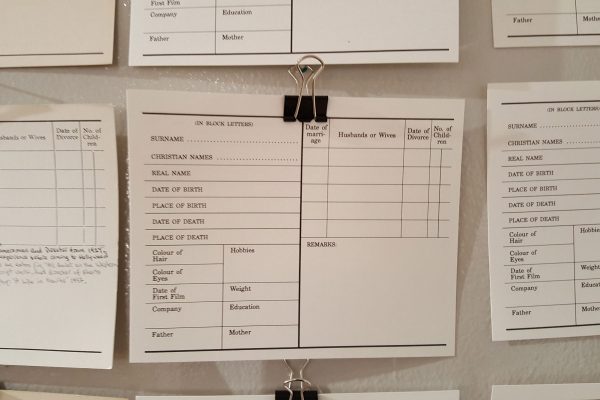 The exhibition, Cinephilia and Collecting is open Mon-Sat until 27th January at the Peltz Gallery, 43 Gordon Square, London, WC1H 0PD