Yesterday, I made my long planned return trip to the incredible All Saints Church in central London for a photo session with my tripod. I had been there before, but the lighting is so dark that it is not possible to take photos without long exposures – and that needed the tripod. After checking with the Church that was alright – I went back and spent about an hour there.

I had to wait a while as just after I set up my kit a lady walked in and started praying – and in small Churches I feel a bit uncomfortable taking photos while people are using the building for its official task. I am just a visitor after all. Amusingly, as soon as she had finished, she walked over to the Altar area, pulled out her mobile phone and took a photo of it. And there was I sitting behind her being polite and waiting for her to finish!

Anyhow, the Church is just to the north of Oxford Street, behind the HMV store (Google Map link), and I originally found it when killing time waiting for a friend to meet me for coffee and I saw the spire poking out behind Oxford Street, so went to have a look. There has been a chapel on the spot as it happens since the 1760’s, and a Tractarian congregation which was using the chapel agreed to allow a Church to be built by the Ecclesiological Society. Construction was started in 1841.

The Ecclesiological Society was a group who wanted to revive historically authentic Anglican worship through architecture – and boy do they hit the spot with this building! 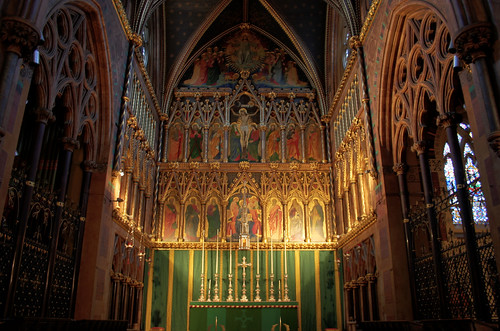 As it stands today, the interior is very, very dirty and doesn’t reflect the vibrant colours of its construction. However, that really does add to its atmosphere which is quite dark and gloomy, but importantly – without being oppressive. The selective use of lighting really works well to highlight important aspects of the Church and leaves the rest in atmospheric shadows.

There is a restoration project underway at the moment, and it will be quite a sight when fully cleaned and preserved.

Photos on my Flickr account as usual. I did a lot of HDR photos, as the Church is so dark that normal photos wouldn’t show any of the detail – so the Church looks brightly lit – but I assure you it is a lot darker in reality. Indeed, I saw more detail in the photos than I noticed when I was there in person. I also took a load of photos of the exterior some months ago, so didn’t take any on this visit. Annoyingly, I now can’t find those earlier photos – so will go back in a week or so to take a few exterior shots. Damn. 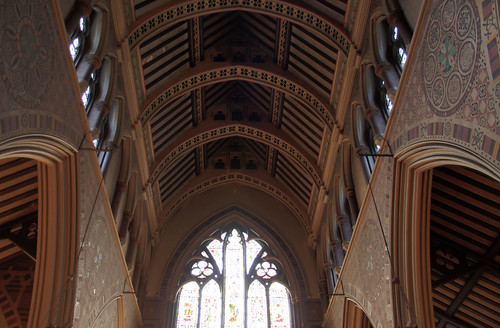 There is a short history of the Church on their website – and they sell a quite informative guide for Â£2 inside the Church itself.

I have been there on two Saturdays at roughly the same time – and both times the Organist was playing/practicing – so if you are planning a visit, try going at about 1pm just in case this is a regular occurance.