Just after Christmas, the distinctive wail of an air-raid siren will once again echo out across the City of London.

To mark the 75th Anniversary of the biggest “Blitz” raid on London — The Second Great Fire of London — The City of London has given permission for an air raid siren to be sounded at 18:05 on 29 December.

This will be followed by an escorted “Blitz Turnout” when WWII vintage fire appliances will leave Dowgate Fire Station (Lower Thames Street) and circuit the City “on the bell”.

Update: May now be a hand-cranked siren rather than a big one, due to concerns about people being worried by the sound.

The vintage fire engines will be on display earlier in the day, from 10:30am outside the front of St Paul’s Cathedral.

There will also be events at Dowgate Fire Station at 1pm, where fireboat Massey Shaw expects to pump water from the Thames through its deck outlets and from its iconic main monitor which can produce 3,000 gallons per minute at 100psi.

Massey Shaw served the London Fire Brigade during the Blitz period (1940 – 1941) and is credited with helping to save St Paul’s Cathedral after significant bombing to the surrounding areas.

Due to water mains being damaged during the raids Massey Shaw’s significant pumping capacity was utilised to pump water from the River Thames up the street towards the land based units to help put out the fires.

Massey can pump water continuously for up to 36 hours on one tank of diesel and was used by the London Fire Brigade between 1935 and 1971.

The Massey Shaw is seeking to raise £750 to support running costs for this event. Any companies, organisation or individuals who wish to sponsor this event can contact [email protected] for further information.

The famous photograph, St Paul’s Survives, was taken from the roof of the Daily Mail building by Herbert Mason on the night of the 29th December, during the air raid being remembered on this event. During the raid when the photograph was shot, more than 160 people died, over 500 were injured, and hundreds of buildings were destroyed. 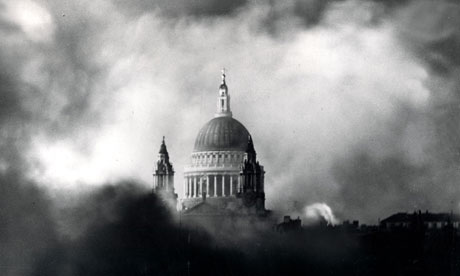