The station was known to be due to open in “late October”, and an accidental leak of the opening date of 23rd October by Bexley council was swiftly removed from their website.

Having been unable to verify the exact date, and sadly with mobility slightly impaired at the moment, your correspondent was dependent on a report by Diamond Geezer that the station did indeed open at the weekend.

It’s not entirely finished, but it’s open for users of the existing train services that ran through here already, with the Crossrail works still carrying on next door, with those lines due to open next December.

This is a little early present for the Abbey Wood residents.

Unsurprisingly though, most of the attention focused on Crossrail has been on the new underground stations in the centre of London — vast new stations with delightfully curvacious corridors.

As wonderful and huge as the new “tube” stations are underground, as they rise up to street level, the result is more of a generic station building. Although each station will be decorated differently at surface level, they are almost entirely basically a box with an office block on top.

When the Jubilee line extension was built, while the tube tunnels are not much different from any other tube line, the ticket halls were allowed to shine. An uplifting delight as you ascend the escalators to the complex at Southwark, of the blue atmosphere at Nth Greenwich, of the concrete box at Bermondsey. And who can’t fail to be amazed on their first (and many futures) visits to Canary Wharf?

The Elizabeth line is proving to be almost the exact opposite — with the wonderful deep below ground at the massive tunnels and curved concrete decoration, but the ticket halls could have been repurposed retail outlets or fancy coffee shops.

The sole exception is Paddington, which could well rival Canary Wharf station for the sheer grandeur of the entrance, with its huge open plan construction and glass roof permitting dappled daylight to reach down to the deepest levels.

Canary Wharf looks impressive, above dock level, but that’s mostly the oversite development for the shops and the roof garden.

But the rest of the central London stations are basically boxes for offices, with the ground floor given to the ticket hall. This isn’t a major surprise as tube stations are almost always built with oversite developments intended to be added, and thanks to their central locations, all of them have buildings going on top immediately.

That’s a marked change from the Jubilee line extension, which is still waiting for an oversite development at Bermondey, although plans are now underway for work at Southwark and North Greenwich.

Canary Wharf was never intended to have buildings on top, and is built inside an old dock had been expected to have the top flooded again to recreate the lost dock. Fortunately, that was abandoned, and a much more useful park was put on top instead.

The new Elizabeth line stations in central London are incredibly impressive, but mainly at the deeper level, as the ticket halls are decoratively pleasing, but not impressive structures.

Yet, most of the actual stations that will form the new Elizabeth line already exist, as they are National Rail stations that are getting upgrades to cope with the increased passenger numbers.

For some it’s little more than a lick of paint, others get new footbridges that include lifts. Most get revamped ticket halls, and forecourts are cleaned up to make them more pedestrian-friendly.

Some are getting entirely new ticket halls, but, these are generally not much more than glass boxes. Much larger than the often dingy old ticket halls, and a major landmark for the local area, but frankly, mainly, they’re glass boxes and that’s about it.

Then we come to Abbey Wood.

What on earth happened here? 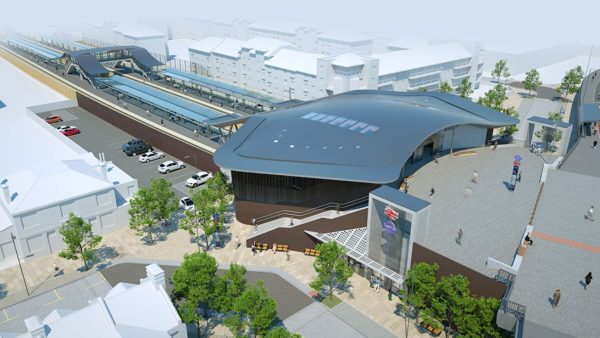 No mere glass box for Abbey Wood, but a zinc Manta-Ray biting onto the side of the main road and long sinuous tails sloping gracefully down to the platforms and rising again at a far set of stairs.

Exposed wooden beams inside show off the gently curved ceiling with dark stone flooring adding a colour contrast with the lightness above. 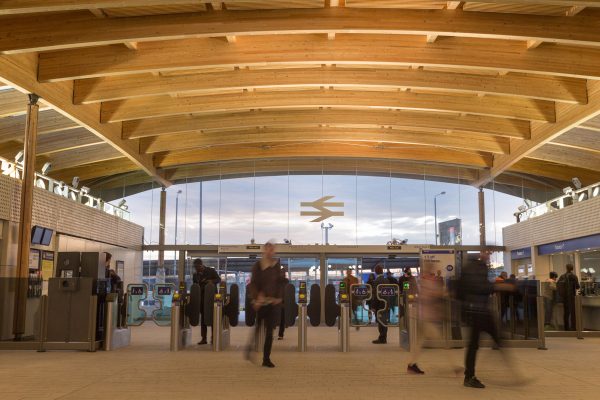 Outside, the grey manta ray skin has been lifted up by warm wooden slats on a dark brick foundation, and two sets of wide stairs connect the new ticket hall with the modest parade of shops nearby, which was recently rebranded Abbey Wood Village.

To hit the “late October” deadline for opening the ticket hall, the lifts aren’t ready yet, and outside it’s still much of a building site, but for the local community which has put up with decades of neglect, this opening can’t have come soon enough.

Abbey Wood has long been a bit of a runt of a station, with an ugly steel box and nasty walkways to get from the main road down to the station level. All that has been swept away and elevated. The ticket hall no longer down below but up high, creating a landmark where all was windy 1970s concrete.

The building isn’t tall but flattened and yet with its elevated location, it stands out, clean and glossy in a region that has until recently lacked much in the way of regeneration. 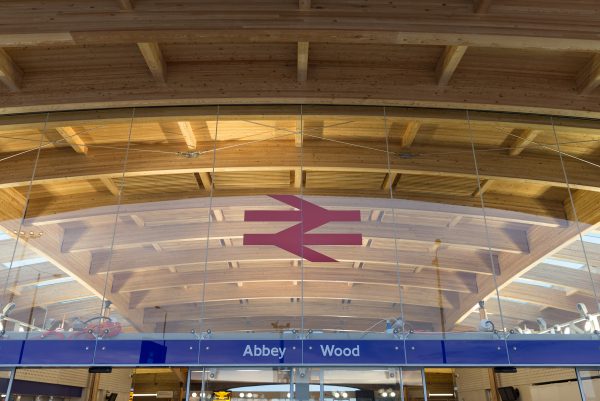 Considering this is a terminus for the Elizabeth line and should also be a suitable location for an impressive terminus station, the ticket hall is modest in size. It’s larger than its predecessor, but still managing to retain a human scale about it, without being too overwhelmingly grand.

Sadly though, around half the people who will get off the Elizabeth line trains here will never see the ticket hall. For them, the station will consist mainly of stairs, an escalator and a footbridge as they swap over to the SouthEastern trains heading deeper into Kent.

The locals have gained a delightful station, and I suspect, a lot of architects and train geeks will pay a visit to admire this most unexpected jewel in Crossrail’s crown. 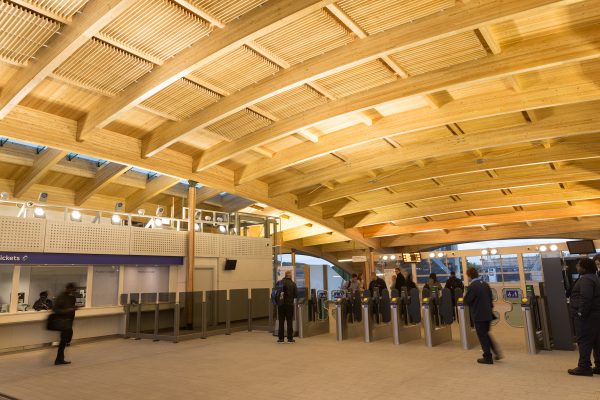