Published 28 September 2012 by Events and Tours

I would have visited more, but the booking system debacle left me in a dilemma as I seemed to have tickets to other venues, but they were from before OH switched to the ballot, and the confusion about whether pre-ballot tickets were still valid took two weeks to get a reply from them. Not knowing what was going on, I had by then decided to work as a SubBrit volunteer at the Neasden Bunker on Saturday instead – so I ended up being one of the apparently considerable numbers of people who didn’t turn up to pre-booked events.

Anyway – Sunday was free and I had two venues to visit.

The pumping stations collects sewage from the Northern sewage pipes and lifts it up to then send it down to the Beckton sewage plant. The two are linked by a Victorian tunnel, which is currently in the process of being upgraded, and more about that another day.

The day started at the Beckton plant, with an introduction into how the place processes the wastes we send their way. Around 200 tons of sewage is processed each day by being burnt in a power plant, but that is a tiny percentage of the total volume of sewage in the plant at any one time.

The biological process of cleaning the sewage removes so much energy from it that it isn’t that useful as a fuel. Nonetheless, they manage to generate about a third of the electricity used by the sewage plant. 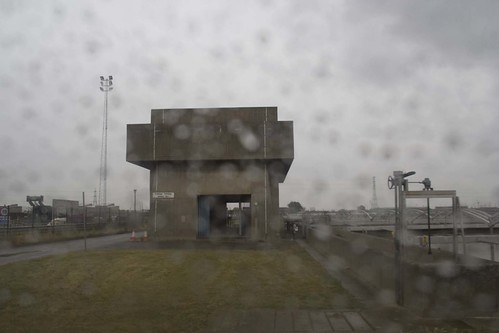 Although the sewage plant dates back to Victorian times as a location, what is here today is largely from the 1960s, with a brutal concrete design which either repels or attracts. I quite liked the outcrops of brutal concrete in a landscape which has odd patches of industrial wasteland around it.

One spot to stop and get out of the bus though was the filter system that tries to stop plastics and other icky things getting into the filter beds. This was one of the areas where the acrid smell of human poo was most noticeable. They are currently working on rebuilding works that will cover the smelly tanks with lids to stop the smells getting out. Such is the impact of having a shopping centre built next to your sewage plant. 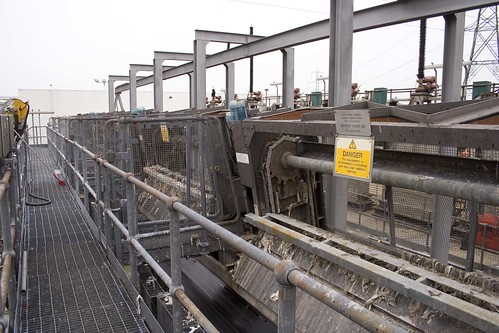 The smell aside, once you get over to the famous round tanks that are such an iconic image of sewage plants, the water is sufficiently clean that ducks and seagulls preferred them to the Thames.

It’s just as well that the water is cleaned – as the venue is also the location for Thames Water’s desalination plant that takes Thames water and makes it drinkable. 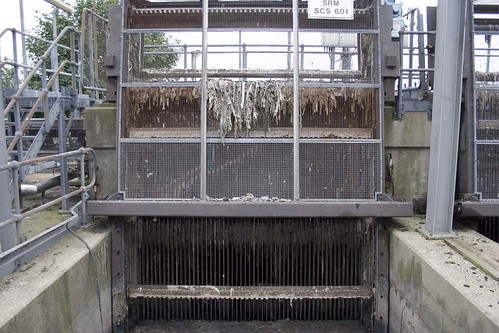 A stop at the future Lee Tunnel construction site, then the tour around the site was over, and time to head over to the other end of the Lee Tunnel – the Abbey Mills Pumping Station.

Rightly described as a “cathedral to sewage”, this the counterpart to its southern partner in Crossness is one of the great examples of Victorian industrial design. Unlike Crossness, which open several times a year as a heritage site, Abbey Mills is still a functioning pumping station, and rarely open to the public. 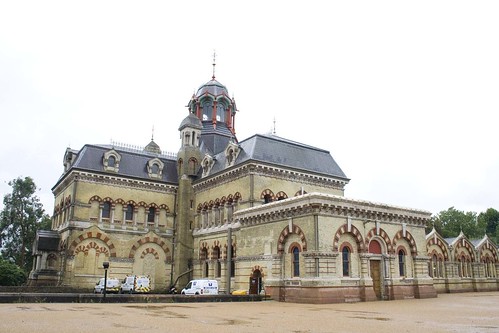 Situated next to the Greenway, this building has teased passers by with its ornate brickwork and decoration, protected by barbed wire and high fences. When originally built, it was powered by coal, which would be delivered by barge and loaded up next to these brick arches – which are in fact the overflow outlets.

Around 40% of the untreated sewage that overflows into the Thames when there is too much arriving via the sewers comes from these rather nice arches. 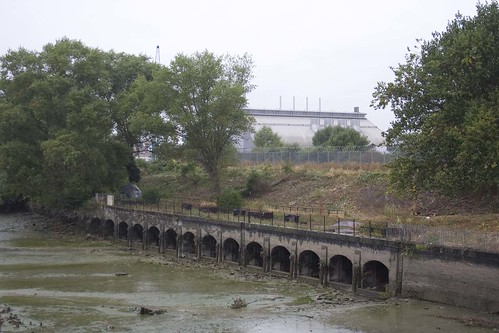 Due to the incessant rain, the tour around the outside of the building was curtailed to a short run around the exterior and a short stop on the gravel forecourt that covers the original coal pits while the wind tried to flatten us.

It’s the interior though that has teased people walking past, and while the Victorian steam engines have long since vanished, the motor heads remain — looking very much like stylized Daleks — and driving pumps below that connect up to gigantic iron pipes carrying our effluent down to Beckton. 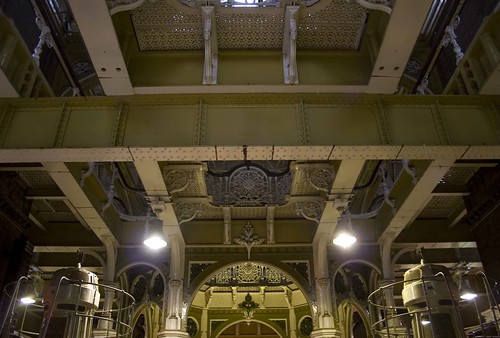 The whole building has been painted a rather muted green, which is a sharp contrast to the original red and gold that would have been here, and has been restored at Crossness. As such, while the ironwork is impressive, the detailing is slightly lost in a sea of pea green metalwork. 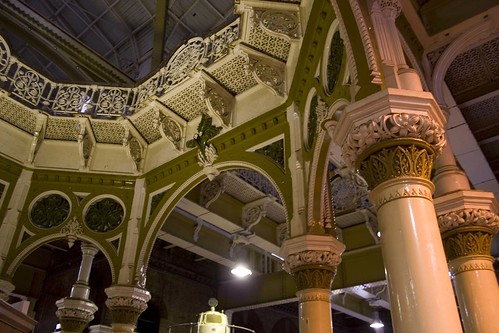 One thing I had no idea existed though, is the Thames Water archive. I am familiar with documents held at other venues, but had no idea that the original documents are here, and purred rather agreeably when shown into the room piled up with books and documents. 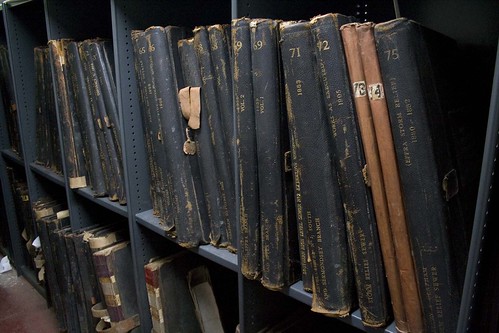 Turns out this archive is accessible to researchers, so that’s one more to add to my list of resources when carrying out my historical hunting. 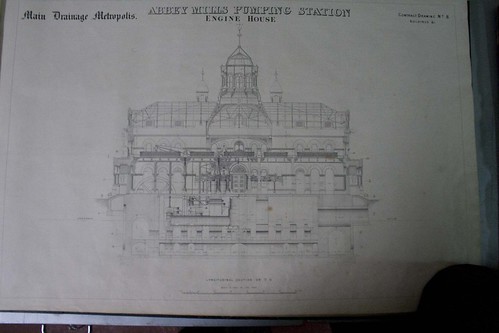 As is not uncommon with tours of sewage sites, the guides are rather keen to explain not just the heritage, but also modern problems. While cooks pouring hot oils down the drains are a well known, if often ignored problem, I had no idea that people regularly flush babies nappies down the toilet. Babies nappies don’t degrade in sewage works and have to be trapped out of the pipes here at Abbey Mills.

While the brick cruciform building is the most famous aspect of the pumping station, there are in fact several pumping stations on the site, some disused, but more modern ones augmenting the Victorian original.

Some rather odd looking “mausoleums” are the stumps of the original tall chimneys that dominated the site when it was powered by coal. They were demolished during the war, not because of the urban myth that they acted as a landmark, but because if they were hit by bombs, the collapse of the chimneys could have destroyed the pumping stations. 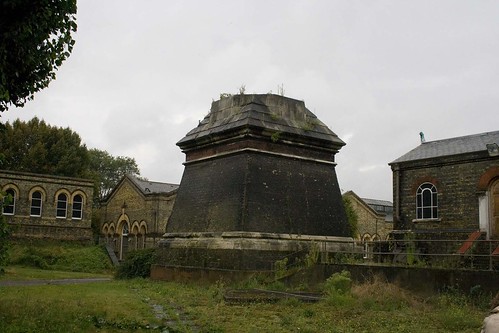 If the archive wasn’t enough to excite though, by the main entrance hands a vast map of London with all the sewers marked out as they were in the 1950s. 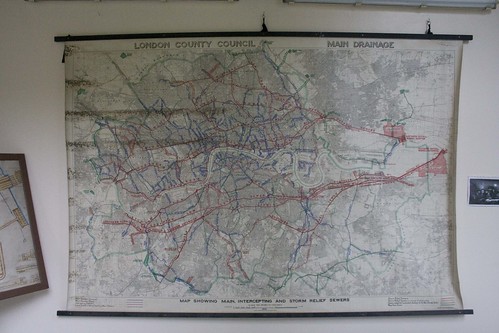 Leaving the pumping station and heading back via the Greenway, the earlier mentioned overflow arches were doing their stuff – as the days rain finally overloaded the system. 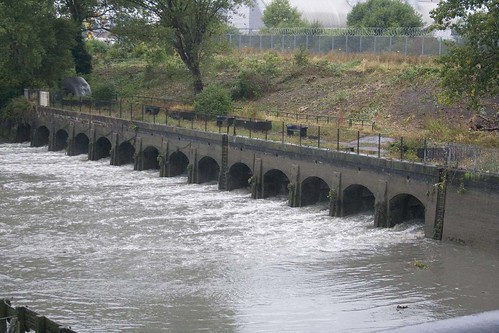 That’s why the Lee Tunnel is being dug – and more about that another day.