A trip with the archaeologists on the River Thames

Published 20 February 2011 by By Ian Mansfield Events and Tours

“The remains are only visible at very low tide, and the rain over the past few days may have raised the river level so we can’t see anything” was the warning given as a group waited by the MI6 building for a special visit to see some ancient remains in the river shore.

However, I doubt anyone expected what was about to happen later in the morning.

Thanks to the Thames Discovery Programme, a group of deeply interested persons (identifiable by wellies, trowels and greetings of old friends) and a few keenly curious types (such as your correspondent), were told to meet up at the MI6 building at 9am, in time for the lowest point in the tide at 10am.

A couple of police motorbikes came down, but not to check us out, but on a routine inspection – which was oddly disappointing. We wanted to be quizzed as suspicious lurkers!

Rather than spooking the spooks in the building, we were actually there to get a chance to see some Anglo-Saxon remains, then some Bronze Age remains, and finally the most recently discovered Mesolithic remains that line the riverside in Vauxhall.

Obligatory health & safety message over – basically, try not to sink into the quicksand or drown please – and a brisk walk along the river from the slipway next to the MI6 building.

Past the mechanical exits that marks the River Effra’s entry into the Thames on either side of Vauxhall Bridge, and the remains of a celebratory bottle of Moet et Thames in the mud. 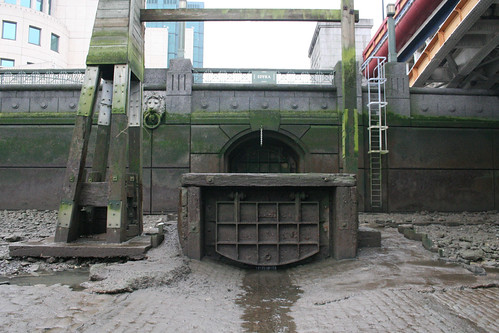 Please jump over a large channel cut into the gravel shore by a drain – and don’t get stuck in the mud on the other side, then along towards a jetty. Walking along, on top of 19th century “concrete” caused by the industrial run-off from a plaster factory that used to line the river here.

Finally, after disturbing the geese, we were at the first of the “exhibits” – an easy to overlook set of smallish wooden posts driven into the ground. 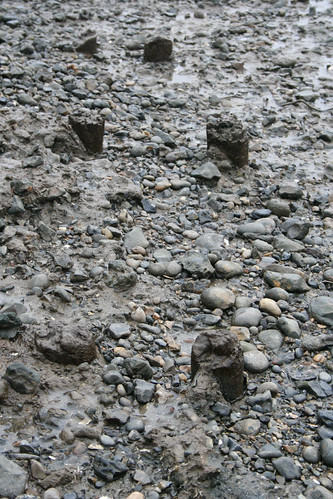 What you are looking at is an Anglo-Saxon Fish Trap.

Basically, a line of posts in the river – typically between shore and a river island then filled in with willow or other suitable semi-porous lining. As the tide waxes and wanes, fish are caught along the “wall” and are trapped for collecting when the tide drops.

What is unusual about this Fish Trap is that it is made up of a double line of posts – and probably with a thicker layer of matting between them. It is thought that these were used to create not a single line between two shores, but a V shaped structure were no convenient island existed to cause a blockage. The fish were funnelled along the V until they were trapped at its base.

Quite effective – albeit rather dependent on the fish not buggering off somewhere else. 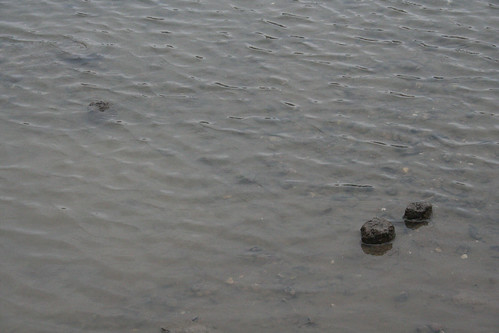 You should just see the line of posts continuing under the water in the upper left of the photo.

Heading back along the route we had just walked, we came upon one of the more famous of remains on the river – famous due to being the subject of a Time Team (London’s First Bridge) TV show in 2002.

It was the show that funded the dendrochronology needed to show that this was in fact not Anglo-Saxon, but even older – Bronze Age, or about 3,000 years old.

Obviously the big question is – what on earth is this structure, made from substantial oak posts and what was its purpose. The posts are laid out in a rectangular form, and the current thinking is that they form a low level jetty that may have linked up with an island in the river. It is certainly strong enough for a lot of people and animals to have used. 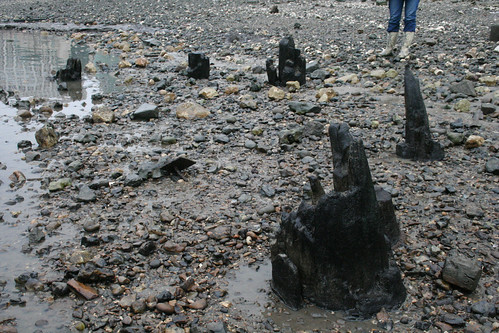 The TV show removed one of the posts – and put a modern one back in its place. At the time, that was buried down to the same level as the shore, but over the past decade, the river has eroded a rather alarming 5 inches of gravel – exposing the modern post – and more of the older posts. 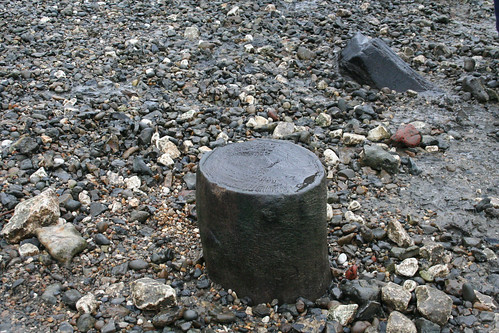 This recently surge in erosion has an upside though – it’s uncovering previously buried structures.

Indeed, as we moved off, it was pointed out that something very exciting had happened – another smaller post made from elm has only just been uncovered by the ongoing erosion of the Thames.

About 20 feet downriver, the post showed very clear signs of having been worked on my ancient humans, with marks showing the slicing action of old axes used to clear off the bark and shape the post.

The archaeologists with us were very excited by this new discovery as you can imagine. 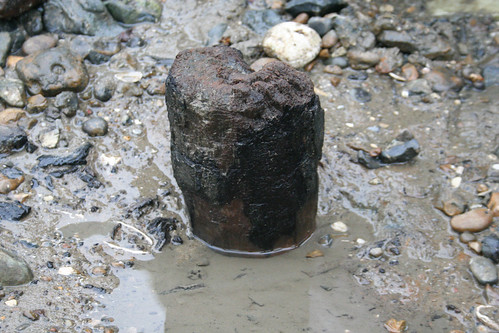 We were however up against the time and tide and had to trot along to the even older Mesolithic remains – which are right outside the MI6 building.

Here we were able to see a couple of piles rammed into the ground right next to the river. Contrary to the fears about the river level mentioned earlier, we were able to get quite a good look at the wooden posts as the water was quite low.

As I am sure we all know, the river was in the past somewhat different from today – wider and and shallower. But, in the Mesolithic period – about 6,000 years ago – the Thames didn’t even exist here, it was about a mile or so further south and over the next 3,000 years migrated north to its current location.

So, the Anglo-Saxon and Bronze Age remains were based along the river – but these Mesolithic remains would have been built on dry land, a fair distance from the river. 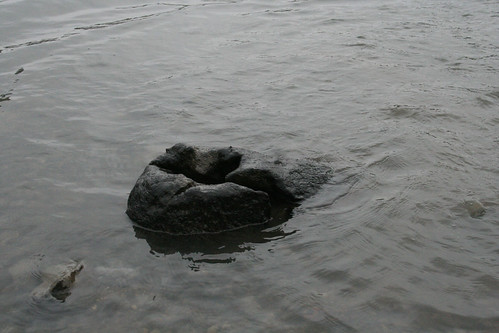 That is actually quite important as Mesolithic humans were thought to be more nomadic and unlikely to have built many structures – so whatever these posts supported would have been very important.

Now things got exciting as another small post was discovered, coincidentally close to where an axe head had been found just a few weeks ago. As people had a good look, two archaeologists got very animated as they filled a couple of buckets with water and then brushed off two large oak piles that had only today been uncovered. 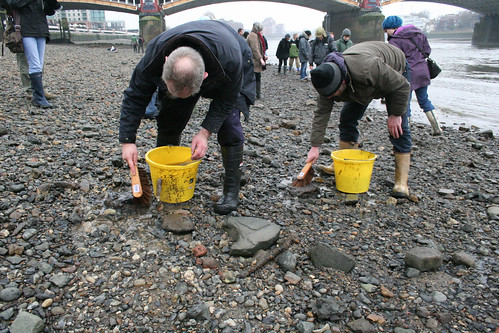 Then a cry of excitement, as a possible artefact was found – and yes, it turned out to be a piece of flint that had been worked on by Mesolithic man. Not an actual axe, but a piece of scrap that was cut off a larger piece. Although not hugely rare, it is important as it shows that someone was settled enough to be shaping flint blades.

Later on another similar piece was discovered by another member of the team. Oh, and also a piece of antler horn. 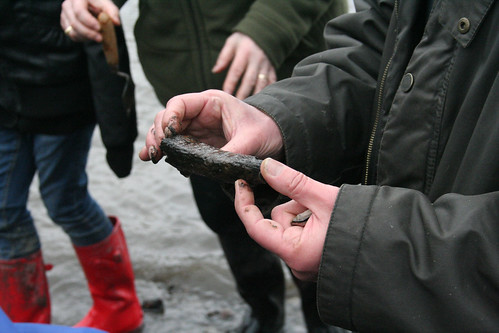 As if that wasn’t enough, they then found another post in the river that hadn’t been seen before.

This trip was proving to an embarrassment of riches!

What was supposed to be a casually interesting visit along the river actually ended up being an almost Time-Teamesque exploration of the river as discovery after discovery was made. It’s not often you are present when something that hasn’t been seen for thousands of years is revealed for the first time, but this morning, that happened.

Although anyone can walk along the river shoreline at low tide – if you want to do anything more intrusive than use your eyeballs to scan the surface, then you need a license from the Museum of London – who had also sent one of their chaps along to keep an eye on us and regularly say “not been shaped by humans” when shown a piece of flint someone thought looked interesting.

There will be a guided foreshore walk later next month – booking details here – although you shouldn’t expect to find as much as we did today. It really was quite exceptional.

More photos at the usual place. 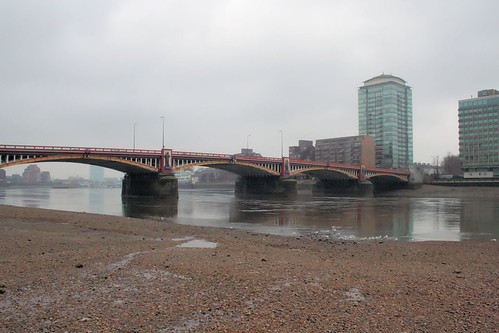