A tour of the London 2012 Olympics Site

Today marks the one year anniversary of the start of construction at the 2012 Olympic site, and various illustrious celebrities and notable persons will be donning hard hats and high-viz jackets to pose for the media. Yesterday, a bunch of significantly less illustrious persons got to also visit the Olympics venue, within a bus driving around the site.

The Olympic site is being managed by two different organisations, the Olympic Delivery Authority, which is handling the construction work – and the London Organising Committee of the Olympic Games (LOCOG), who will take over once the paint is dry to manage the event itself. It was the digital people at LOCOG who decided to take a group of London (and one out of towner) bloggers to have a look around the place.

We were not allowed off the bus, but as the site is normally off-limits to random visitors, it was a good opportunity to get up close and moderately personal with the building site and get a view of what is going on.

They are currently in Phase 3 of the site programme, which is the construction of the site which will continue until 2011.

Phase 1 was the formal planning application and Phase 2 was decontaminating the site with very large washing machines for the soil. Once the site is built, Phase 4 comes into play, which is where lots of volunteers get to play at being visitors to test the venue and make sure everything works (I did similar for Eurostar and Heathrow). Phase 5 is the boring title given to the games themselves, then a final Phase 6 to hand everything over to the subsequent owners.

Going in via the north entrance to the site, which is also the main entrance for any deliveries not coming up by barge, the bus drove casually round the site whilst a commentary about what the big piles of the earth will be at some point in the future. The commentary was augmented by on-bus TVs which showed what the building site will look like – subject to Boris not changing the plans again. 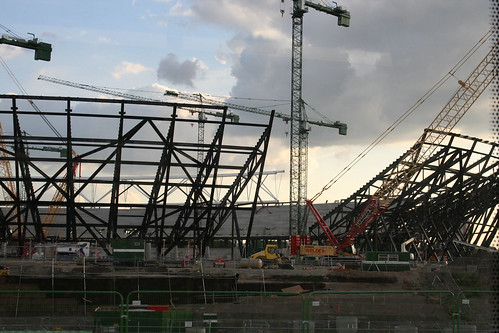 As we stopped to look, from a distance at the Stratford International train station (which I have been inside), it was pointed out that all visitors to the site will be expected to use public transport and there will not be any car parks. Personally, I suspect that there will be a few small ones dotted around for VVIPs. Dave Cameron may take the tube occasionally right now, but I doubt Prime Minister Cameron will be allowed to get to the opening ceremony by DLR – or Her Majesty either!

Mentioning the barges earlier, the site is crossed by a couple of tributaries of the River Lee, and this is being widened in places for the barges to use it. Much sniggering when it was explained that the wildlife was removed from the river by electrocuting the fishes, so they could be relocated elsewhere. The same for the infamous newts that appeal so much to Ken Livingstone.

It was also pointed out that the Museum of London have been crawling over the place recovering artefacts (they held some public talks recently) and that some skeletons were removed. The bodies won’t be reinterred on the site, which I think is a bit of a pity personally. The site has been largely scrubbed free of any vestige of its history, and a token reburial of the dead would help remind people that the site has a heritage.

In fact, the only bit of heritage remaining on the site is an old mill, which sits next to the power station and will later become a visitor center. The power plant aims to get 20% of its electricity from renewable sources, such as bio-fuels and a single large wind turbine being erected just outside the Olympic Park. The wind turbine, which will be 130m high has already being nicknamed the Angel of Leyton!

The bus eventually made its way round to the centrepiece of the site – the still under construction main stadium. Despite having seen quite a few maps of the site in the past, for some reason, the presence of the river running around three sides of the stadium hadn’t registered, and even in the current construction state, that aspect of the area already looks like a really excellent decision. 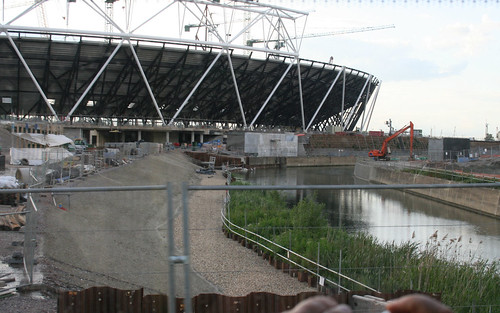 Off to have a look at the aquatic center which is already rising up – having also seen the cores for the blocks of flats which will make up the athletes village, and from a distance, the ubiquitous shopping center. 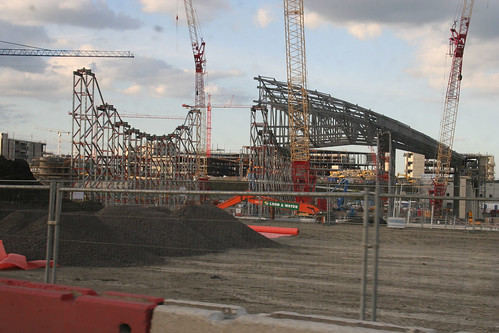 The aquatic centre sits between the stadium and the main entrance from the train station, so a huge bridge will rise up over the centre and down to the stadium again. The views from the top of that bridge will probably be stunning.

Eventually, ducking down under the Greenway, which is still open to the public, we left the site by the southern exit.

I went on a walking tour of the site the weekend before it closed to the public, and the only thing which was even vaguely reminiscent of that earlier visit was that road under the Greenway, even though that has changed a lot with concrete reinforcing (and the piles of scrap tires have long since vanished).

There are about 20,000 people working on the site, and despite the nature of the work, there haven’t been any significant injuries – which is actually quite impressive.

During the games, some 70,000 people will be needed to volunteer on the site – applications opens next year, although you can pre-register now.

All told, the tour lasted about an hour, and it was very good of the organisers to invite us along to have a look, and much appreciated. The only slight suggestion would be that being inside a bus meant that most of the photos were a bit meh – maybe an open top bus next time?

In addition to my photos, there are also webcams dotted around on the site.

If you live in Greenwich, there are similar bus-based tours available – details of the next one on my events listings, and there are also walking tours every Saturday around the outside of the site, which includes getting quite close to the stadium on the Greenway.