A tour of Aldwych Station on the London Underground

Earlier this year, I along with a group had a rather rare tour of the disused Aldwych tube station. We were actually supposed to go somewhere else as part of a special deal arranged with the Friends of the Transport Museum, but a long story and a lot of problems resulted in our going to the iconic Aldwych station instead.

Of all the disused stations on the London Underground, this is one of the more famous – partly for its construction and its rather odd position on the tube network infrastructure.

I won’t go into huge amounts of detail about the history of the station as there are plenty of online sources available, and I am reliably informed that a new book on the station is due for publication before the end of this year – doubtless to be sold in the book store inside the Transport Museum.

As a courtesy, we were asked not to put the photos into the public domain as it only leads to people bugging the museum for permission to visit it themselves – but today I became aware that they are actually auctioning off a tour for the general public to raise funds for the museum, so they can’t really complain now 😉 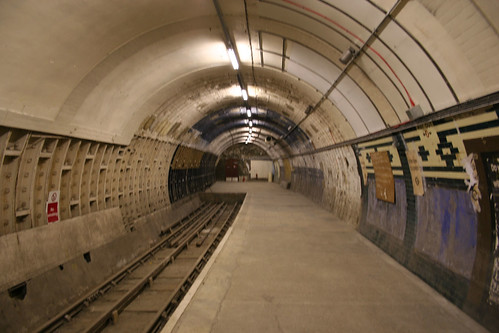 Also, I thought I would put up a few photos as teasers of what is down there and you might be tempted to bid for the tour yourself. If you want to bid on the auction to go inside yourself – then it is being run on the ebay website.

The full photo set of the photos which came out (damn the blur and useless flash!) are now available to the public on my usual Flickr account.