Sitting inside a park in North London lies a former stately home which was during World War II, one of the main command centres for the Battle of Britain. 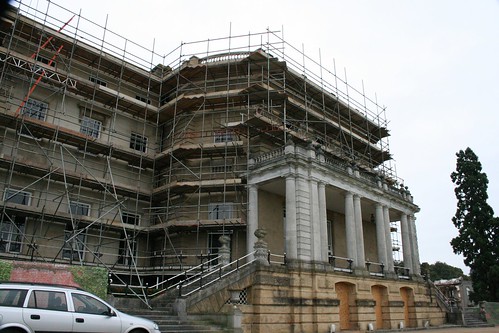 RAF Bentley Priory, or plain Bentley Priory as it is know called sits on a site that was on the edges of an actual priory that owned a vast swathe of land in the area from at least 1120 until the dissolution of the monasteries. The location of the original Priory was convenient for travellers being about a days ride from London at the time – and was described as being the “motorway service station” of the medieval era.

Following the dissolution, the Monarchy held onto the land, but eventually sold in 1766 to a military uniform supplier, James Duberley who built the core of the building. The building passed though several owners, who each added or amended the original building, including extra outbuildings. One owner even swapped the building around so that the grand front entrance became the private back garden, and a smaller front door built around the back.

Sold to the Air Ministry in 1926, it became eventually the headquarters for the newly formed RAF Fighter Command – which oversaw the Battle of Britain.

The Royal Observer Corps also moved to the building as they were a key component of Fighter Command and remained there right up to 1995, when they were disbanded following the end of the Cold War.

The site itself was finally closed as a military base on 31st May 2008 and was sold to a developer to convert into luxury flats.

Fortunately, the planning permission required that the ground floor and basement are converted into a museum, and the Bentley Priory Trust took a few people round the building site for a look at the conversion works.

A brief talk about the history of the site and the usual admonishment to keep hard hats on, we went into what most people treat as the ground floor, although actually it is the 1st floor as seen from the original front entrance.

Time though to wander round to the current front entrance and admire the painted ceiling, which is almost perfect thanks to having been covered in whitewash at some point in its history and uncovered by the RAF when they moved in. 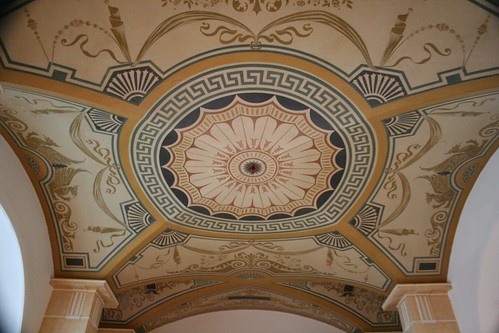 Sadly, the grand staircase was covered in carpets to protect it – but there is an interesting story here, as the staircase is actually a modern replica. During previous restoration work in June 1979, a disastrous fire tore through the staircase room and totally destroyed it – as well as damaging the surrounding rooms.

The replacement staircase was built, although some of the ornate iron work was replaced with plastic replicas by the cost-saving RAF, who were less beholden to heritage bodies than most of us would be. 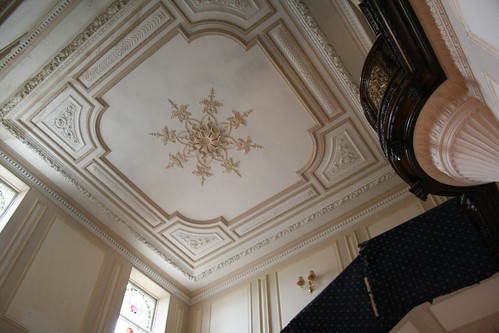 More impressive though down the corridor is the round trophy room which will be restored to its original function with the same paintings and trophies. The glass domed roof will also be replaced – as it turned out it is just a cheap plastic replica from that earlier mentioned fire. 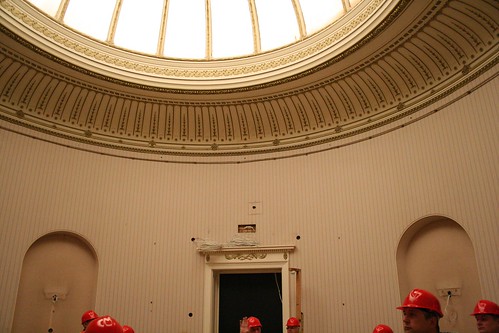 A large side room is known as the dance room, although its original function was the first ever “ops room”, with a big map and women wandering round with big sticks and little model planes. 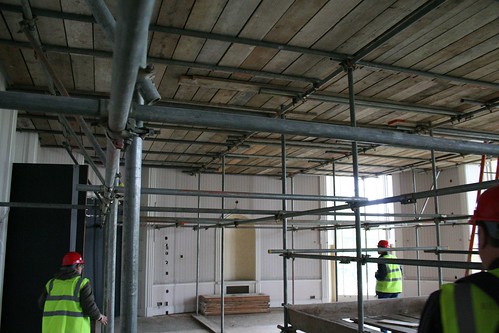 The ops room was eventually moved to a three-story bunker in the grounds. Sadly this was largely destroyed in the 1980s as a nuclear blast proof bunker was built – and that in turn is to be filled in. Various heritage people agree that there are better bunkers elsewhere, and while the cost of restoring it would have been huge, and I agree that other examples I have visited are better – I can’t help but think it would have added greatly to the museum as a place to visit.

Downstairs though, and into what was the servants workspace. This will also be the museum space, although more utilitarian, with classrooms, a cafe and services – and in the large round space, a temporary display area. 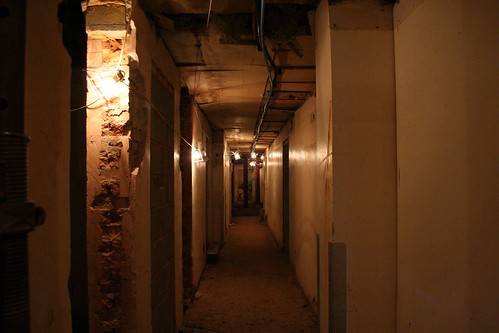 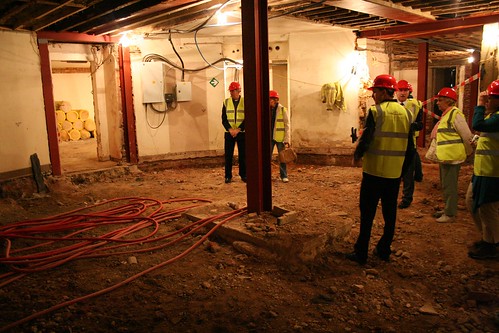 The current conversion of the building into flats is funding the building works for the museum, and they expect to finish late next year, with the museum opening in early 2013.

The museum though is still trying to raise money for its fit-out, and they still need a bit over £1 million for that.

You can read more about the charity handing the heritage here if you feel tempted to contribute to their fund raising efforts.

The full set of my photos in the gallery.