Depending on who you speak to, this site is possibly the oldest continuously used site of Christian worship in England, with recorded evidence dating back to Roman times, when soldiers were first starting to convert to the new faith.

The physical church that stands here now is rather newer, being built in the 1720s to replace a medieval version, which itself probably replaced a Saxon one that stood slightly further West. The site shunted sideways due to the local Soers ditch (clean water) overflowing and rotting the old wooden building.

When Churches were built in the 18th century, they would have a ground floor crypt, and the first floor is where the worship took place. This is exactly how the church remains today, but over time, the ground has risen upwards as buildings are built on top of each other, so the “first floor” is now the ground floor.

The four steps up to the church are all that remains of what was originally a ten-step high entrance. The rest is submerged. 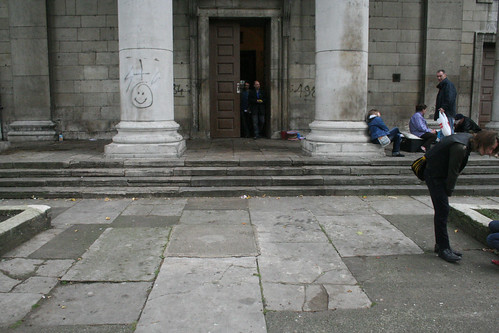 After a talk inside the church and the ritual handing over of bags to a custodian to lock away – it was round the back of the church to find the entrance to the crypt. 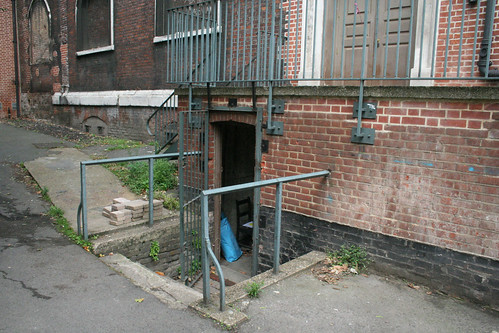 The first port of call was the spookily named Tomb of the Necromancer – presumed to be thus, although the evidence is circumstantial. Attribution aside, it is a very impressive tomb, and more so for being protected from the worst of Victorian pollution that would have reduced the decoration to formless blobs had it been in the churchyard. 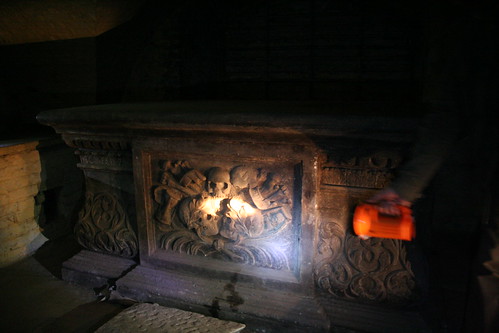 Much more exciting though was the moderately recent discovery of a huge vault in the centre of the crypt which was found by the current vicar wondering what a wall was doing where there shouldn’t have been on and blessing it with a few not so gentle taps from the ceremonial sledgehammer.

A slightly scary moment after he climbed in as the “floor” turned out to be surface dust sitting on stacks of coffins and the floor fell away as he disturbed it. The coffins it turns out were illegally cleared from the land by the London County Council and “dumped” in the vault and then sealed up. Eventually they want to give them a suitable reburial – partly as that is the right thing to do, but especially as by sheer fluke, the sealing of the vault has preserved an extremely rare 12th century floor which might have been lost and they want to open it up for visitors.

Told you it’s an old site! 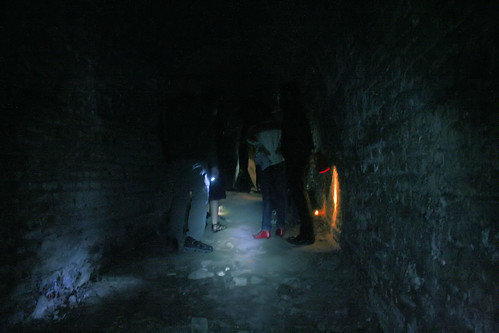 Another corridor and here glimmers of light come in through the remains of what would have once been great windows, but the outside soil has piled up to cover them to within a few inches.

The crypt is mainly used now for storage, so rather bizarrely there is an old piano rotting away down there. Oh, the candles were dotted around the place for atmospherics. The whole place actually has lighting, but for tours, they leave us largely in the dark save for torches and candles. 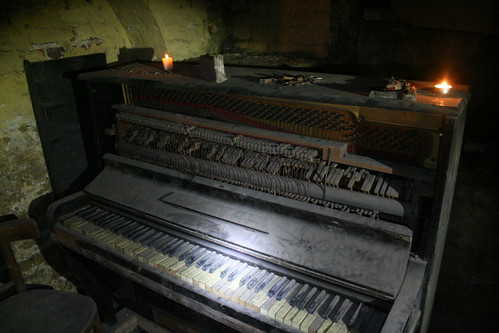 A few more vaults to see, and notice the way the weight of the lead coffins is crushing down on the lower burials, and a story about how undertakers would “bury” a wooden coffin filled with bricks. The lead lining having been sold – as was the body to surgeons. 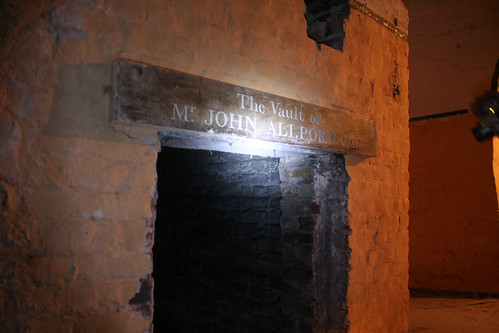 This only happened to the rich though – as only they could afford such a luxurious burial – so while the poor were dumped (albeit safely) in paupers graves, the rich ended up on a marble slab in front of a hundred students being cut open and gawped at. 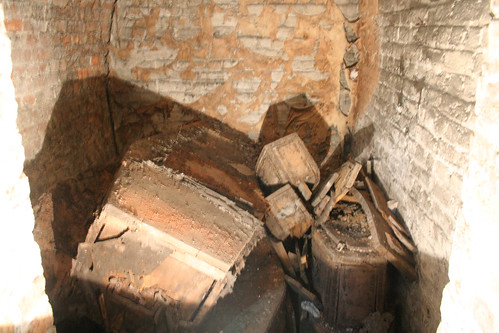 The whole tour took about two hours, including probably 30 minutes above ground for an introductory talk.

Oh, as we went to recover bags, I noticed the huge church bell and asked what it was doing in the church, and not up the steeple. It is an older bell from when the old bells were melted down and recast. For a demonstration, the bell was struck three times as we stood next to it. My ears have just about recovered.

As for the steeple, it is possible to go up there, and I shall try to arrange a visit, even if the rickety wooden ladder may set off my fear of heights.

The tours are free, and this one was organised as part of the Illumini 2010 series of events. At time of writing, there are a few places left for a visit on Wednesday 15th at 2:15pm. If you can’t get to go on a tour, the BBC did a news story and you can watch their 2 minute video here.

Also, fellow bloggers from The Londonist and The Londoneer were there, so expect a bit of commentary from them sometime.

Visiting crypts and similar is not exactly an uncommon event for me (if its underground, I want to see it) – previous blog posts that might be of interest: