A thatched roof for a megalithic stone

If you’re the sort of person to drive me around the countryside, you’ll also have to get used to conversations being interrupted by screams of stop the car, what was that back there?

Back there being what looked like a thatched shelter with a large stone inside it. Had I just seen a rather posh looking bus shelter with a pile of rubbish in the middle, or something actually interesting? 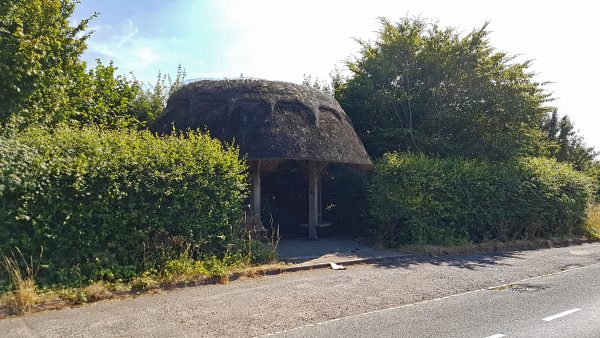 We were near Avebury, in the land of random lumps of stone, so it was plausible, but then again, to considerable embarrassment, it could be nothing.

Well, what have we here then? 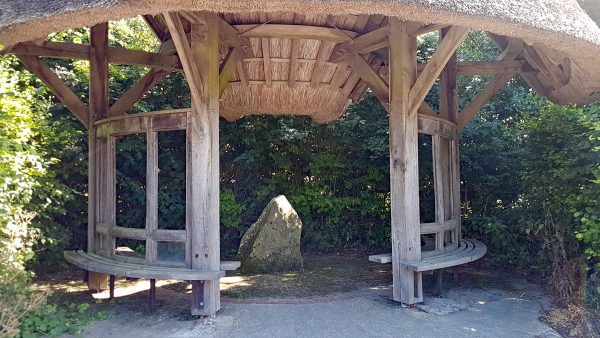 Even if you don’t rate the stone, the fact that there’s a large thatched-roof shelter over it suggests someone values the stone, so it should be of some importance.

In fact, the shelter was erected in 2001 as a village Millennium project, and designed by a local architect, Julian Taylor. Despite now being shaded from the sun by the thatched roof, and the hedge around it, there’s also a sundial embedded into the ground around it.

But this is no timepiece, but could be what’s known as a “cup marked stone”.

The stone was recently placed on this location, having been chosen from a number of samples being cleared from farmland nearby in the 1960s. It was placed on the spot to mark the location of a time-capsule that was buried underneath it. 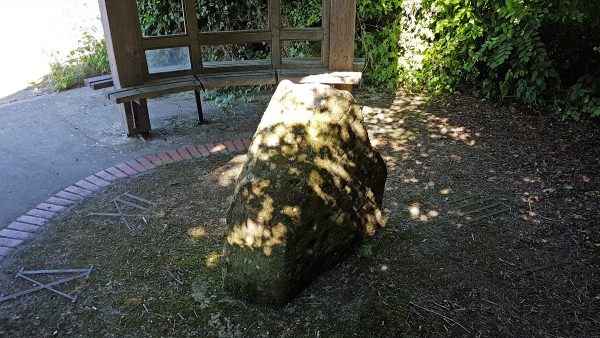 The circular holes in this vertical sarsen stone could be what are known as cup marks, but could frankly be any manner of holes that just happen to look reasonably correct.

Cup and ring marks are a form of prehistoric art found in many parts of Europe and the UK. They consist of a concave depression, no more than a few centimetres across, pecked into a rock surface and often surrounded by concentric circles also etched into the stone.

Their purpose is unknown although some may be connected with natural stone outcrops exploited by Neolithic peoples to make polished stone axes.

It almost doesn’t matter what they were used for. What matters is that a local community came together to build a very fine shelter for their own local stone. And nearly two decades later someone driving past was screamed at to stop so his travelling companion could go and have a look.