A talk by Tim Berners-Lee at the Science Museum

Many conferences are presented by a speaker who then has a moderately sized screen upon which the ubiquitous, and often quite boring PowerPoint slides are projected. To go to a cinema and watch a bunch of PowerPoint slides being projected onto what is one of the UK’s largest screens may sound almost like masochism, but the tiny figure, standing mote like in front of that gigantic screen was a man who was, quite rightly, introduced as having changed the world.

The speaker was Sir Tim Berners-Lee, the man who almost single handed created what most people today call “the internet”. Technically, the internet has been around for some 40 years, while Sir Tim’s innovation – the functionality that underpins websites is now 20 years old. 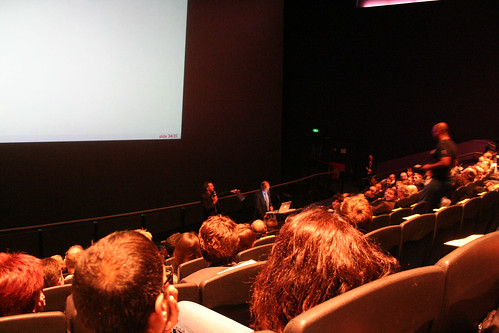 On the topic of anniversaries, it is also the Science Museum’s 100th anniversary – hence the talk last night.

His talk, which lasted about 40 minutes was a quick romp through the history of how he developed the idea for the HTML language that lead to the websites we see today, along with thoughts about the future – and then about 20 minutes of questions from the audience.

He said very little which was new, but it was the opportunity to be in the same room as the man who invented the World Wide Web that was just so incredibly exciting. Being somewhat geekish, this was probably as exciting to me as attending a music concert is for other people. You hear the same songs that you already own, but you are in proximity to the original singer. Yesterday, I heard much of what I already knew, but the words were uttered by the man who actually did them!

He is a very energetic speaker, and although almost glued to the spot by the fixed microphones, his animated way of speaking was utterly compelling.

I’m going to do a few postings over the next week or so inspired by some of the comments he made – especially as some of the “office politics” he had to deal with quite remarkably mirrored the same issues I had when I started developing the first ever Intranet for Vodafone Retail around a decade ago.

However, I’ll leave you with a comment he opened the talk with – and it related to his own childhood visits to the Science Museum. In his youth, big machines were boring and the only things of interest were boxes with buttons to press that then did things. However, the buttons were always tiny metal “pins” that were quite uncomfortable to keep pressing repeatedly. Very different to the large dayglo buttons museums tend to use today.

At last, he found out why the museums used those tiny painful buttons – it was a deliberate design idea to STOP kids pressing them all the time and subtly encourage them to move along to the next buttonless exhibit.