A Soviet Tank in South London

Lurking on a side street just off the Old Kent Road is a curious relic of two Cold Wars, one between mighty governments and one between a single man and the local council. 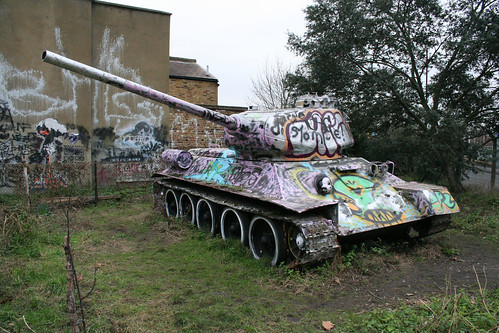 A small plot of land is owned by Russell Gray, and allegedly, he wanted permission to build a home on it. But the council disagreed.

In a fit of pique, he submitted a second planning application for the installation of a small tank on the site. The council, understandably presuming this to be a storage tank of some sort agreed.

And ever since, a former Soviet era T34 military tank has been parked on the land.

I can’t prove the story, as the Southwark council website planning applications only go as far back as 2005, and frankly, I wasn’t motivated to wander over to the HQ to trawl through the paper records. However, Southwark Council once told the Evening Standard that they can’t find any record of such a planning application being filed — which I put down to a mixture of lost paperwork and someone being very annoyed at the council.

I would have checked with the Land Registry, but they’ve deleted my account for some reason, and the system wouldn’t let me open a new account. Humpf! 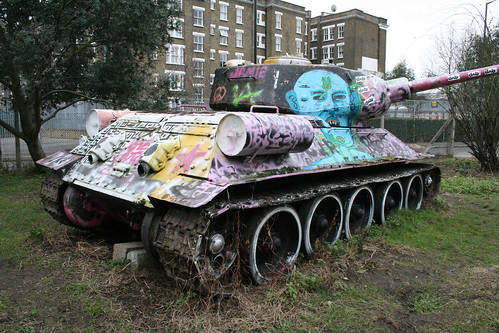 Legend has it that the tank turret points at Southwark Council head office, although as it is mobile and can be turned around, that seems to be more occasional whim than design. More accurately, the tank was used in the filming of Ian McKellen’s modern interpretation of Richard III, and more sadly was used during the 1968 put down of students in Czechoslovakia.

Today it is a popular target for graffiti artists and a symbol that a cold war is ongoing between one man and a council. The tank can be found by Mandela Way, much of which happens to be owned by The Queen, in the guise of the Duke of Lancaster. 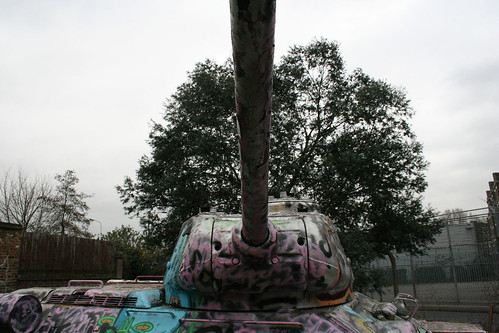