A small museum inside a military firing range

Published 6 May 2012 by Day trips from London, Essex

Lurking on the easternmost edge of the River Thames sits Foulness Island, a low lying marshy farmland that is also almost entirely controlled by the Ministry of Defence for weapons testing.

Rather improbably, sitting in the middle of this sealed off island are two villages, and a heritage museum.

Museums that can be visited are enjoyable, but one that is in the middle of an MoD firing range sounds more enjoyable – if only for the novelty of its location. 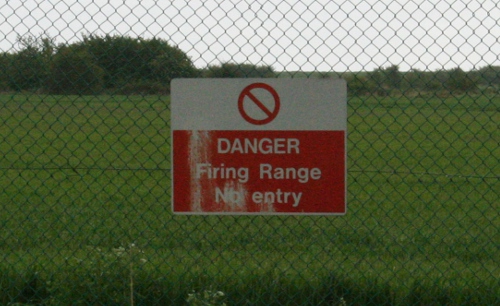 As a non-car driver, the easiest route for this Londoner was a train to Shoeburyness and then a walk to the island, and once through security, up to the village and museum. Access to the village is usually by invitation only, but on the first Sunday of the month during the summer, the museum is open for a few hours, and the general public are allowed in to have a look.

Shoeburyness is a town of limited facilities, so I caught an earlier than intended train so that I could theoretically get back at a more sensible hour – a decision which was to prove a very bad one indeed.

There is a twice-hourly bus that gets you 2/3rds of the way to the checkpoint, but it leaves 5 minutes before the twice-hourly train arrives. Someone at the railway and the bus firms really need to sort that out.

It is 3 miles from the train station to the security checkpoint and then a further 5 miles to the village.

Although the area is largely made up of 1960s housing, it’s not an unpleasant walk along semi-rural streets with occasionally vanishing pavements. A rather cute looking set of very well maintained cottages hinted at their ownership when the bus stop opposite said “MOD houses”

One of the junctions to be turned at was notable for having an ancient church. It was pouring with rain as I approached, but I was able to take a closer look later on the way back.

Eventually though – the end of the public road approached, and the security checkpoint that would let me pass through for another 5 miles to get to the museum. And five miles to get back.

According to the website, the museum opens from noon to 4pm, so arriving at the border by 11am seemed sensible to leave time to walk to the museum roughly 15-30 minutes after it opened.

Sadly, this is where well crafted plans fell to pieces. 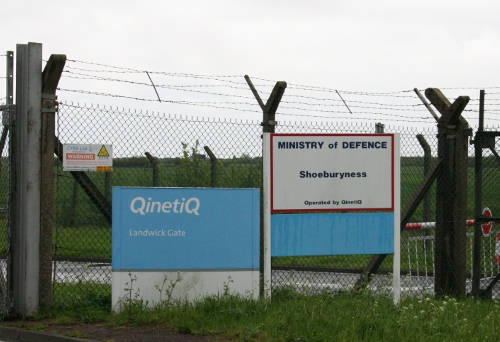 Popping into reception to request a pass to inside, I was greeted by a rather surly chap who seemed lacking the usual requisites for a receptionist and when I explained my desires bluntly told me that they wouldn’t let anyone in until noon. Yes, I explained, that’s when the museum opened, but it seemed that I was not allowed onto the Island until then either.

Then he questioned my mode of transport – and pointed out that if I walked, the museum would be closed by the time I arrived. Yes, it does close at 4pm, but he seemed adamant that a 5 mile walk would take at least 4 hours to complete.

It seems a worrying sign if today’s military (or more likely, their auxiliary support services) are walking along tarmac roads at a rate of just 1 mile per hour. Even my protestation that I can walk five miles in little over an hour was met with disdain.

A five mile walk to the village, a look around, a rest and then 5 miles back is NOT that onerous for the average person to complete.

Then he spied my camera bag and started berating me for wanting to be able to take photos, and for the photo I had already taken, from a public road of the entrance – an image that is on Google Street View anyway.

By now it was fairly clear that I could hang around the car park — in the rain — for an hour to be let in, but even if I did, from his demeanour, I had a very strong suspicion that I would be denied entry anyway.

It’s not so much the content of what he said, but the way he said it.

A cheerful greeting as I walked in, followed by an apology that I couldn’t go past for another hour, but I was welcome to wait inside somewhere if I wanted would have been so much better way to start a conversation.

Follow that with a discussion that I while am free to take photos at the museum, I must not do so on the road to the village would have delivered that disappointing, but perfectly acceptable message in a way that was much better than his attitude that I must be the stupidest person alive to think I could take photos of empty fields within MoD property.

I shall be dropping a note to Qinetiq who manage the site that they should amend their website to warn that the 12 O’Clock opening times do not apply to the museum, but the Island – and that walking there is probably forbidden.

The irritating fact is had I caught the later train, I would have arrived closer to noon, and might have been tempted to loiter around for 15 minutes to try the receptionist’s patience again. Oh well.

I wanted to visit a museum that was difficult to visit. I had no idea that it would prove impossible, and mainly due to a surly receptionist.