This tour — part of the Open House Weekend — ended up with a little bit of both.

Kings Cross is undergoing a massive refit at the moment, with the main train platforms area getting a St Pancras style spit and polish while the universally loathed green shed at the front will be demolished in favour of a modern ticket hall to the side of the building.

I have a purely gut instinct feel that ticket halls/waiting areas should be in front of train stations, not to the side, but that is offset by what I think will be a very nice waiting area when it is finished.

Meeting in the reception area opposite McDonald’s gave me a chance to snap a quick photo through the 1st-floor window of the fast-food chain for a slightly less common view of the station frontage, and also a walk around the back for some photos of the station from behind – a view that is rarely appreciated. 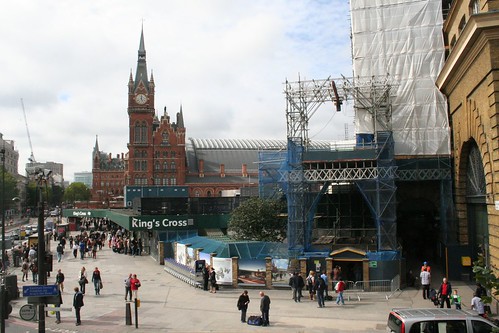 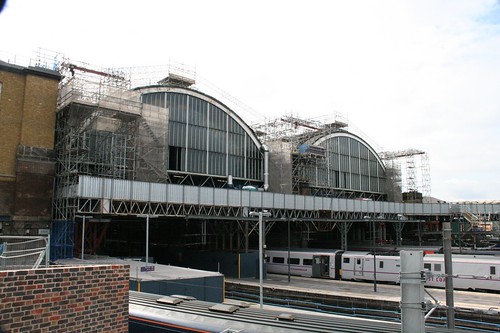 A receptionist who barely speaks English and wasn’t expecting tours to turn up is not a good start, but tour guides turned up swiftly enough to sort out the confusion.

The reception area, on the East side of the station, was originally a reception area – albeit for horse and carriages than people, and is now offices to replace the offices on the West side that were demolished. Eventually, the offices will move back to the West and the reception will be handed over to “commercial tenants” – aka, shops.

Squashed into a lift to go up a floor and the mezzanine level runs the whole length of the station with offices to the right, and a glass wall overlooking the platforms on the left.

Stopping by a large tile clad arch half way along, it turned out this is where the former “Harry Potter” footbridge (officially the Handyside Bridge) used to stand before being removed and put into storage – since sold to a heritage railway.

Anyone who watched the BBC documentary series about English Heritage may recall that the replacement footbridge was a very fraught issue with a lot of arguing over the lifts. What is more clever though, is that the lifts go down as well – to the underground services facilities so that in the future, cargo deliveries to the trains can arrive in the middle of the platform, not drive down the whole length of it. 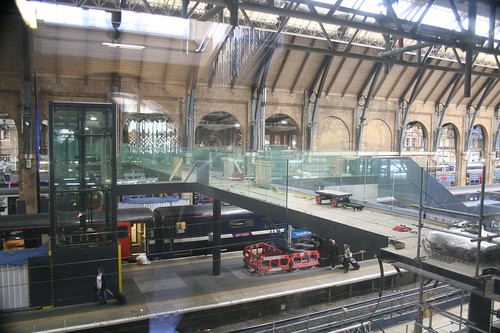 We were also looking down on works for Platform O.

To have the new platform called Platform 1, and shuffle all the others along one would have been simple for the station, but would have required a massive reprogramming of thousands of signals along the network – so they put in a “new” platform number instead.

As it happens, a major signalling upgrade is due to take place in a few years time, so Platform O will indeed be renamed as Platform 1 – eventually.

It was going to be called Platform X, but they decided that might offer the wrong sort of impression considering the area’s previous seedy reputation.

The spot we were in though is also the location for a grand staircase that takes you up a level to the posher offices – all of which have been refurbished — again English Heritage demanding all sorts of extra work to protect cornices and the like. 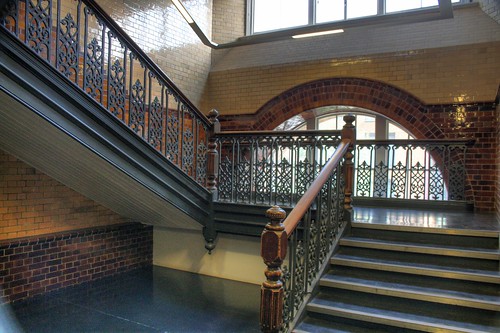 I see the point, but they are just fairly plain plasterwork, not that distinctive, and hidden by the air conditioning anyway.

Behind the scenes tour over and back down to the ground to look around the station that the public see – and for the first time, see the new roof. The chap taking us around was responsible for the roof, which has been covered in a gigantic duvet for years – and he noted that while lots of work was visible, his had remained hidden for years. 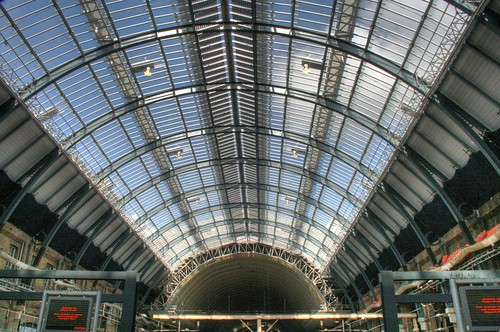 Now though, the work is becoming visible again, with clear glass replacing plastic and solar cells offering the circular decoration in the top apex. The glass isn’t self-cleaning though as that needs the glass to be at a steeper angle than allowed here, so expect to look up and see people with mops and buckets every so often.

A chance to peer through the plastic window that lets people see the work on the new ticket hall – which we were not allowed to go inside and look at. London Reconnections had a tour of the site a couple of months ago.

Interestingly, the mezzanine area with shops they expect to be slightly better quality than your average train station food supplies is freestanding, so in theory, could be removed at a later date and the sweeping roof won’t be affected.

It also turned out that some of the newer looking brickwork is recent as it filled in a hole left over from a WW2 bomb that had never really been repaired. It now houses ventilation shafts for the new Underground ticket hall.

Works on the new ticket hall should be completed shortly, and the facility open to paying passengers from the end of this year.

After that, work somewhat pauses until after the Olympics are out of the way – then they start to demolish the green shed. As you might suspect, it’s not as simple as just bulldoze the thing and cart it off, as the floor is not entirely watertight – so if you take off the roof of the shed, then water can run into the tube station below.

So all that has to be done as well – then the shed can be removed. Oh, and now that there isn’t a shed there, the glass frontage to the station has to be replaced with blast-proof glass. Just in case.

The local council also took the opportunity to squeeze in some demands for the external tube station entrances to be redesigned. They don’t like them, but couldn’t block their construction originally as they were part of the Channel Tunnel works affecting St Pancras.

The new concourse should open in March 2012.

Redevelopment around the back of the station though could take up to a decade longer – there is a very good exhibition about that in the German Gymnasium.