A Ripping Yarn of Silver and Salt

Published 4 April 2009 by Events and Tours

On what is now a fairly narrow side street in London lurks Goldsmith’s Hall, which belongs to one of London’s Livery Companies and is one of the city’s Great Halls. Not normally open to the public, the building does host a few exhibitions each year that are free for the public to visit, so this morning I wandered along to have a look at a silverware display focusing on that most common of table condiments – salt.

Going in, the display is laid out on the ground floor, so no chance of nipping up the very grand staircase, alas – but you do get a good look at it from the exhibition floor. 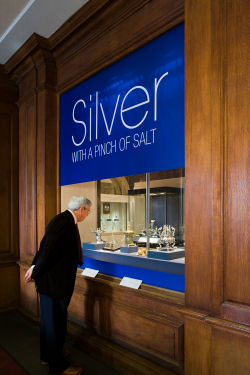 The display is a collection of “silver salts”, which were the early form of what we today call a “salt and pepper shaker”, along with quite a few display boards explaining the history and importance of salt in cooking and preservation.

We have to remember that prior to the invention of the icebox and later the electric refrigerator, drying food in salt was practically the only way to preserve fishes and meats for long term storage – and such was its importance that the trade in salt was controlled by a Livery Company. The Salters’ Company is ranked ninth of the Twelve Great Livery Companies of the City of London, and its first licence was granted in 1394 by King Richard II.

Salt was also used at the dining table, and many homes would have a small silver pot from which you could scatter salt onto your meal. A traveler to England in 1584 noted in his diary that “he must be a poor peasant indeed who does not possess a silt-gilt salt cellar,”

To be honest, the idea that almost everyone in Elizabethan England had silverware in their house sounds a bit difficult to believe. I suspect our traveler never ventured out of the grand homes of the rich.

Returning to modern times, the display in Goldsmith’s Hall starts with historic silver salt containers, which were generally open topped for the user who either took a pinch of salt or used a small spoon to scatter salt onto their food. The idea of a shaker such as we use today would wait until salt could be ground to a finer grade that could pass through the tiny holes in the shakers.

Initially, the Salts (as a silver salt container was known) tended to be quite large and elaborate, and in grand houses there might be several at a table, with the most elaborate at the head of the table – where the important person would sit “above the salt”. However, over time fashions changed and as family dining shrank or Gentlemen dined alone, the Salts became less ostentatious and smaller. 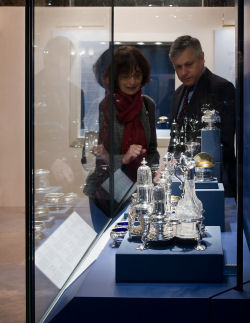 This is reflected in the displays as they move around from the ornate gilded salts to plainer designs which look almost modern in their styling.

The introduction of French dining in the mid 17th century also changed the table, as before the Salt was the only silver to be used, but the need for more sauce boats and side plates to serve French menus resulted in a lot more silver being used and that in turn reduced the fussy design of the Salts.

A few of the silver salts which caught my attention included on which had three compartments, for different flavours of salt. I suspect our modern use of bland generic “table salt” would cause horror to the gastronomes of those days! Another which I quite liked was inspired by the trend after the Battle of Trafalgar for all things nautical, and is a sea shell on a tortoise. Nice in its own right, I wondered how many would look at it and think of Terry Pratchett’s DiscWorld (albeit, minus the Elephants).

Although most households do use salt today, the idea of a special silver service has died out. However, grand silver Salts are still commissioned, either by rich customers or in the 1960s, but the new Universities who wanted to have a High Table after the fashion of the older Universities.

It is here that the second half of the display works, and shows off how modern silverware is designed and the results of the work. A couple which I quite liked was one for Brunel University which contains an atomic nucleus on the top, and one from the 1962 World Fair which reflected the prevalent idea of the time that technology would solve all our problems. I think we have learnt the folly of that way of thinking.

Another which was nice, but the story was nicer – was a piece which was two silver containers on a black block with an X etched into it. The X is a reminder that in silent monastic orders, if a Monk wanted the salt, being unable to call for it, he would mark an X on the table to indicate his request.

Today we have become somewhat wary of salt in our diets, but one of the display boards notes that the average person will still consume a staggering 6.95 tonnes of salt in their lifespan. Yikes!

There is probably about half an hour’s worth of displays to look at so it is worth a lunchtime visit if you are in the area or a trip on a Saturday. The display is only until 25th April though, so you need to hurry. It is open on Saturdays, but according to the invite card, it is closed on the 11th April, leaving Sat 18th and 25th – or Mon-Fri if local.

As a final note, there is a prize draw to win a Silver Salt – just drop in a business card or fill in a form in the Hall. 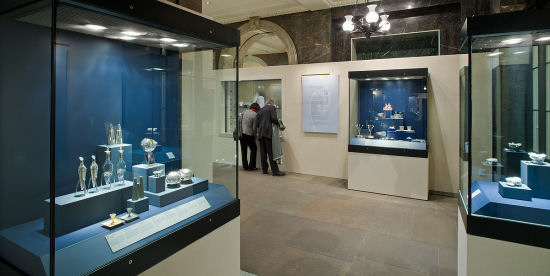 The prize comes with a lovely story as it recounts the time when pepper first started appearing on English tables. When peppercorns started arriving in the 16th century, they were a very expensive spice, and some of London’s riverside pubs introduced a rule that no one was allowed in with either shirt cuffs or pockets, lest they steal the precious peppercorns!

Oh, one final point – as I was chatting to the lady manning the desk I bent down and a ripping sound was heard as my trousers tore a hole in a most embarrassing location. Plans to wander over to Christies to peer at impossibly expensive antiques and offer longing sighs was cancelled in favour of very gingerly progressing back home to get changed. Opps.

Regular readers may recall previous visits to Goldsmith’s Hall for the Trial of the Pyx and last year’s stunning exhibition on Church Silver and Gold Plate.

Although generally not open to the public, Goldsmith’s Hall does host a few tours each year – the next one is in October.