Amongst the fluffy bunnies and clucking chickens that can be found at the Mudchute city farm sits a now silent visitor – a World War Two era anti-aircraft gun.

The farm occupies a plot of land taken over the Home Front where they based four anti-aircraft guns (Ack Ack Gun) to attempt to shoot German planes out of the sky as they attacked the valuable docklands of East London. 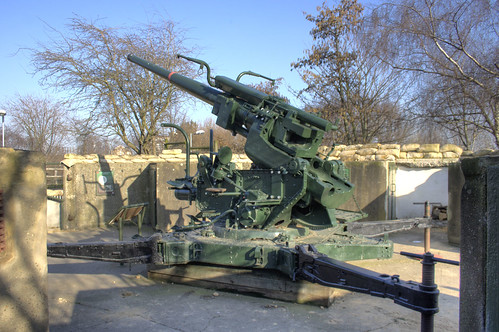 Last year, following a Heritage Lottery Fund grant, they were able to restore one of the guns and the surrounding concrete bunker — which had served a post-war function as somewhere to keep the large animals overnight.

The gun itself is one of the types most commonly used around London – and could fire 3.7 inch shells.

Of all the gun sites across London, this is also one of the more historic ones to restore. On the 8th September 1940, the nearby command post was destroyed by landlines being dropped from German planes, so the commander of the battery, Captain W.J.S. Fletcher RA went around the four gun sites and encouraged his young crews to carry on firing the guns manually.

He was awarded the Military Cross for his actions that night — the only one awarded for action on British soil, and the entire unit was commended for bravery. 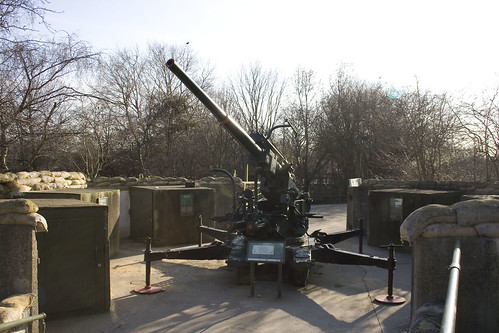 Stacked around the restored gun are the original concrete ammo storage boxes and some suitably decorative sandbags line the walls. A number of display boards also go into the history of the site.

Although the gun obviously cannot fire anymore, it still rotates, and when I visited parents seemed to delight in putting their kids on top to spin the handles, or occasionally join in themselves.

Yes, you can aim the gun at the Canary Wharf skyscrapers if you so wish. 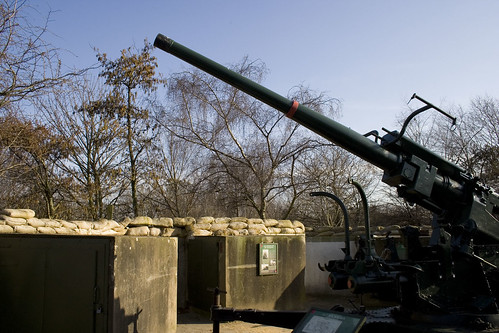 Oh, and concrete bunkers for the other three guns? Two remain, and are now the pigsty!

The farm commissioned this film about wartime life on the Isle of Dog.