A rare oasis of calm in Camden Town

Camden town, that bustling heart of youth and arts has a seemingly rather overlooked oasis of peace and calm – sitting right next to the huge Sainsburys.

Built in 1881, the church of St Michael’s Camden Town is frankly, rather showing its age now, with an interior that is shabby, but in a curiously appealing manner, and a frontage onto the street that is a solid wall of brick and not at all inviting. 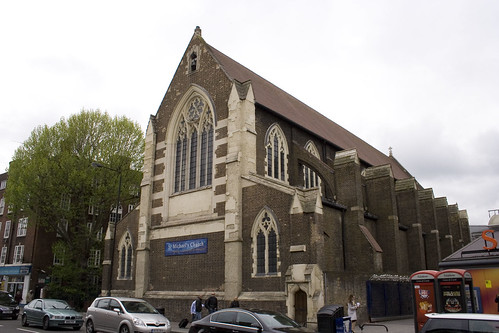 Externally it is of brick and stone, in a single aisled compartment, with flying buttresses over the aisles. Internally it is of stone, with well-proportioned aisle arcades and clerestory windows.

Yet, this building should be an ideal place for people seeking a break from the fuss and panic of the streets outside. And indeed, unlike many churches, this one is open every single afternoon for people to come in and have a moments rest.

That is itself a fairly recent change, introduced by the new Fr Nicholas Wheeler, who joined in 1996 — in fact the church had been occupied by squatter for the previous 12 years. Although they have long gone, the church still maintains close links with homeless charities. 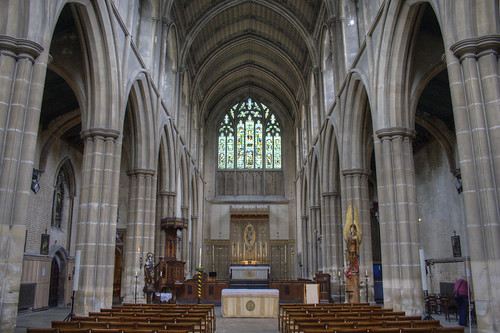 The church might stand out a bit more though if the planned clock tower had been built. But for some reason — probably financial — it never got its chance to soar over Camden’s buildings.

If you do go inside, this is a building that has a lack of decoration, but it is the dereliction that rewards inspection. The exposed brickwork where plaster has fallen away. The rather cheap looking Stations of the Cross dotted around the walls, more student art work than a grand church. The flooring, which might actually be quite good, but long since worn and tired.

But oh, do look up as well — that’s rather a fine ceiling, and the details in the painted bands are delightful. Although in need of restoration in places, which is a shame as it was only restored in 2007. 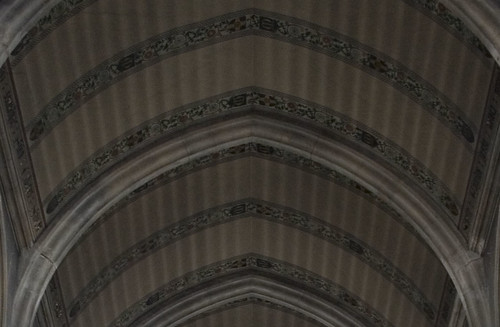 The few stained glass windows on the lower level — designed by THE Augustus Welby Pugin. Even the railway romantic, Betjeman was rather fond of this church. 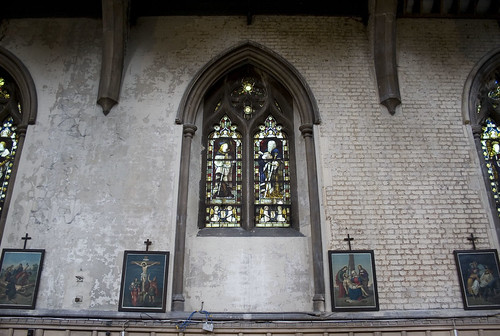 Overall, the building is worn out, tired and in need of sympathetic restoration. But as an actor can age from a pristine youth into a deeply creviced character face, so this church has aged and shows it. But in a good way.

The church is Grade II* listed though – so the restoration has to be sympathetic. Which will be nice, if they ever raise enough money for it.