A quick look at St George in the East

Published 30 November 2010 by By Ian Mansfield Events and Tours

Next to the busy Highway linking The Tower of London to Docklands sits an impressive Church, the Hawksmoor designed St George in the East. Despite its slightly forbidding exterior, it conceals a very real surprise.

Built between 1714 to 1729, the centre of the church was destroyed by a direct hit from a German bomb, leaving just the three distinctive towers and the outer walls. In 1964 a modern church was constructed inside the existing walls, and a new flat built under each corner tower. 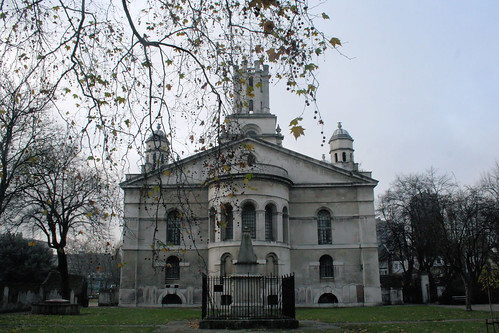 Going in through the original stone archway, there is a courtyard, with a huge glass window that rather nicely reflects the old church tower behind you while still letting you see the modern interior. Apart from a rather nice mosaic at the altar, the interior is however, almost barren in its decoration – which is coincidentally not that different to the decorative concepts used when it was first built.

In addition to its more recent unexpected reconstruction, the church is notable due to the small park that sits behind it – which was one of the first graveyards in London to be converted into a public park.

The park came about after the rector at the Church in the 1870s, the Rev. Harry Jones wanted to provide some relief from the densely built up surroundings for the people of the parish. His efforts to persuade the Church authorities, and the efforts of the Vestry in dealing with the secular authorities made it possible for the churchyard to be opened as a public garden in January 1877.

Originally formed from land at the eastern end of the churchyard and the whole of the adjacent Wesleyan Chapel burial ground, the Gardens were extended in 1886 to include the remainder of the Church’s graveyard. Two more expansions took place in the 1980s and 2002.

Although the rear of the church has a public garden that is not too unpleasant to look at, the front is decidedly less decorous, and I feel sorry for the spectre of the person buried in an impressive stone memorial by the front door, as his current neighbours are probably not what he expected. 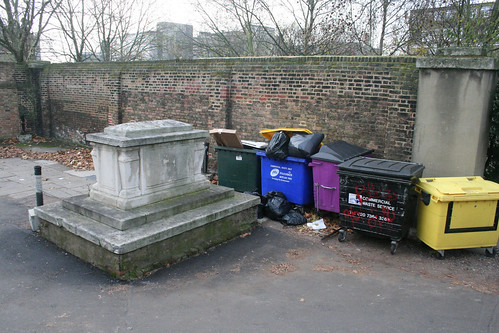 A very detailed history of the church is on their website.