A new camera at last

About 10 years ago I bought a brand new camera. Quite a good one for the time, and although it had wider usage, the motivation was a specific event that I wanted to photograph with something decent.

As it happened, the camera managed to ignore my commands and every photo was very slightly off focus. Not enough to notice unless you printed the photo large, but annoying.

Since then though, it has been a trusty companion on many site visits, but a couple of years ago old age really started to show.

The camera maintenance people said that it was on its last legs and they were struggling to keep the sensor clean. A few site visits for this blog were struck by panic as the camera mechanism jammed.

A visit to a Crossrail site had me basically disassembling the entire thing to try and force a reset and get it working again. Not easy when wearing protective gloves and trying to keep dirt out of the lenses.

A new camera was increasingly necessary, but the wallet was lacking funds.

Thanks to the generosity of many readers a few months back to sort out a fiscal emergency, and some recent wage packets — my first significant purchase has been a new camera.

I felt that as I urgently needed a camera, and that it would assist the blog, whose readers had assisted me recently — that the camera should be the first thing in my armoury of old stuff that should get an upgrade.

The new camera — a Canon EOS 70D — has a resolution that is more than double what I was getting with my old camera. I stuck to Canon due to the lens compatibility. 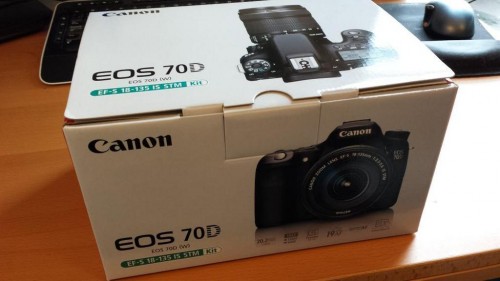 A few years ago I had some cash to spend on either a new camera, or a new lens, and bought a new lens — a really decent zoom with optical stabiliser, which I have never regretted buying. That lens has added significantly to the ability to take good photos from a distance.

The wide angle lens could also do with being replaced, as the difference in optics between the two is clear to see, but that will have to wait for some more wage packets.

So I finally have a camera that wont jam on me at inopportune times — hopefully.

Its technical picture quality is higher, which may help when selling photos. An agency once wanted a load of my photos, only to complain in the strongest terms about my use of an old camera to take them and how I had let the agency down. Wasn’t my fault that they pitched a campaign to their client based entirely on my photos, without checking with me first!

Which is a bit of an oddity, as technical quality is no longer the key issue for many media companies. It matters, and better quality is good, but if you are the only person to capture an event on a smartphone, then that’s all there is to use.

It’s less the technical quality, then the unique moment being captured in digital format. A smartphone photo is perfectly acceptable to media these days, if there’s no alternative.

I’ve been quite lucky to get to unique places, but have wished for a better technical quality from my photos, as a really good camera can do more when in tunnels, or on some sites I visit. It does make a difference, and I do sometimes suffer lens envy when I see people pulling out really good kit from their bags on site visits.

However, the greatest gain I am likely to get from the new camera is speed. The old one took 3 photos per second, and the memory card write speed was quite slow so that after about 4 seconds, the camera would stop as its internal memory was full.

So often I have taken photos of fast moving events, only to get home and realise that a faster camera would have captured an event a fraction of a second later — and turned an average photo into something excellent.

Not to mention photographing fast moving things, then having to pause as the camera memory caught up with me, so I end up missing it entirely.

A sharp learning curve now as I get to grips with the menu functions and locate all the stuff I like to use, then out and about taking hopefully better photos than before.

The past couple of months of commuting 2.5 hours per day has finally paid off — in the form of a new camera.