For the next few weeks, we mere mortals are being permitted to enter the hallowed halls of medical heritage as the Royal College of Ophthalmologists holds its first ever open days.

More accurately, open hours – as the museum is open for just two hours on Tuesday and Thursday, and only until the end of this month. 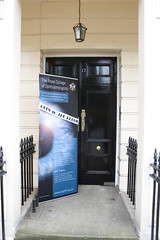 Situated in a row of imposing Regency buildings overlooking Regents Park (map link), there is just a small black door, helpfully indicated by a large poster inviting people inside. Sign in and you are taken upstairs to the museum, and some side rooms. A couple of tour guides are on hand, and maybe it is normal, or maybe I turned up when it was quiet, but I got a personalised tour of the small museum and display boards.

This is certainly one of those buildings which looks imposing from outside, and has imposing ceilings, a modestly grand staircase and grand portraits lining the walls, but the small rooms being it down to a more human scale.

I have quite a phobia about anything getting near my eyes — much to the annoyance of nurses when trying to apply eye drops a few years ago — so a visit to a museum devoted to the art of sticking sharp implements into someone’s eyeball was likely to prove a challenge.

Indeed, one room with a repeating video of an eye operation was deliberately ignored. So deliberately  ignored that I also avoided the mirror reflecting the television image next door. I also had to decline the offer of trying out the eye surgery simulator.

Phobias can be a right nuisance at times!

One posh room has some display boards with a brief bit of history about cataract surgery and its predecessor, couching, which was the process of knocking the lens down out of the way but not removed.

The main part of the museum though is next door in the Oxford Room, which has a few cabinets of historic medical torture instruments. Do look out for the lead face mask which was probably worn during early x-rays, and the large collections of student training eye balls.

Lack of decent lighting in the past lead to some curious developments, including one picture of a shoulder harness worn by the patient with two candles on each shoulder to offer enough light for the doctor to work with.

Sadly, no photography was allowed, but they sell a few postcards as mementoes. 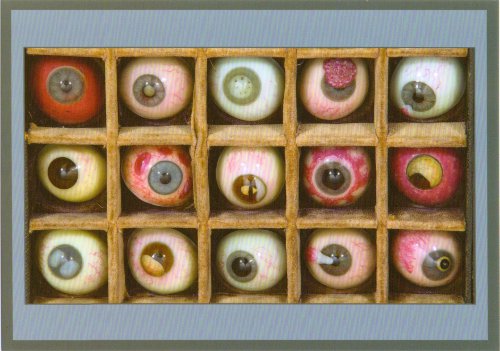 It’s a small, but for anyone interested in medical history, fascinating museum.

The building will be open from 2 to 4pm on Tuesdays and Thursdays from 31 July to 30 August inclusive. Entry is free of charge.