A mono railway proposed back in 1880

In September 1880, news of an invention reached the press, of a mono-railway that could be built quickly and cheaply.

The system of elevated transit-ways, devised by Mr. J.K. Collett, of Cardiff, is considered by him applicable to proivide a cheap kind of railway, and one that could be very quickly constructed, for use in war time, or in countries which cannot bear the cost of an ordinary railroad.

His plan is to erect tripods of timber, iron, or other suitable material, supporting a horizontal beam carrying a single rail.

The trains would be suspended from carrying-wheels overhead, which would run securely along this line. The weight of a carriage suspended below would be at 2 tons, and capable of carrying 12 passengers. 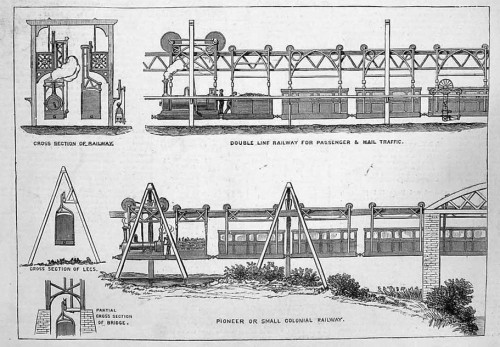 A locomotive engine of 20-horse power has also been designed by the inventor, which could draw the train along at around 20 miles per hour. A stationary winding engine pulling trains by rope was also an option.

The article notes that the rope pully method would be suitable in urban areas.

Some 130 years later, and the monorail as a significant rail service is still an idea whose time is yet to come.