A modernist marvel – the staircase of Bevin Court

Hidden around a corner on a side street not far from Kings Cross can be found one of Britain’s great post-war modernist buildings — and an amazing staircase.

Staircases are a curious thing, they permit access between floors and have to be convenient to use, and safe to use, but are either bland to the point of pointlessness, or tours de force of architectural design. 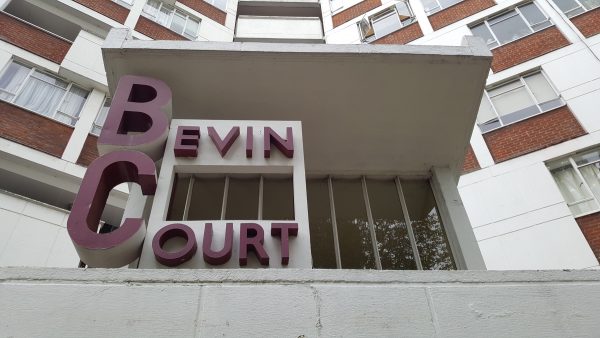 The building first though. When Finsbury was all fields, a large reservoir was constructed nearby to pipe water to the city, and the fields ended up looking like a wooden oil refinery, with pipes running along the ground to pipe expensive clean water to the mercantile classes.

When the locals started stealing the water by drilling holes in the wooden pipes, the water firm replaced them with iron and buried them underground. Suddenly, all was fields again, and ripe for housing developments.

If you’ve ever pondered the curious road layout in the area, it’s because the roads mark where the iron pipes were laid, and thus no housing on top.

The homes turned out to be less desirable to the middle-classes and were soon chopped up into high density crammed little flats. The area was badly damaged during WW2, and it was Finsbury Council that took on the task of building replacement housing.

That brings us to the socialist architect, Berthold Lubetkin who had politics in tune with the council and is largely credited with bringing modernist design to Britain after he left Russia.

He was slightly lucky in that some of his earlier commissions were for zoos, because animals don’t complain, and the humans marvelled at what he built for the penguins at London Zoo, so he soon started building homes for humans.

A plot of land was available, and the council asked him to provide social housing for people displaced by the war. His original plan, for three blocks, a community centre and school was soon scaled back.

Away went the facilities, and even then the three blocks were too expensive.

Then he came up with the idea of joining the three blocks in a Y shape, with a single staircase and lifts and facilities. What we have today is the result in part of austerity, and thanks to that cost-saving, a single grand staircase where there might have been three average sets.

A circular portal, with triangular landings penetrating all the way up to the sixth floor and standing free from the floors to offer a penetrating view all the way to the top, or down to the bottom. 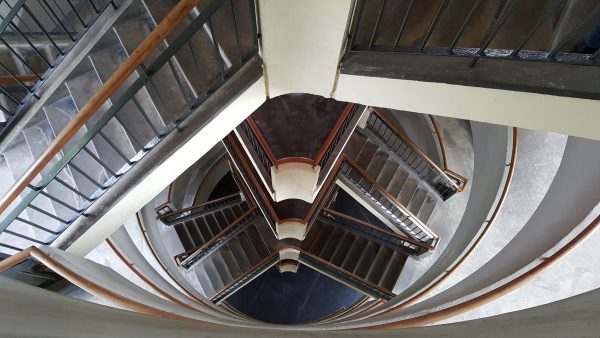 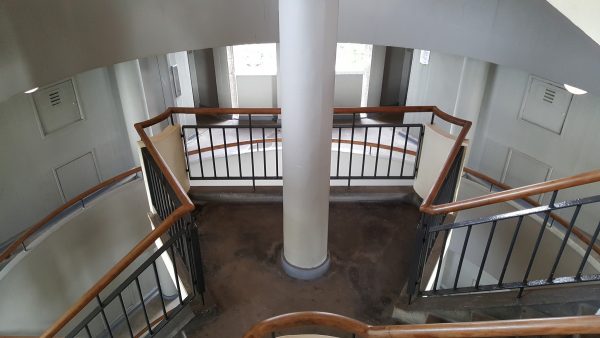 The floors are not glazed but kept open to the elements, as fresh air was seen to be a very important addition to the lives of those who had previously lived in polluted slums. 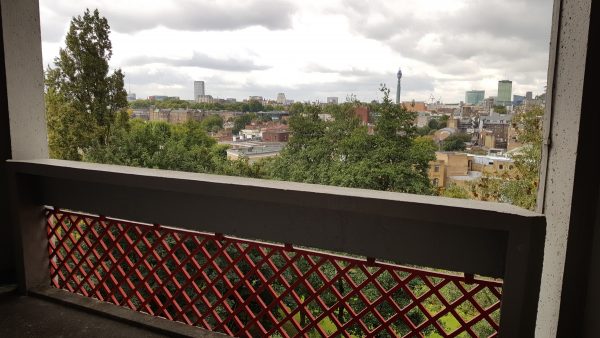 Opened eventually in 1954, for the new tenants, this was luxury. A personal kitchen and bathroom where before they shared, and before the trees grew-up, vistas across much of London.

Sadly, humans tend to be less noble than buildings, and soon it was despoiled, so the formerly open front to the building was sealed off with doors, which remain today. A mural in the front foyer was slowly decaying but has been recently restored, and a local community has emerged that values the building for its architectural merits. 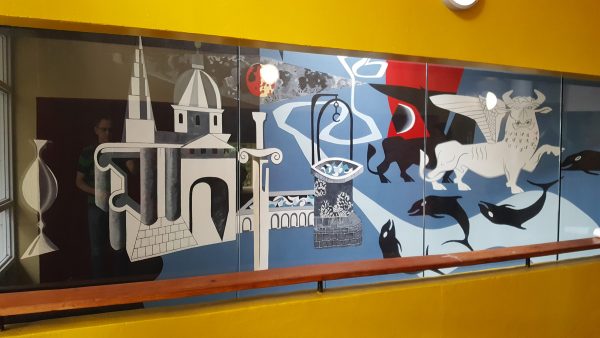 The red underpainting of the stairs is a recent restoration. It was red originally, and then for many years a rather bland white, but now gloriously restored. 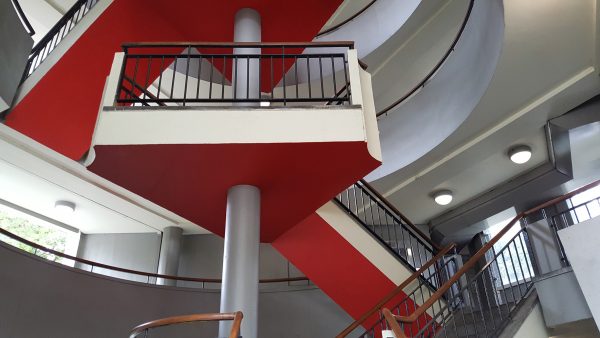 As a condition of the Heritage Lottery contribution to the restoration of the mural and stairs, the public should be allowed to occasionally go past the locked doors and get a chance to see this modernist marvel. 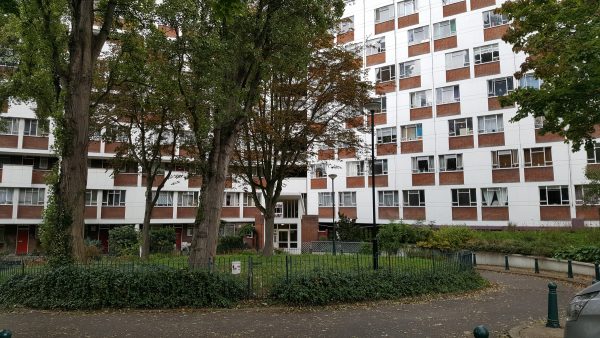 The name of the building has a curious history. It was named Bevin Court after the recently deceased Labour politician Ernest Bevin, and a bronze bust was installed in the foyer. At some point in the 1970s/80s it vanished, presumed stolen and melted down.

A 3D-printed version was recently created from the bust that inspired the original, and that now sits back in pride of place, but if anyone steals it, they’re in for a disappointment, as it’s mostly plastic, covered in a thin bronze skin. 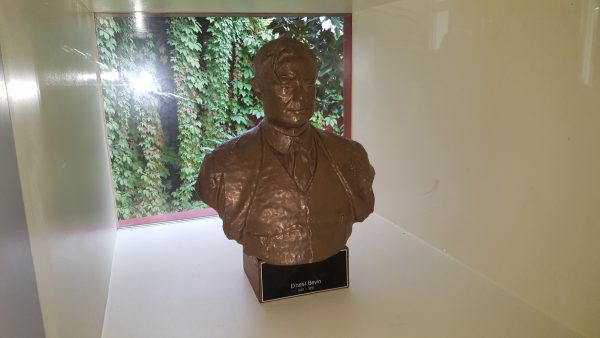 However, the building was originally going to be named after a very famous former resident of the area…

By the early 1950s though, even Finsbury Council balked at the idea of naming the building after a leading light in the Soviet cold-war enemy, so it was named Bevin Court.

It is claimed that the architect, Lubetkin in a fit of pique buried his planned memorial to Lenin in the foundations under the stairs.

So, you can either say Lenin is still at the heart of the building, or you are stomping on his head every time you use the stairs.

I leave it to you to decide which.