A length of concrete wall running alongside the future Elizabeth line tracks in East London is to be covered in a mile-long work of art.

The old North London Line which used to run between Canning Town to North Woolwich was closed in 2006 but has now been rebuilt for the Elizabeth line down to Abbey Wood.

The railway runs between two roads, and used to be protected by nothing more substantial than an old wire fence. Today, a massive concrete wall lines the railway buffering the noise a little for the people who live facing it.

It has however a long unremarkable concrete wall with no decorative features. 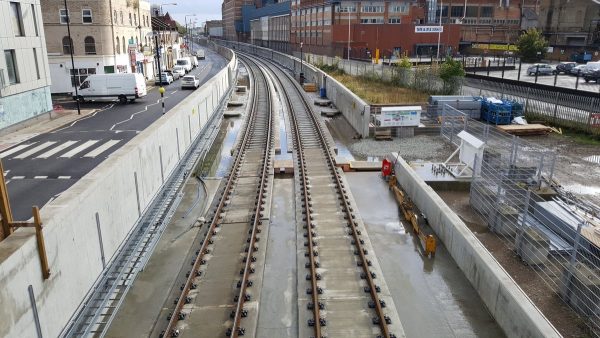 Now, three artists have been shortlisted to work with local people to deliver concepts for the boundary wall artwork, which will run through Custom House, Silvertown and North Woolwich.

The artists – Sonia Boyce, Oscar Murillo and Amalia Pica – now have three months to engage with the local community before presenting their proposals to a Steering Group that includes community representatives from the local area and councillors from the London Borough of Newham.

At more than a mile long, it is believed that the artwork will be one of the longest ever commissioned in the UK.