A look inside the modern St Barnabas church in Dulwich

On the 7th December 1992, a Victorian gothic church on top of a hill in Dulwich burnt down, following an arson attack.

Just under four years later, a modern replacement rose up once again with a uniquely distinctive look and spire to dominate the landscape.

This is St Barnabas Dulwich, and is one of the better modern churches I have visited. 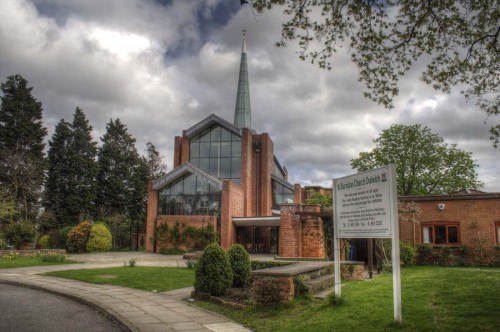 I have been past a few times, but the doors have always been closed, but on my last walk past, I noticed musicians entering the building, and quietly followed some inside to have a look around, and take some photos.

Modern churches rarely work for me. The bible is an old document with old languages and florid descriptions, and the religion it promotes seems to my mind to need old heavy ornate buildings that whisper of fantasy as strongly as the book itself.

Modern churches seem oddly wrong for religion. I half expect God to turn up in a Next suit and talk in management jargon rather than in gothic incantations.

So, while the architecture feels to have diluted the magic of the religion, I still think this is an exceptionally wonderful building, and is a good replacement for the smouldering Victorian pile that stood in its place. 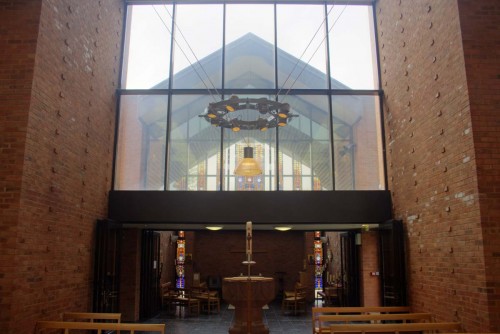 It is a church that can be largely defined in three colours, the grey steel of the roof and spire, the orange/red brickwork and the dominant shade of blue used in the modern stained glass windows.

Here, the stained glass is less about telling a story to the illiterate and more used as punctuation marks around the building. Suitable strips of coloured light to separate walls and add a lighter touch to the otherwise dominant brick aesthetic.

Of course, there is one huge glass wall covered in coloured decoration, at the rear of the church in a smaller private chapel. 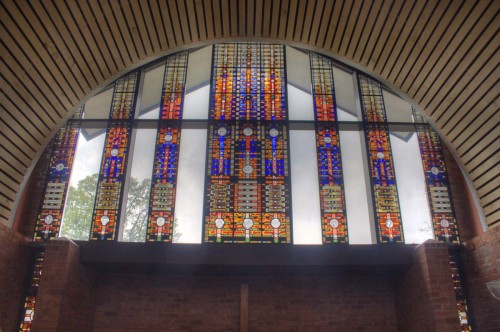 It is however the main church that causes the eyes to ascend skywards, as the huge wooden double arched ceiling is a wonderous sight to behold. Slightly ruined by the cheap looking lighting, but nothings ever perfect. 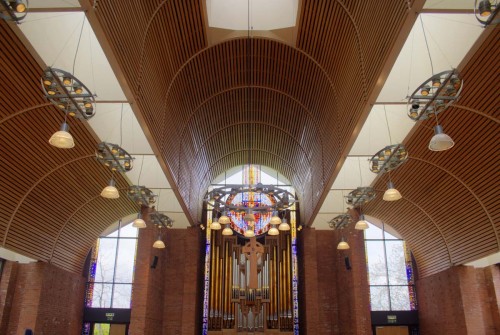 I can’t quite see myself sitting down here for a quiet period of relaxing, as it feels, just too municipal, too much like a community hall, but I think what is here is an architecturally wonderful building.

However, what really makes the building stand out is seen from the outside, and that it the spire. Here, the often solid markers in the landscape has been replaced with a hollow core built up of a metal mesh, and simply capped at the top.

The transparency of the spire is such a shocking contrast to what is usually to be expected, and it was that, when seen from the distance that originally brought me to the church.

The one thing the the new spire didn’t replicate though, sadly was the ability to go to the top of the old tower for reputedly amazing views of the area. 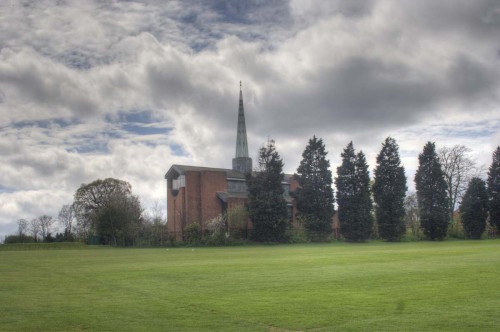 The photo above is the church as it is today from a nearby road, and this is what it looked like 20 years ago.