They were set up originally in Deptford as that is where the docks were based, and had a long since demolished house there and in Rotherhithe – but their first major property was in the City in Water Lane next to the still existing Custom House.

Built in 1660, the building was promptly burnt down in 1666. Rebuilt, it burnt down again in 1714. Finally, in the 1790s, they moved from a now crumbling building to a new property next to the Tower of London – and are still there today. 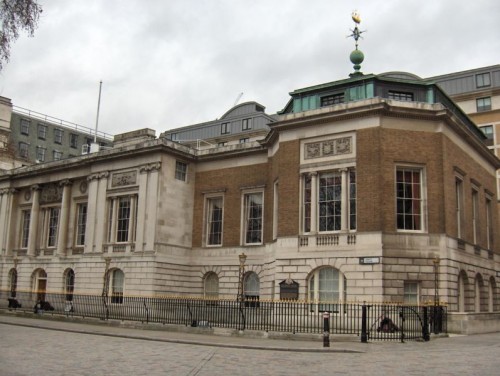 Unfortunately, the building you see today is modern. Well, apart from the outside front wall, as that was about all that survived a direct hit from a German incendiary bomb in December 1940.

Within, although largely restored, some of the art work is also modern replicas. They stored the originals in the Tower of London at the start of the war, only to remove them due to damage from dampness on the 28th December 1940. They dried out very quickly though, as that was the same night that the German bomb hit the building and burnt them all to a crisp.

The rest of their less important art had been shipped elsewhere. A truck carrying their original 17th century mirrors crashed, smashing all but one of them.

I told you they weren’t a lucky organisation.

Fortunately, the post-war restoration was rather good and you really wouldn’t know that this isn’t a well maintained Georgian era building unless you were told. And told we were on one of the few public tours available to see inside the building.

A wide waiting hall, with besuited concierge opening doors for visitors is lined with a number of impressive scale models of famous ships and some relics from the older buildings.  Coats left in the hall as the cloakroom was full of cloaks belonging to a group having lunch upstairs.

That group decided to leave, slowly and loudly as our guide started talking about the history of Trinity House, and in the end he admitted defeat and trotted us up the staircase to carry on in peace. And oh, do caress the staircase banister – such smoothness is almost sensual!

At the top of the landing is a huge portrait of the members of the Great Court of Trinity House. The painting is 2 feet wider than originally designed, as Captain Joseph Huddart was abroad at the time it was painted, and insisted on being added in later.

He is also the only one not wearing a wig – which is thought to either be a slight by the painter, or possibly a protest against the wig powder tax that was introduced a few years after the painting had been originally finished. 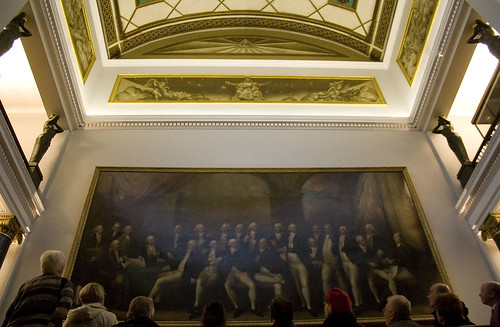 Off to one side though are the two main function rooms, one a modestly recent architectural addition to the building, but in the same “city livery hall” style, and with some impressive views directly over to the Tower of London. The stained glass windows incorporate pieces recovered from Trinity Alms Houses and their former main offices and restored after the war.

This is in fact the library, but the books are concealed behind wooden panels when the room is in use for events, as had been just as we arrived. Staff were still clearing away the lunch. 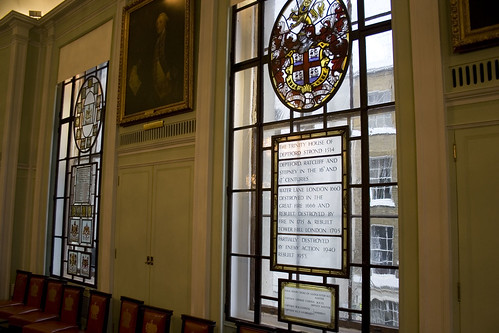 Further down the hall though, the grandest room is the Court Room, with a faithful reproduction of the original painted ceiling.

The original design was done by the future famous artist, William Holman Hunt, who reportedly complained about headaches from painting on his back on high scaffolds. The replica, by Glynn Jones was more sensibly done on canvas that was later glued to the ceiling. No headaches this time.

This is where the Great Court that governs Trinity House has its meetings. It also contains the UK’s second largest single-loom carpet, after one in Windsor Castle. 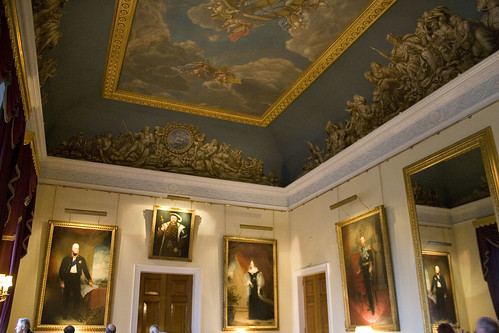 A lot of the restoration of the building is based on a series of photos taken in 1919 for publication in the Country Life magazine, which is a rare stroke of fortune for the ill-fated building.

Several smaller rooms are more intimate and lined as such rooms usually are with portraits of navel personages and ships, and various relics.

It seems there is a superstition amongst sailors of not be represented while climbing the rigging of ships. So one painting of an English ship just after it had been captured by the Dutch shows monkeys up on the rigging instead. I’m not entirely sure if that was an insult to the Dutch or homage to the superstition.

The tour finished with tea and biscuits in here.

Considering how badly damaged the building was following the war, it has been remarkably well restored, and while the functional offices long since moved to Harwich, London remains the spiritual home of the organisation.

Although it is sometimes open to wander around during Open House Weekend, sadly, guided tours are exceptionally difficult to book, and I only just about got the last slot for this year. I’ll flag up the tours next year when booking starts – and at least you’ll be visiting on them during their 500th anniversary. 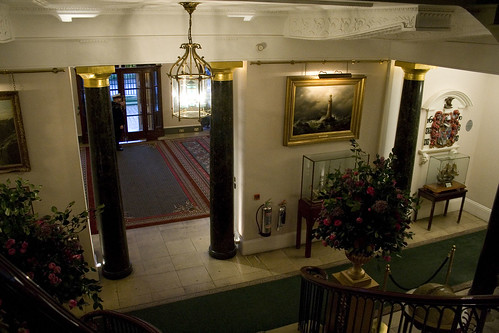 Another way to get inside if you want is to hire one of the rooms for a function – they are terrifically keen to do that.

You can even hire the staircase. I guess it’s good for TV shows rather than somewhere you would hold a dinner event.