While much of the focus on London Bridge’s redevelopment sticks to the station itself, one of the most complex parts of the upgrade is taking place a mile away, in Bermondsey. 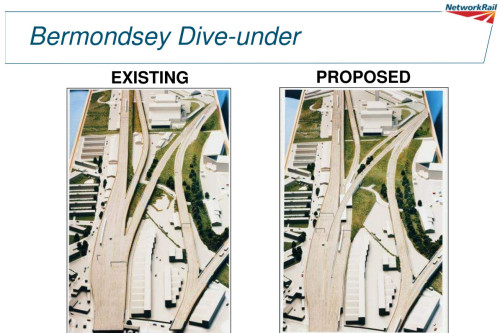 The works taking place are part of the Thameslink project and will remove one of the nastiest rail traffic bottlenecks in the London Bridge area.

At the moment, Thameslink trains have to cross two sets of east-west tracks to get onto the correct set of north-south tracks, and that causes delays as trains have to leave gaps in the schedule to allow for such movements, and delays in trains arriving at the correct place on time can be magnified by the tight schedule they run to, causing a cascade of delays down the line.

A lot of the new platform alignment rebuilding work at London Bridge will remove one of the two crossover points, but it is down at Bermondsey where some of the most complex works are being carried out, with a complete rebuilding of two railway viaducts, and the installation of a new fly-under to help trains get past each other without being held up by crossing traffic.

A good way to show this is to compare two charts showing Thamelink’s green route across 150 years of haphazard track development, and the impact the dive-under will have on it. 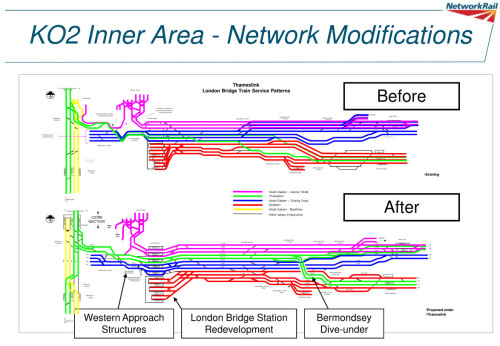 To facilitate such a huge change, a large chunk of the railway has to be rebuilt at the already complicated set of junctions next to South Bermondsey station, and it is those changes that have tied into the station works at London Bridge to curtail some of the train routes through the core of the network.

The first phase took place last year, which was the widening of the existing railway with a new concrete ramp which will let trains heading out towards Greenwich dip down and back up under the new Thameslink track.

One of the more intriguing works was to strengthen an old three arch metal bridge, by burying it. The old bridge had to be replaced, and rather than cut out all three arches, they encased two of them in lightweight concrete foam, and then installed a new concrete box in the third gap. 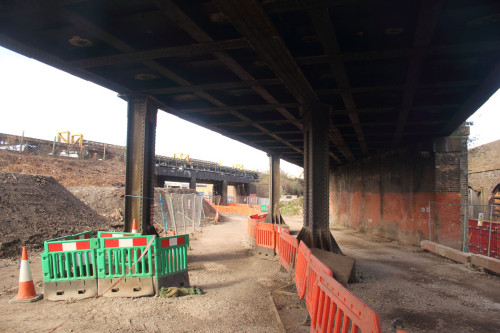 Sliding in the pre-formed concrete slabs for the new tunnel involved the use of a 50-tonne forklift truck. Skanska’s project manager said she was disappointed not to have been allowed to drive it.

All told, it took 9 days for the replacement works, and had they tried to remove all three arches, there would have been a higher risk of overruns and delays in returning the tracks to the train operators.

For the next few hundred years, the old Victorian bridge will slowly rust down entombed within its concrete sarcophagus.

The exterior of that new box will be decorated with a grass wall, which in addition to looking nicer, has the double benefit of being harder to climb up, so less likely to attract trespassers. 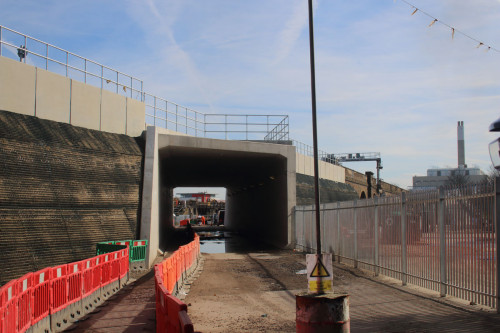 In a curious historic twist, what was and will remain a road, was once itself a small goods railway line.

In addition to the works in Bermondsey, the team are also undertaking strengthening works along the viaducts around London Bridge where necessary. One example is that sometimes they switch from metal bridges to concrete boxes as they replace regularly wearing out wooden sleepers with heavier stone ballast.

Elsewhere on the expansive site, the new ramp down from the main viaduct is nearly completed, with some decorative brick arches being finished off. Trackside, the railway lines are being relaid to tie in with the new ramp, and that has involved a lot of shuffling of tracks sideways. 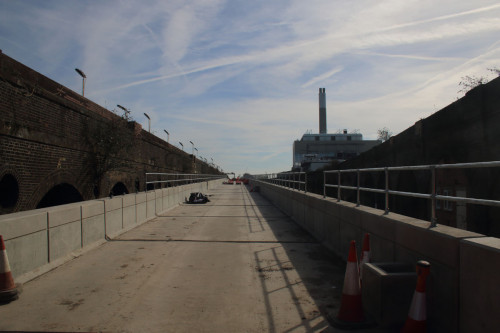 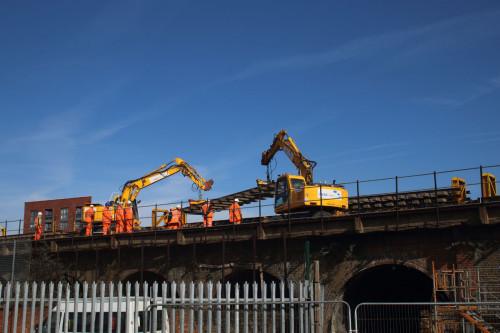 Just as the slope down is nearing completion, later this year, a series of existing brick arches will be demolished, to create the opposite side of the new railway slope, so that they end up with a gentle dip down and back up.

And in the middle of that slope will go a new box, and over that the Thameslink trains jumping from one side of the tracks to the other, but no longer requiring lengthy gaps in the timetable to allow them to get across. 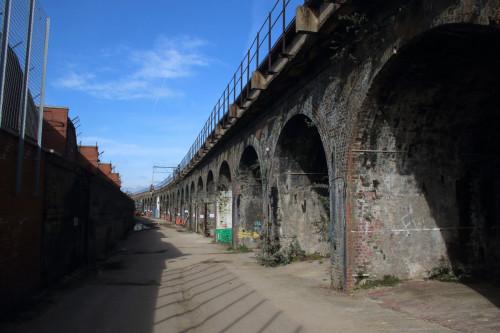 I said that the site is expansive, and it is a large working site in width/length, but also quite cramped. Lots of existing railway arches and work sites make for a surprisingly cramped working environment in places. Significant, as even with reusing as much as they can on site, there will still be an expected 26,000 cubic metres of muck to deal with.

Some of that muck is being reused for earth embankment works, and some for landscaping. Part of the plans includes converting the old Bolina Road into a pedestrian and cycle route, with gardens. 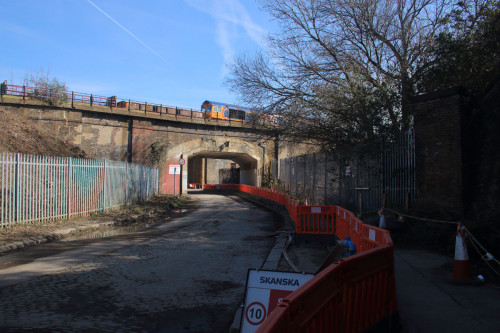 The works should be finished late 2016/early 2017. And this large complex junction is just one small piece of the entire £6 billion Thameslink project.

When fully completed though, the track realignments through the London Bridge area will let Thameslink run 24 trains per hour through the central section — which is pretty much equivalent to a London Underground style turn-up-and-go grade of service. 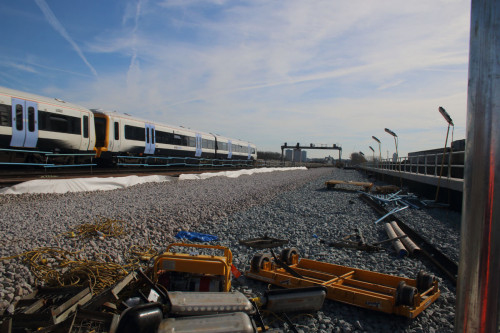 Site visit was thanks to Network Rail and Skanska, as part of Open Doors Weekend. They also uncovered part of a disused railway station — more about that next week. 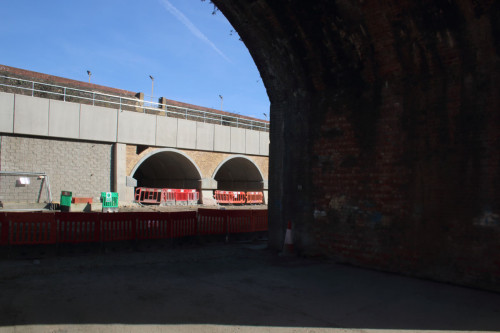 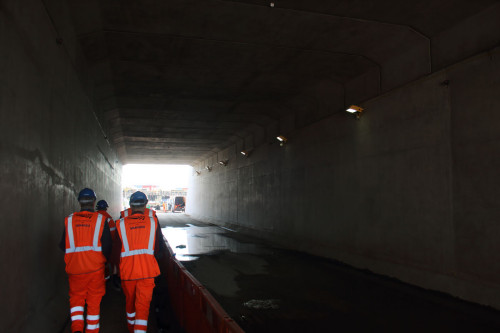 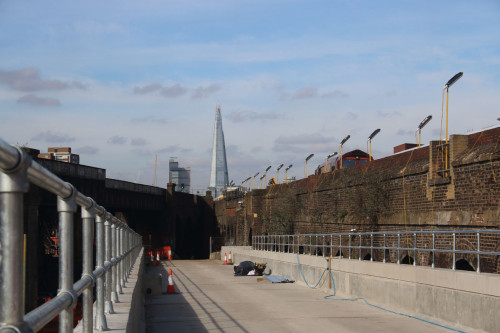