A tiny shade under 600 years ago, Winchester College needed a new barn to replace an older one on some land it owned just outside what is today Heathrow Airport.

Today that barn is still standing, largely intact and has been rightly described as the “Timber Cathedral of Middlesex” by John Betjeman. However, the past two decades saw it very nearly not survive to see its 600th birthday.

What is more correctly known as Harmonsdworth Great Barn was purchased by English Heritage only this year to save it from decay, and is now open on two days of the month during the summer.

I went along to have a look.

If you don’t drive, then the easiest way to get there is by local bus from Heathrow’s Terminal 5. Bus route 350 drops you off a short walk from the barn itself, which is at the end of a rather charming village lane, with two pubs, two corner shops, a church and a phone box.

Following the sign to the barn lead to a gate in what looks like a private estate, but venturing just past the “this is a private estate” sign does show that you are in the right place as the barn becomes quite obviously visible.

English Heritage has permission from the estate to use the road approaching the barn (and the car park at the back), but the rest is fairly understandably off-limits. 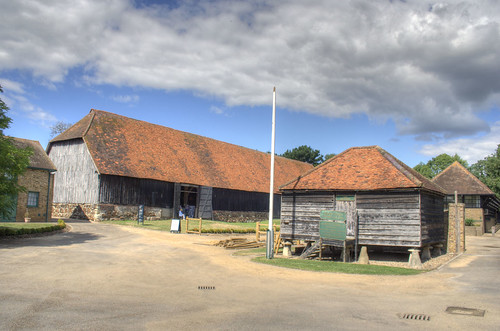 There has been a barn of sorts on the site, which was given to Winchester College by the Bishop of Winchester in 1391, and in 1426-7, a master carpenter was commissioned to build the Great Barn. Although two side wings have been lost, and a fire in 1972 took out one end, the rest of it is original 600-year-old wood, flints and tiling.

This is damned impressive, especially when you consider that it was still being used as an agricultural barn in the 1970s.

Sadly, a sale to a developer in 1986 is the start of its decay. That company went bust and offers of the barn for £1 to the local council and English Heritage were turned down. It was sold to a property speculator who apparently hoped to profit from the sale of land for Heathrow’s third runway and let the building deteriorate.

In 2011, English Heritage carried out emergency repairs and earlier this year settled with the absentee landlord to buy the barn for £20,000, and secure access to open it to the public. 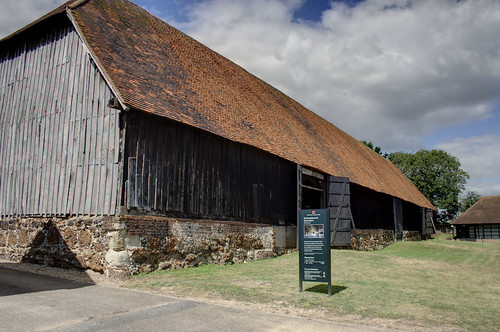 Entry is via one of the three double doors, and local volunteers have a stall offering leaflets and display boards with photos of its 20th-century history. But is the interior that wows, and justifies its description as a timber cathedral. Indeed, historians speculate that cathedral builders were probably involved in the barn’s construction. 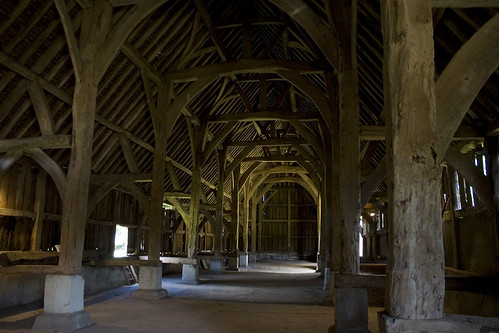 You could certainly fit a large church in here, and the bays along the side with Gothic arched buttresses ooze memories of churches I have visited. The end closest to the road is the one damaged by fire, and since restored although it is more noticeable from the outside around the back as the colour of the wood planks changes. 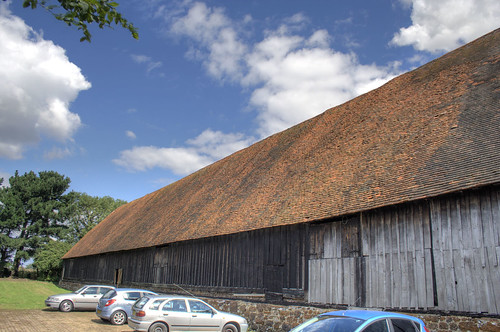 Do also notice the grain store, the small wooden building which has also been restored and still sits on probably original stone mushrooms to keep the grain off the ground.

The barn is open on the 2nd and 4th Sunday of each month 10am-5pm from April to October. Entry is free.

A couple of leaflets are available for 50p. 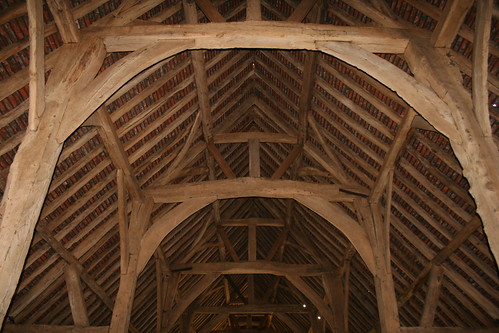 If it is open, the local church is also worth a look inside while you are there.