Anyone using Victoria Station at the moment can’t have failed to notice that rather a lot of building work is going on, as part of a 6 year upgrade project that will see a substantial upgrade of the ticket hall facilities and extra escalators installed.

Last week, as part of the Open Doors Weekend, I was able to take a look at the building site. Alas, photography was banned, so the images/photos below are from other public sources.

Despite the subterranean nature of the site, most of the work is currently taking place above ground, as the engineers prepare the site for the later station construction works. 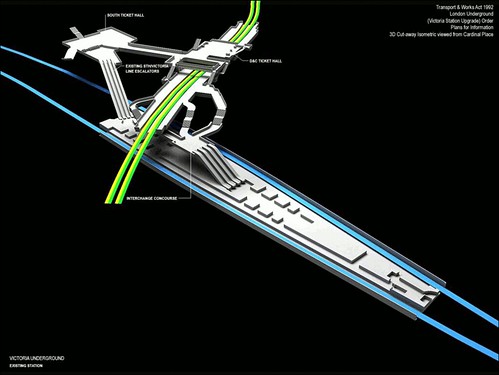 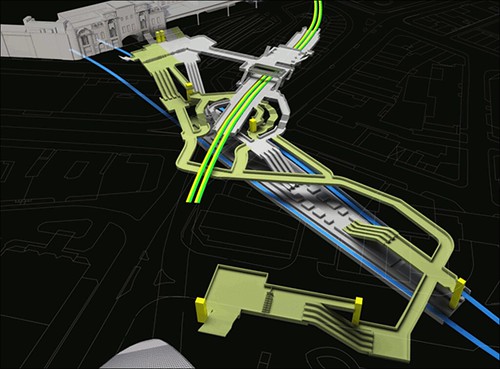 The finished complex will be about three times the size of the current site.

The most obvious change is the arrival of a new Northern ticket hall, which will sit just next to the newish office and shopping centre on Victoria Street. However the existing ticket hall next to the mainline railway station is also getting a huge expansion, and an entirely new set of escalators down to the Victoria line.

Anyone who uses the station in the mornings will appreciate the need for the expansion, but traffic projections mean it is vital. The station caters to around 82 million passengers per year at the moment, but this is expected to increase to 100 million by 2020.

It is however going to take until 2018 to complete the upgrade works, as the area is frankly, a right pain in the neck to work in from a construction point of view – especially as they need to keep the station open during the building works.

Not only is the area absolutely ram-packed with sewers and water pipes – a couple of which are huge — as well as the usual services of modern day life, the geology is rather difficult to work with.

Ideally, a tunnel would go through London Clay, which is a nice material to dig through, but while there is clay here, most of the tunneling work will be above that layer, in a deep bed of gravels and sands. Very wet, very loose gravels, mainly as part of the low lying marshes associated with the Thorney Island area.

Actually, so wet that the Circle Line pumps out around 90 litres of water per second from its tunnels to stay dry – water that is then used to cool the station.

Not the sort of material you can tunnel through.

It is those unforgiving conditions which are causing so much of the above ground surface works that have seen parts of Victoria sealed off behind hoardings. For here, they are deploying the UK’s largest ever use of “jet grouting“.

Essentially, they drill down a pipe into the ground and then pump in under very high pressure a form of lightweight concrete. They will in fact through do this 2,400 times, and by carefully positioning each pipe and grouting they can construct an area underground that is mainly made up of gravels held in place by the light concrete mix. A much better material to then tunnel through.

However, to make things worse, the pipes have to often be drilled down into the ground at sharp angles to maneuver between the various utility services that run just under the surface.

Once the soil has been stabilized this way, they can start tunneling what will become a new passenger tunnel linking up the two ticket halls.

While all that work is going on, a deep shaft down to the Victoria Line has already been constructed – on a building site cleared from the demolition of an old block of offices. You can just about see the shaft on the below photo – as a circular void in the lower right side of the building site. 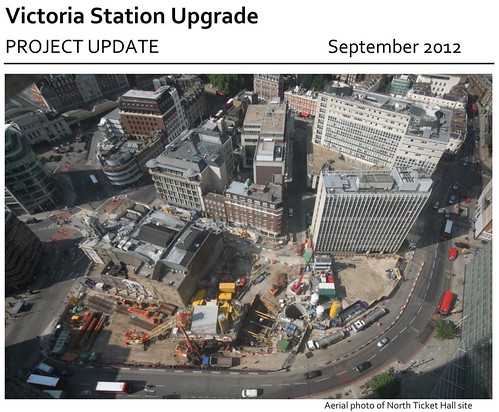 Again, not a simple task, as the shaft slots in between the two running tunnels of the Victoria line, and also had to warp slightly to fit between the tunnels. The shaft is just 300mm from the tunnel walls.

To make things even worse (!), the Victoria Line tunnels at this specific location were built using an experimental form of tunnel ring, and no one was entirely sure how it would react to a large void appearing next to it.

They also had to stop half way because of the Olympics – having something go wrong with the Victoria Line tunnels would be bad at any time, but especially so during the Olympics.

That shaft will serve as a new emergency exit, and also lets them construct deep down, a set of new cross passages between the two Victoria line platforms. Once those are ready, then other passages along the platforms can be closed off in order to allow construction there to proceed.

A lot of the work going on is less about creating new facilities, than in creating capacity to close off existing services so they can be worked on. Closing off tunnels on an already overcrowded site without providing replacements during the construction is simply not possible, and is also a factor in why the site upgrade is going to take so long, and cost so much.

The triangle of land that was sealed off next to the mainline station will eventually become the site, underground, of the expanded southern ticket hall, and the site above ground an open plaza. The entrances that blocked the area will not be replaced, as their function is better served by the new Northern ticket hall.

The two new ticket hall spaces will be constructed by a top-down method. Basically, deep piles are driven into the ground. Very deep because of the water logged water problem -so about 55 metres on average. 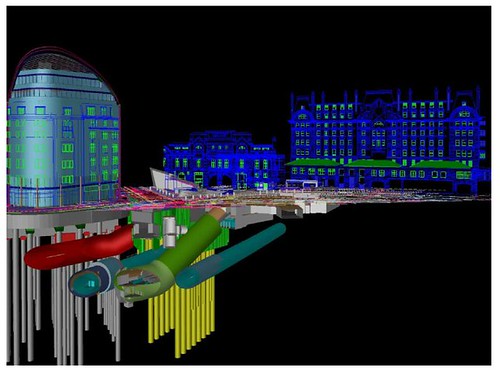 A new roof slab is constructed, then they dig underneath that to create the ticket hall, then the lower floor, and then from there, the angled shafts for the escalators. The new complex will have 9 additional escalators, and 7 new lifts, making the station fully accessible for the first time.

The new Northern Ticket hall will be constructed underneath a major road, which will make for some interesting traffic diversions during construction. In essence, they intend to close off half the road, construct the station box, then flip the road over on top of the new station, and build the other half next to it. 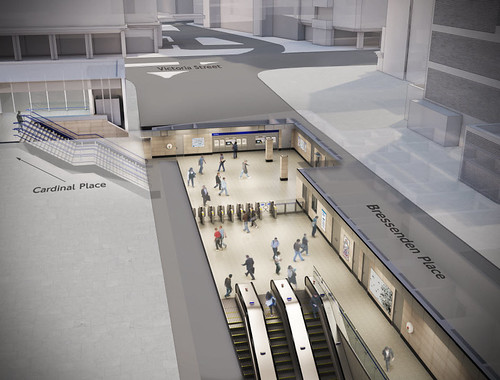 The new northern ticket hall is expected to open in the summer of 2016, and the southern expansion in late 2018.

That timing also fits in with the expected completion of most of the Land Securities development work of their offices along Victoria Street. The development of the offices at the same time as the tube station upgrade is causing some problems, mainly with lorry traffic. Naturally that needs to be minimized, and sadly, it just wasn’t possible to take advantage of the mainline railway station right next to the building site. However, having all those lorries from different companies converging on the area is going to be a bit of a public relations issue.

In fact, so much other work is going on around the area, that the Victoria Station team is occasionally blamed when noise from someone else annoys local residents — especially the rather special resident in a Palace just up the road.

It’s a difficult site to work on, so it was interesting to get the behind the scenes look at the place, even with the ban on photography, hopefully the above clarifies why it is such a confusion of diversions and men working in hi-vis jackets around the station at the moment.