A look around the new Library of Birmingham

Birmingham has two very large public spaces, separated by the brutalist architecture of the public library. One with the town hall and next to the market and main shopping areas, and on the other side of the library, sits a more artistic quarter with theatres.

The brutalist library, had suffered the fate off too many such concrete council owned buildings — neglect. It has just closed down and is soon to be torn down.

Unlike most libraries closing at the moment though, it has been replaced — by a coloured confection. A strange wedding cake of a building with layers of decorative icing around the edges.

To get to the new library though, the easiest route is through Paradise. More of a purgatorial experience though, passing through what was intended to be a delicate foyer with cafes and has instead been taken over by Greggs, Spar, Wetherspoons and McDonalds. 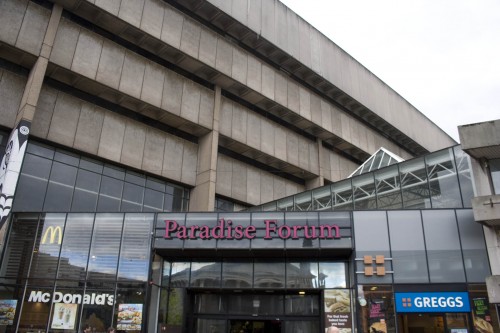 An inverted Dantean comedy with stepped layers shrinking above your heads, and thanks the clutter in the way impossible to appreciate properly. People hurry through, barely stopping, and glaring if anyone does stop to try and find a place to get a photo in. Limbo is not permitted.

Once through purgatory, you come to the sunlit heavens of Centenary Square, its war memorial, and the new library building.

I have a rule in architecture, that is more often correct than not, that if you have a seemingly bland building and it is brightly coloured, then it is probably owned by the council.

And this is most certainly brightly coloured, and the decorative facade, while in itself not unpleasant, just seems to be a decorative addition to disguise the fact that this is just a series of slabs stacked on top of each other. There seems to be very little actual architecture going on here. 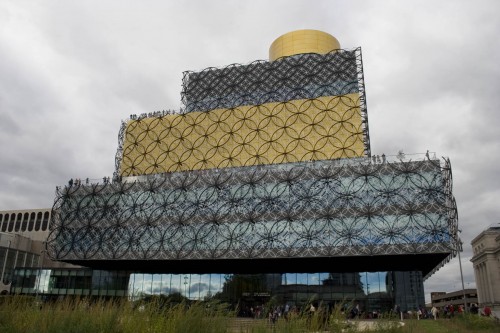 Once inside though, you are drawn almost immediately to the escalators heading upwards, and inside, this is a visual treat as a central rotunda elevates people to ever higher levels in a space surrounded by books.

If you had taken the British Library’s great reading room and stuck escalators through the middle, this is the effect you would get — books as decorative adornment in a space designed to transfer people from one floor to another.

Not to say using books for adornment is itself bad — many of the libraries in larger Victorian homes were purchased in-bulk to look good and show off good taste rather than to be read. 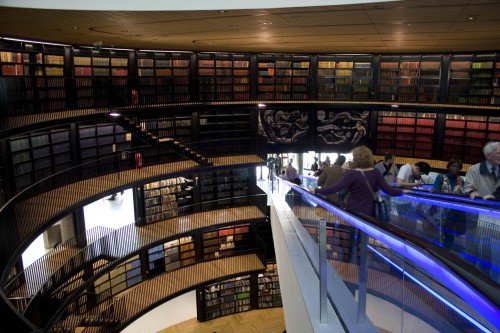 Up to the third floor, and here is one of the non-book visual treats, a roof terrace area that lets people relax outside, smell the quite pungent planting, and look down over Birmingham.

But its better to go higher, for there is also the secret garden to see. A garden that seemed less secret by the minute with repeated exhortations not to use the glass elevator, but take the less scenic ordinary lifts to the 7th floor. 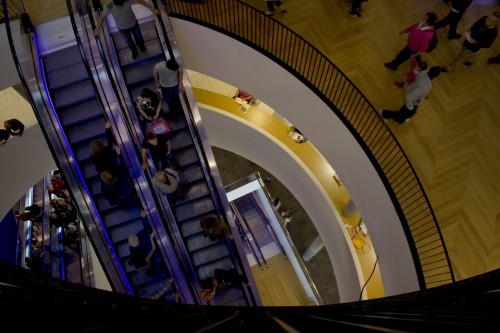 The signs next to the lifts suggested using the stairs to burn calories and be healthy, then a sign next to the stairs issued dire warnings about how many steps there are between floors.

Getting up to the 9th floor by stairs also meant navigating a narrow winding, and very warm corridor that was almost labyrinth in layout and takes you to one of the hidden marvels of this modern building — a Victorian room.

Built in 1882, the Shakespeare Memorial Room was moved in 1972 to sit inside the concrete skin of the old library, and moved again to sit here, right at the very top of the new one.

On a busy Saturday, the room was busy, but not so much so that you couldn’t wander around freely, and notice how the carpet on the floor subtly matches the design of the steel rings decorating the exterior of its modern home. 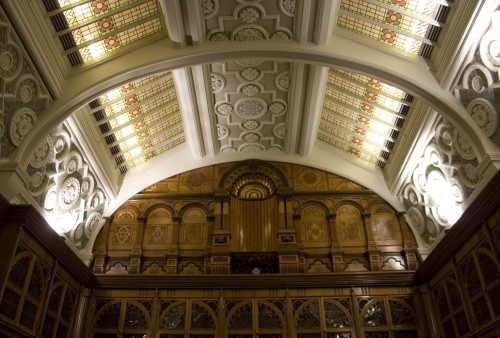 However, it on the 7th floor that the secret garden unveils itself, and offers spectacular views over the city. OK, to be blunt about it, this is not a city with a lot of historic architecture to see from up high, but high vantage points will always have their appeal.

If the aim of the roof terraces is to draw in visitors, then they work, but the old library was already hugely popular — I suspect in part thanks to being in the heart of the city rather than in a suburban outpost. 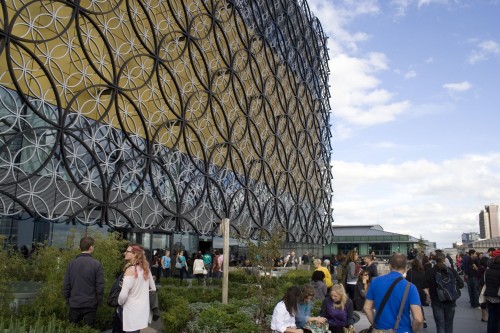 My main gripe about the library though is the library — the shelving is not integrated in to the design and structure of the building. They are as substantial an element as the shelves in a supermarket. Easy to shift around, or remove entirely, this seems to have been a building that is a library today, but could fairly quickly be something else in the future.

It shares facilities with the theatre next door, and indeed, in show-off style, has a lot to resemble a theatre or cinema complex. The superficiality of the shelving in how they have been tied into the use of the building gives them a strange air of being a temporary space filler. 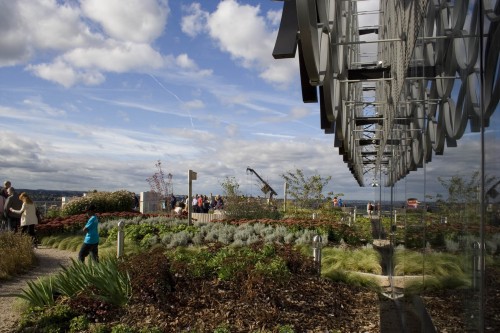 That might be a disappointing development, or enlightened long term thinking by a council that recognises that e-books are making lending libraries slowly obsolete and they want to ensure that the floors of books can be reused for something else. 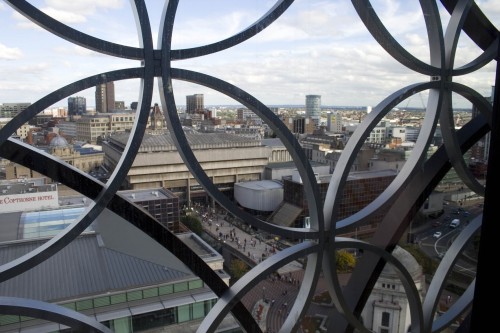 Once the old library is demolished, its replacement may also do more to tie the two separated town squares into a more cohesive whole.

But that is for another visit, in a few years time. I wonder if the new library will still be a library though.