As anyone who has used the area over the past few years will have known, much of the area around Tottenham Court Road tube station is a huge Crossrail construction site. Two massive tickets halls are being constructed at the Western and Eastern ends of the new station platforms.

Except that isn’t what is happening.

Nope, that vast building site next to TCR tube station is not Crossrail!

OK – semantics aside, the site is properly known as the upgrade project for the tube station in order to cope with the future Crossrail, but in terms of who gets what when finished, the only bit that is Crossrail is the escalators down to the platforms (shown in orange below). 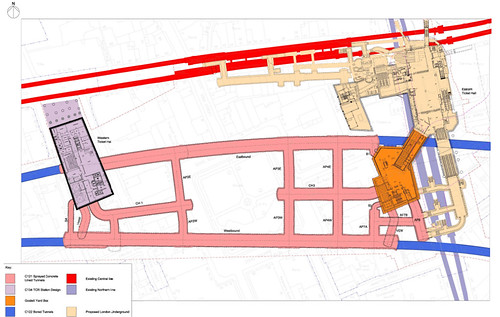 Not that the average user will notice the difference when it is finished, but it’s an interesting snippet about the project to be aware of.

What Crossrail does have though is a ticket hall at the other end of the platforms (purple on the map above), and it will have what is likely to be the second-longest escalators in London, after the ones at Angel tube station.

The ticket hall at Dean Street is another of those, should be easy but is actually a right pain in the neck construction sites as it was constrained by a very tight deadline.

Unlike most other “holes in the ground” which have the two train tunnels on either side, here, one of the train tunnels runs right through the middle of the box, so digging down 25 metres to the bottom as quickly as possible was critical — otherwise the TBM would have to stop and wait for the ticket hall box to be completed.

Ordinarily, a box of this size would have been built from the top down — as at Bond Street — where they dig down one level, put in a concrete floor, then dig underneath that down another level and repeat. The huge advantage of that method is that as you go down, the concrete floors support the sides and give you ever-increasing amounts of floor space to work in.

At Dean Street, getting down to the bottom as quickly as possible was the priority, so they put in a diaphragm wall around the site, and dug down as fast as possible. This is why they now have a huge hole in the ground with the walls being held up by massive tubular props. 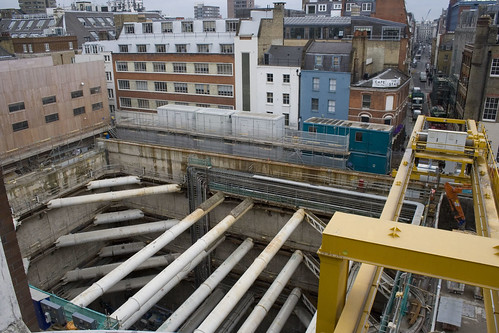 Oh, the props, usually a rust brown are painted white deliberately — helps reflect heat to stop them expanding and also refracts light down into the box below. 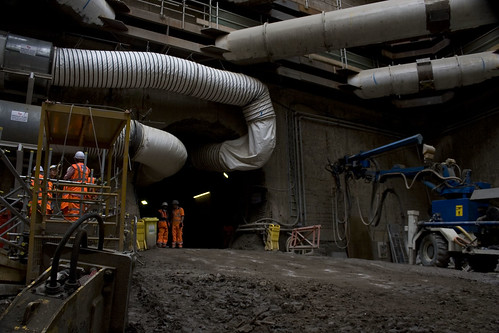 This gives the place a more organic earthy feel to it, unlike the slick perfection of the train tunnels. Although all of that will be covered up with wall panels by the time the public get down there. When finished, passengers will come down the escalator and go into the tunnel which then curves around and along a corridor, off which side passages take you to the platforms. One of those side passages has already been dug out — and is currently being propped back up again because just on the other side of that wooden scaffold is the TBM. 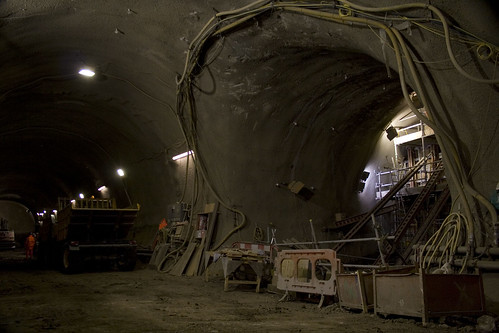 Right now it is drilling its way past the station ticket hall, leaving behind a concrete train tunnel. That tunnel is, however, too small for the platforms, so once the TBM is out of the way, the whole thing is dug back out again, and the tunnel enlarged. While superficially wasteful in materials, it is less risky to let the TBM go past then build the platforms, than try to build the platforms and still be digging when the TBM arrives. Delays to the TBM are to be avoided at all costs. 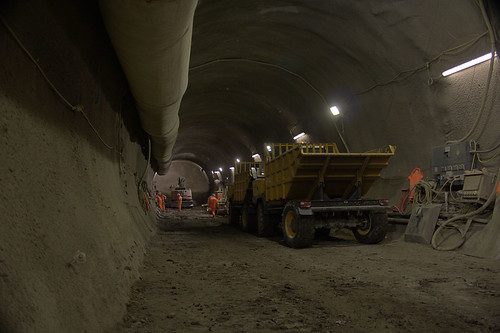 Inside the station box itself, preliminary tunnels are being dug the sidewalls for the other TBM to have something to grip onto as it passes through. Once passed by, space will be covered over with a protective roof, as the tunnel is used as a working site for the TBM, while the rest of the box is fitted out for the station and those earlier mentioned very long escalators. 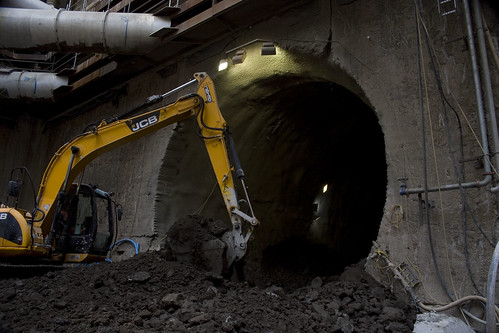 Oh, even though they are working in a large open box, at that depth if they run into any natural gases that can sometimes exist in the soil such as methane or sulphur dioxide, then the bottom can become toxic very quickly. So, a stack of oxygen rebreathers stand ready next to the escape route. Just in case.

A final comment about the future by reflecting on something I was told back in the mists of time when Crossrail was a freshly signed off project.

Crossrail has been planned and plotted for decades, so while the final details were never known, enough was known that construction sites had to take into account a possible future Crossrail tunnel running near them. In fact, the Moorhouse Building constructed in 1999 was built with facilities in its basement for Crossrail – even though the railway wasn’t even approved until 2008.

Likewise, the same is happening for Crossrail 2 — although not formally decided upon, there is enough certainly to say when rather than if, and as such bits of land are marked all along the likely route as safeguarded from developers digging down too deeply.

Crossrail 1 is not immune to the considerations about Crossrail 2 — and as both services will share a ticket hall at TCR, what is known as passive provision is made into the design of Crossrail 1 so that it doesn’t affect its north-south brother when that finally arrives.

And indeed, the very first bits of Crossrail 2 have been constructed, as the new passenger tunnels leading down to the Central Line have two little spurs off to the sides, and a bit at the end — all ready and waiting for when CR2 arrives. 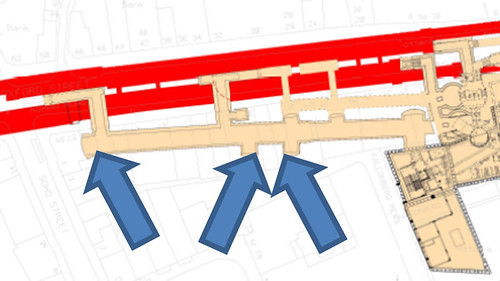 Now that is forward planning. 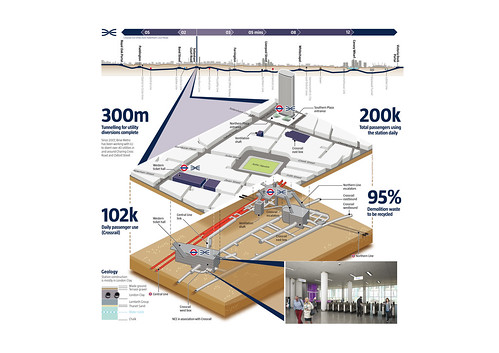 Thanks to Crossrail for the site visit, and to the workers who put up with our antics on site.

The rest of my photos can be seen over here.