A look around St Peter’s Church in London Docks

On one of the main roads in Wapping stands what looks externally to be a fairly average Church, but like most Victorian buildings of its time, the generic municipal exterior conceals a much more interesting interior.

The Church of St Peter’s London Docks also has a history as rich as its interior decoration.

The land for the church was purchased by the newly formed Community of the Holy Cross, an Anglo-Catholic organisation at a time when Catholicism was still controversial in England. The founder of the Community, Charles Lowder was based just up the road at the previously mentioned St George’s-in-the-East, but his mission was often attacked by Protestant mobs, especially when he started wearing eucharistic vestments during services.

Though he was often accused of “Romanism” Lowder was actually said to be strongly loyal to the Church of England and was deeply upset by a number of his friends and curates becoming Roman Catholics.

Eventually though, 150 years ago, in August 1860, Lowder acquired land for a new church and began raising funds for its construction. St Peter’s was eventually consecrated on 30 June 1866.

The church itself was set further back from Old Gravel Lane (now Wapping Lane) than it stands today – as a second similar building was placed in front of the church about 20 years later, although it retained the same external decorative style, and created an interesting portal entry to the Church itself. 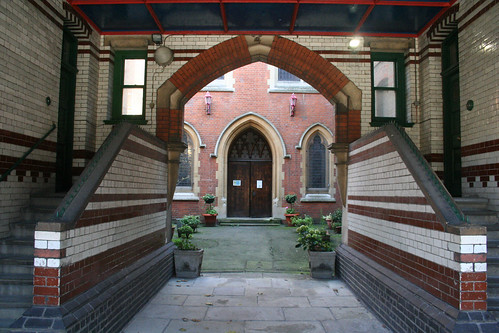 The interior is reminiscent of the Anglo-Catholic revival, which turned its back on the austere Georgian decoration for a more decorative style that better fitted with the High Church traditions. Another good example of the style would be All Saint’s Church on Margaret Street, which is just off Oxford Street in the West End. 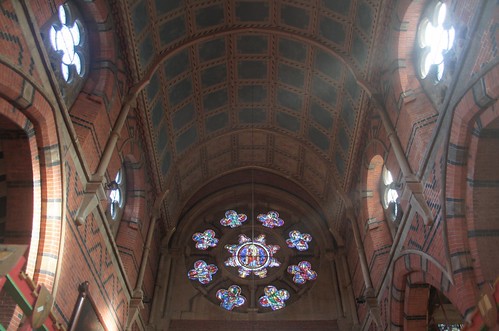 I actually visited the church a couple of weeks ago as there was a car boot sale “in the car park” to raise funds for urgently needed repairs to the roof. Sadly, the car park was not next to the Church as I had expected so I never found it – but I did go inside the Church for a visit.

From the smell (and time of day!), it was evident that a service had only just finished, which also meant that the sunlight coming in through the windows was casting very ethereal beams of light around the Church which were quite delightful to see. 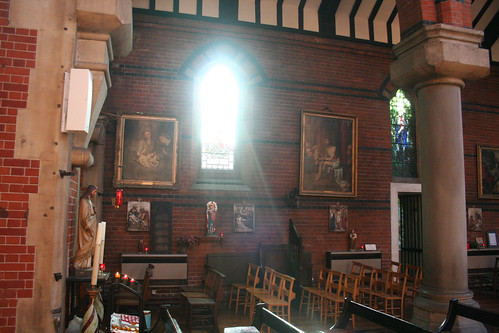 It is very much a community church as is evidenced by the scattering of local school children drawings and slightly shabby areas to the sides of the main church. While I don’t share the faith, it is still nice to see local communities that are active though.

A side chapel had a candle-lit gloom to it which was quite nice, although my camera decided to capture all the details instead. 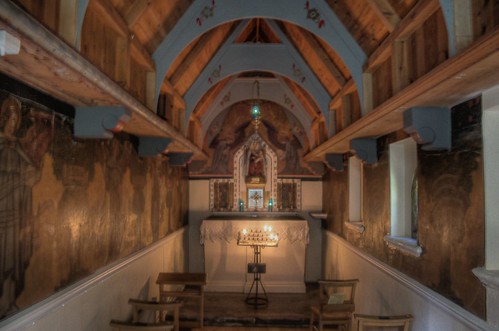 Just around the corner from the Church is a classic symbol of a building that was once a school – the two statues of a boy and girl on the upper floor.  The former charity school building of 1719 is now used as a community centre and by the Academy of St-Martin-in-the-Fields.

Raine’s School was founded by Henry Raine (1679 – 1738), a Wapping brewer and philanthropist, who is now buried in an impressive, and recently restored, grave at the rear of St George’s-in-the-East.

Apparently, the statues are replicas, and the original now reside elsewhere, taken when the school moved out. 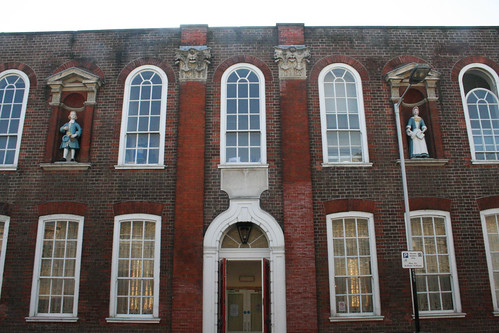