Sitting in the middle of the Kent countryside sits a huge Tudor mansion, and for just a few hours, and on a few days, it’s open to the public to go inside.

This is Cobham Hall, just off the A2 near Rochester.

There has been a manor house on the site since the 12th century, although what we see today is largely of Tudor origin, and has passed through a number of different families, largely thanks to previous occupants being on the wrong side of civil wars or attempts to depose monarchs.

It is however currently occupied by a private girls’ school, when the current Earl of Darnley had to give it up to pay death duties.

Now, having been in a number of “grand building turned into schools”, it was either going to be a very grand private school, or very utilitarian — and the only way to find out was to pay a visit.

If you don’t drive, the only way to get there though is by train, and then a long walk or cycle ride. The local station is Sole Street, and the local village shop has a London Underground themed sign in the window, and I was delighted to see a still functioning tin tabernacle.

A long walk up past fields of sleepy vines, to The Street. Not just any street, but The Street, in an area where there are few streets to compete for the title. Also, Owletts, a National Trust home, which is closed for winter.

This however is also the village of Cobham, where three pubs within a hundred yards all seemed to be very busy serving Sunday lunches. Whatever it is they are doing right, the demise of the village pub has been firmly arrested here, and many a landlord of other village pubs should pay a visit to find out what their magical elixir of profitability is.

Cobham Hall is not in Cobham though.

To get to the hall, one more long road, which was closed on this, the one day I was in the area. Fortunately, a local footpath runs just beside it, and it was also easy to spot the motorists who felt the signs and traffic cones warning of road closures didn’t apply to them, only to be seen coming back a minute later.

The cause of the closure being road resurfacing works.

But fully 50 minutes after leaving the station, the rough countryside was replaced with carefully mown lawns, and posh signs warning of a private road and a school.

But, will the long walk be worth it, and on my goodness, will you get a look at that! 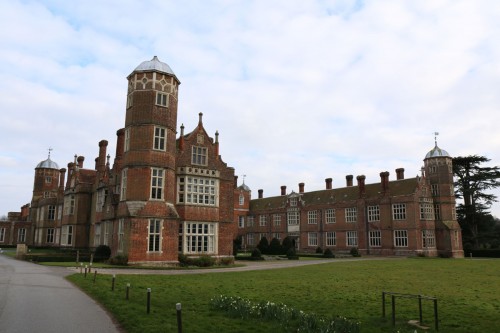 What a splendid construction, that oozes Tudor sex appeal in bricky form. Packed full of delightful brick and chimneys and glass, and ornate windows. A fantastic gatehouse, conceals as I just about noticed it in passing, is the entrance to the building for tours.

A long hall, with a massive totally out of scale fireplace, which it later turned out had originated elsewhere, then been moved. Just three of us on the tour, lead by a genial chap with an envelope of notes and a guidebook.

This is, as it turned out, a school more municipal than grand, with lots of routine furniture used within ornate rooms. 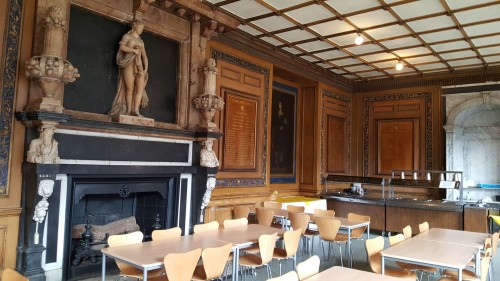 An astonishingly decorated hall was a dining room, with the marble work hidden behind metal canteen trollies. The boards turned out to conceal hidden windows, since bricked up.

A former chapel, never consecrated following a dispute between the Earl and the Bishop, now a canteen space.

The long gallery, now slightly shorter, and the school library, with weirdly, a once restored, and now slightly decaying carriage at the end. 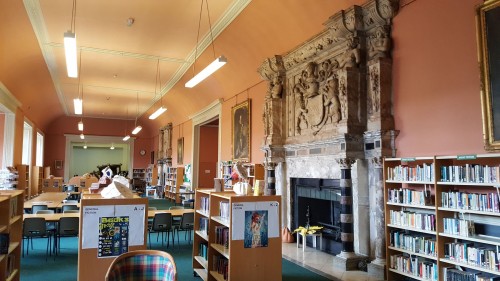 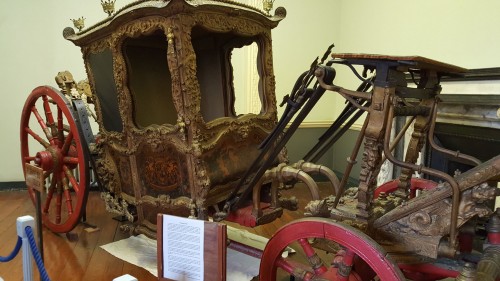 The Queen Elizabeth room, which the monarch never used as it wasn’t finished until after her visit is now the computer room, and we are told has one of the finest ceilings of its type in the UK. 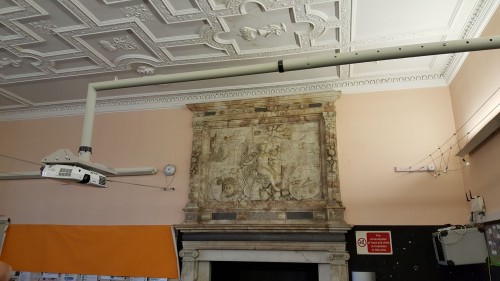 Lots of rooms, with lots of grand fireplaces and grand, sometimes original paintings. A tour guide who dropped dates, and names of Earls and Lords all over the place was however not offering any real flavour.

So Lord so-and-so lost the house because he opposed King James –really do tell us more! Lord whatever given the house ten years later. Such a gift, why him? What had he done? No idea.

Even this history fan was bewildered by the heady mix of dates and nobles being scattered around, in an order determined not by chronology but which painting we were standing next to.

And that sadly was the problem — in a building that looked magnificent outside, but rather shabby inside, we needed stories, tales, anecdotes. A chance to gasp in astonishment and laugh at a wry story. We got a spreadsheet of dates.

However, there was one treat to come, as behind a series of doors can be found a number of original untouched rooms.

Dusty, decaying, forgotten, I wouldn’t have been surprised to find Miss Havisham weeping in a corner. 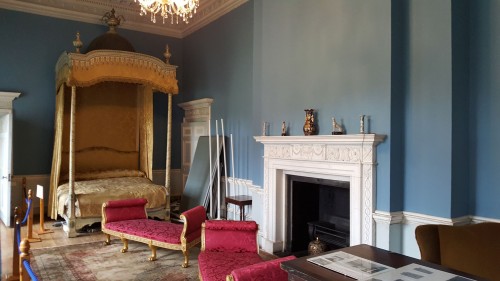 The one grand room that does remain though, is the afterthought at the end of the tour, for that’s where they serve tea and cake — and what a dining room it is. Double height, gilt decorations, a mighty organ and musicians balcony. 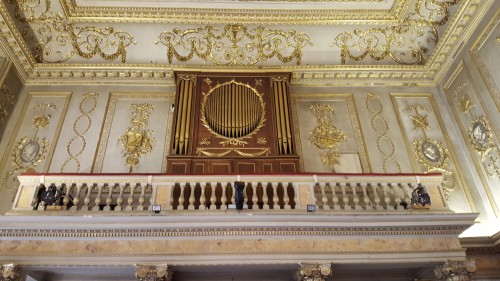 With limited time to catch the hourly train back to Rochester, I couldn’t stay for tea and cake, and made my long walk back to the station.

A pleasant countryside walk, with a rather disappointing interlude.

Having read their guidebook on the way home, it seems I did the tour wrong, as most of the book is given over to the gardens and the follies within, which sound magnificent. Not the building.

Or more accurately, the outside of the building is amazing, the inside less so. I would have loved to see more of the outside, the part where you can still see the heritage under the layers of school paint.

Cobham Hall is open to the public on a number of Sundays between now and October, and the Bank Holidays. Check their website for open dates. 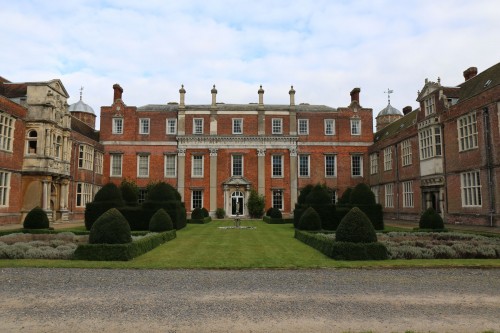