Published 28 June 2009 by By Ian Mansfield Events and Tours, History

As much as a admire the Victorians for many achievements, they did have two rather annoying habits. One was to rewrite, or at least censor ancient history when they discovered the supposedly enlightened folk were rather keen on Bacchanalian propensities. Equally, while old traditions were carried out, only if they were by good upstanding persons, if the rude masses should try to hold a fair or party, such things would be frowned upon if not outright banned.

One such victim of the Victorian prudishness was a long standing Horn Fair held at Charlton – which was suppressed in 1874 due to the drunken antics therein. The fair was resurrected in 1973 but is a much more sedate (aka, family friendly) affair now.

In the 1820s’ Daniel Defoe wrote of the fair: The mob indeed at that time take all kinds of liberties, and the women are especially impudent for that day; as if it was a day that justify’d the giving themselves a loose to all manner of indecency and immodesty, without any reproach, or without suffering the censure which such behaviour would deserve at another time.

The Horn Fair has a somewhat dubious, if licentious history.

Peter Cunningham, in his Handbook of London, thus gives his version of the story:

“King John, wearied with hunting on Shooter’s Hill and Blackheath, entered the house of a miller at Charlton to refresh and rest himself. He found no one at home but the miller’s wife, young, it is said, and beautiful. The miller, it so happened, was earlier in coming home than was usual when he went to Greenwich with his meal; and red and raging at what he saw on his return, he drew his knife. The king being unarmed, thought it prudent to make himself known, and the miller, only too happy to think it was no baser individual, asked a boon of the king. The king consented, and the miller was told to clear his eyes, and claim the long strip of land he could see before him on the Charlton side of the river Thames. The miller cleared his eyes, and saw as far as the point near Rotherhithe. The king then admitted the distance, and the miller was put into possession of the property on one condition – that he should walk annually on that day, the 18th of October, to the farthest bounds of the estate with a pair of buck’s horns upon his head.”

Although it was a common tradition that the husband of an unfaithful wife should wear horns on his head as a mark of shame, I have some difficulty with the tale, as the idea that a King would grant a mere miller a swathe of land as vast as claimed for just one shag. Also if such a single (and hence incredibly rich) landowner actually did exist, then it would be recorded, and no such records exist.

Equally, the fair used to be held around mid-summer and was only moved to October around the 17th Century.

Despite saying that – there could just possibly be a related bit of history which could explain how such a legend arose.

When the famous Magna Carta was issued to King John, as part of the subsequent editing process, a lesser known Magna Charta de Foresta also emerged a couple of years later. This secondary document relaxed a large number of laws which made it almost a capital offence to hunt in the forests, which were solely the preserve of the Monarch. The forests and lands belonging to the Monarch had been greatly expanded, causing considerable anger among the populace, so the law also reduced the size of the land controlled by the Monarch, making it available for common folk to use.

It seems to me that the tale about King John granting land to a commoner is related in style to the actual law that his son signed just a few years later – which had a not dissimilar effect.

When the law was signed by King Henry III, there was considerable rejoicing – and it is possible that the Charlton Horn Fair owes its origins to those celebrations. There ware various other Horn Fairs dotted around the country, and a good many of them all seem to date from charters granted during King Henry III’s reign, and certainly the Charlton Horn Fair can be traced back that far as well, although its exact origins are uncertain.

The Horn aspect has been linked by some commentators to earlier pagan traditions, but another aspect of the Magna Charta de Foresta was to reduce the fines on hunting and encourage the reduction of earlier New Forests. The link between the law and hunting could explain the popularity of wearing horns, to show that the commoner has been allowed to hunt freely.

No one is really sure, and I am speculating about the link with King Henry’s laws – although I do rather like my idea 😉

The Charlton fair seemed to reach its zenith in popularity during the Restoration period, and flotillas of boats would fill the Thames as they brought revellers down from London to Charlton – often in fancy dress or cross-dressing and wearing horns. William Fuller wrote in 1703: “I remember being there upon Horn Fair day, I was dressed in my landlady’s best gown and other women’s attire, and to Horn Fair we went, and as we were coming back by water, all the clothes were spoilt by dirty water etc. that was flung on us in an inundation, for which I was obliged to present her with two guineas to make atonement for the damage sustained.”

Cross-dressing seemed to be a very important part of the festivities.

While the fair itself was restored in the 1970s, the parade from Cuckold’s Point in Rotherhithe has remained notably missing – until today that is.

This morning, the procession from Cuckold’s Point to Charlton was resurrected – and I went along to watch.

The procession started fortuitously close to where I live, albeit on the other side of the river and after starting roughly where Cuckold’s Point would have been, progressed largely along the riverside blowing horns and banging drums.

Locals came out to watch this madcap gang of men in drag and a lady wearing horns pushing along a decorated wheel while a few photographers, myself included ran around the place trying to take photos. 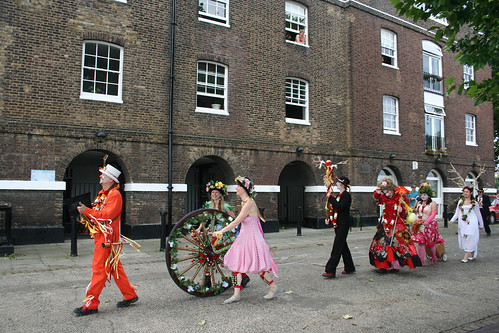 Some passers by joined in the fun – and some did not.

They took a detour in the Surrey Docks city farm, which is directly opposite my flat (I can usually hear the cows), and I took a slight detour away to get a good vantage point by a tiny, if rather pretty alleyway known as Randall’s Rents (The Greenwich Phantom should have a look!). This is a row of former workers houses for people working in the local docks and is thought to be one of the oldest parts of Rotherhithe still standing. 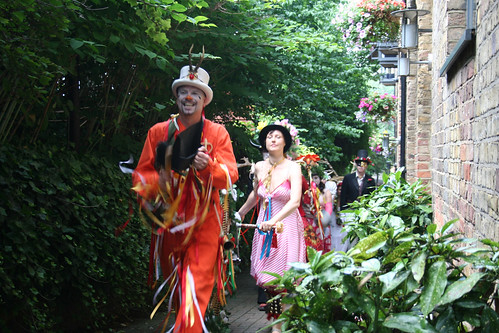 Then round the docks and eventually about an hour later they stopped at the Dog and Bull for lunch, where I left them. Today there about 20 people in the procession – and maybe one day it will grow in size to match the earlier times when hundreds of people would progress to Charlton.

Being more than a little off-colour over the weekend, and exhausted from trotting around on a hot morning, I didn’t pick up the procession when it restarted or go over to Charlton, although I gather a local blogger was there today.

My full photo collection – as usual over at Flickr.

Two other recently resurected traditions that those charming Victorians frowned upon are the Jack in the Green and Easter Chair Heaving.