A history of pubs on the London Underground

As we all (should) know, drinking on the London Underground has been strictly forbidden since 2008, but if you go back further in time, there used to be plenty of drinking on the Underground, as it used to have pubs inside the stations.

In fact, drinking on the Underground was already sort-of already banned in 2008, but the ban was rarely enforced.

The TfL Bylaws 1999 already stated that consuming alcohol on trains was forbidden — unless explicitly permitted by railway staff. It was just that the rule was largely ignored.

The drinking ban of 2008 was more a case of tweaking the existing rules and throwing a ton of publicity at it to make it sound like something new was happening.

Anyway, back in older times, not only was drinking from an open container permitted but at one time there were around 30 pubs on London Underground stations.

The pubs were especially popular a hundred years ago, as they somehow escaped the introduction of licensing hours during WW1 which were aimed at stopping workers from getting drunk at lunchtime and impairing the home war effort.

Of all the pubs, while most were in the ticket halls, some were also to be found on the platforms themselves, at Liverpool Street, Victoria and Slone Square, all on the clockwise platforms. Probably the best known is the former pub on the westbound platform at Sloane Square station.

Known as the Hole in the Wall, it was open to travellers, and also the general public if they purchased a 2p platform pass, “unless you can come to some arrangement with the ticket-collector.”

A short note in The Times of 9th August 1949 on the rebuilding of the station noted that the “tavern” had been on the platform ever since the station was built in 1868.

I believe it was the last of London Underground’s pubs to close, back in 1985, which is probably why it is still the best remembered. It was also a major location in A Word Child, by Iris Murdoch, which also featured another London Underground pub, at Liverpool Street.

Iris described the bars as “the source of dark excitement, places of profound communication with London, with the sources of life.” They were the watering holds of Pluto’s kingdom.

Although it was almost as well known amongst the regulars for having a pub cat, which makes Sloane Square doubly unique for having both a pub and a cat in the tube station. 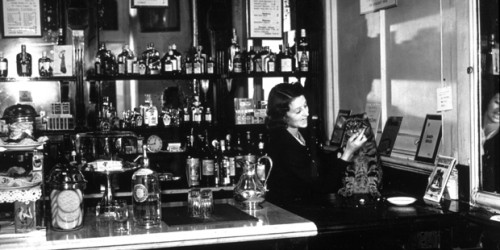 The site of the small pub is now the convenience store on the westbound platform.

At Liverpool Street station could be found Pat-Mac’s Drinking Den, which was on the eastbound platform of the Metropolitan Line. It was converted into a cafe in 1977. That small pub also had the novelty of having a serving hatch leading directly onto the platform, letting passengers drink while waiting for a train.

At Mansion House, a buffet bar was run by Spiers and Pond, which was tantalizingly close to the platforms, but not quite on them.

Spiers and Pond also operated a venue at Moorgate station, and while on the station proper, it appears to have been accessed from outside the main building.

In fact, Spiers and Pond were the WH Smiths of refreshment rooms on the London Underground, having been there from the very start, and ending in 1932 with venues at:

They were in place after signing a deal with the Metropolitan Railway while it was still being built, and the British Periodicals of Sept 1866 noted that the new Moorgate-street station building, while only temporary, was much improved by the presence of Spiers and Pond’s refreshment rooms.

The partnership of Spiers and Pond undeniably revolutionised catering on the transport network, and ended up with some 200 venues across England and some 60 dining cars.

A writer in All The Year Round of December 1867 praised the “modern magicians”, who had ended an abuse “under which the British railway traveller had groaned ever since railways were”.

In a description that apes later British Railway’s catering, railway food before Spiers and Pond were described as “the scalding infusion, satirically called tea, the stale bad buns, with their veneering of furniture polish, the sawdusty sandwiches, so frequently and so energetically condemned, and, more so than all, the icy stare from the counter, the insolent ignoring of every customer’s existence, which drives the hungry frantic,”

Some of their branches acquired a less savoury reputation though, with Edgware Road closing in 1968 thanks to being a popular location for commuters seeking succour in the arms of a lady of the night.

By the 1960s, Spiers and Pond was owned by Grand Metropolitan Hotels, who in 1971 bought Truman Breweries. This lead to a mini-revolt as the bars on the Underground switched from Bass and Worthington to Truman’s beers the following year.

Some of their other outlets on the London Underground that were of note included a bar at South Kensington station which acquired the nickname of The Snakepit for reasons which no one has ever quite worked out.

Paddington Station had a “blue room”, which was more due to the habit of calling the best room in the house a blue room, and by railway standards, this was said to have been quite a posh establishment.

Baker Street’s ticket hall bar was known, not unsurprisingly as, Moriarties. Rather grander is the pub to be found above the station in the old Chiltern Court block of flats, which is still there, and now a branch of Wetherspoons.

A Broom Cupboard is the average size of a flat today but was once the nickname of the pub to be found at Kings Cross underground station, due to its compact size.

Incidentally, the toilets of the modern Betjeman Arms pub in St Pancras station are apparently, a converted broom cupboard.

Quite why the pubs died out is a bit of a mystery. Certainly, the fading fortunes of the Truman Brewery who owned most of the venues can be considered to be a factor, but more likely it was simply that people were less inclined to grab a quick pint on the way home.

In the early days, trains were slow and journeys were long, so a pint to fortify the body while waiting 10 minutes wasn’t an unreasonable idea. Today with trains every couple of minutes and delivering commuters to their destinations at speeds that would have amazed our Victorian ancestors, a pint on the Underground seems less necessary.

…although a pint at the destination after 40 minutes of another person’s headphones and smelly armpits is more likely to be necessary.

As such, there is still one pub left, which can be reasonably considered to be “on the London Underground”, and that is at Kew Gardens, although you have to go outside the station to get into the pub, which has windows right next to the platform.

It’s a suitable point to stop on the way home.