A hidden oasis of calm next to Marble Arch

A quiet haven of peace sits on blood-stained land opposite Hyde Park. A living memorial to those who died for their beliefs in more troubled times.

The Tyburn Nuns have maintained a quiet vigil on this site of slaughter for over a hundred years as they commemorate over 100 Catholics who were put to death in the cruellest of fashions for believing that the Pope was the head of the Church. 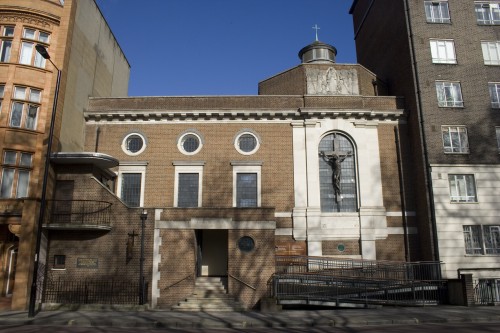 Going into the building through the obvious door, took us into a quiet church with a scene out of medieval England as a nun knelt in silent prayer behind an ironwork barrier. Obviously this silent room is not the place to ask for a tour of the building, so outside and next door is the correct place to be.

A ring on the doorbell, and hatch opens behind a metal grill, and another nun asks us to wait by the staircase.

For deep underneath the church is a Shrine, and it is this which marks a place of pilgrimage for the faithful, and a worthy place to visit for the curious.

A ratting of keys and a young sister unlocks the doors to let us pass within. For the defining image of a convent is the locked doors and barred windows. Nuns don’t feel trapped, but is a reminder of their service within closed walls.

The location for this particular convent was — it is claimed — to have been predicted by Gregory Gunne who said a Catholic building would be erected to remember those who died for their faith. 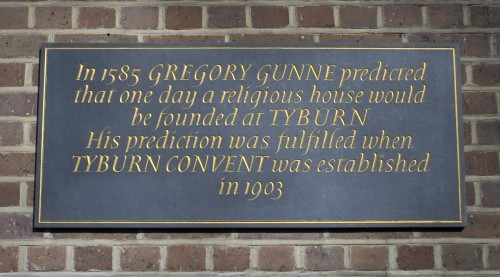 By coincidence, when a French religious order fled France in 1901 due to a religious clamp-down, a building next to the site of the Tyburn Gallows was available, and funds raised to build a modest little convent.

Over 300 years later, and the prophesy was finally fulfilled in 1903.

In fact, they nearly had to move out again a few years later due to financial worries, but seem to overcome that, and are still there today. While the main act is devotional prayer, they also train nuns to work overseas, and take curious visitors down into their Shrine for a look around.

Down the locked and very municipal stairs that feel more like an old office building than a religious decent, and into an equally plain chapel room. 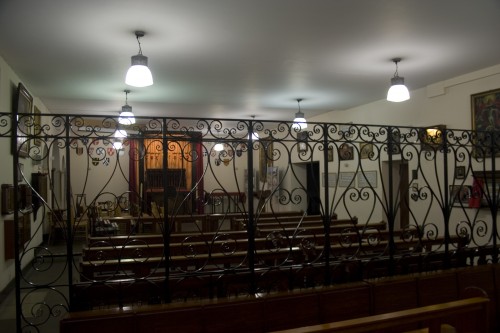 It is not the room that matters here, but the small ornaments that line the walls that call visitors to the site, for here are the relics of the Catholic martyrs. A blood stained fragment of cloth, a bone, a hand written note. All were perilously snatched from the dying person in defiance of the authorities who would probably have imprisoned the collector.

The punishment for the Catholic martyr was a traitors death of the being hung, drawn and quartered, and not much less could have happened to the collector of relics.

All the martyrs were slain upon the Tyburn Tree, that notorious place of execution, having often been dragged head down on a hurdle from Newgate Prison.

Fans of a certain Pet Shop Boys song might be discomforted to learn that the then popular saying “Go West” was slang for those who were taken from the prison to be hung at Tyburn. To go west, was to die.

In the chapel, two tiny fragments of wood are thought to be the only known relics of the Tyburn Tree itself, which was taken down in November 1783. 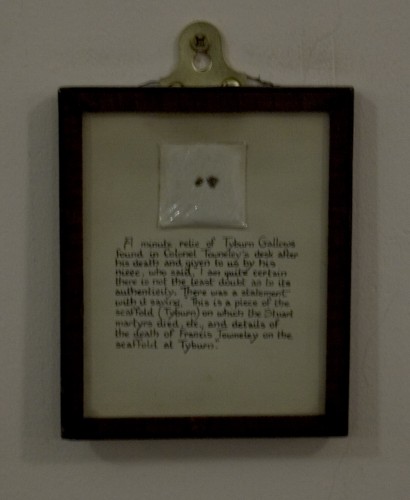 As with most religious buildings, its a very calm and peaceful room, even though the walls are lined with the mementos of murder and suffering. A small courtyard next door where the murmur of road traffic is again only barely noticeable is also home to the grave of Mother Marie-Adele Garnier who established the convent.

Today’s nuns campaign for her canonization, and prayers for her intercession are placed next to her grave.

The nuns pray continuously in shifts, and sing Mass seven times daily. Apart from that, their day is spent in silence, except for one hour of recreation, or talking to visitors. Playing scrabble is still a favourite, although it seems a brief flirtation with Snooker has died out.

In the 1980s, the convent hosted the Nuns World Snooker championships.

Something else that has died out, and more recently, is an annual silent procession from Newgate to the Tyburn Convent, where a Cardinal would traditionally address the crowd from the balcony that can still be seen on the front of the building.

Sadly, it seems it was curtailed around the turn of the century, partly due to the cost, but also because, according The Telegraph, the route passed down Oxford Street, and that disturbed the shoppers out on a Sunday pilgrimage of their own to Mammon.

If so, even this heathen minded sort would gladly campaign for its restoration. If the Salvation Army can march along Oxford Street each weekend, then why not some Nuns once a year?

It would be a charming thing to see. You don’t need to share the faith to appreciate an effort to remember those who were willing to die for a belief, regardless of what that belief was.

In a modern world of fuss and bother, it is nice to have these pockets of silence in our busy city. They may be hidden behind closed walls, but just knowing they exist is a pleasing thing.

You can however freely pass through locked doors yourself, as a sister will offer a tour of the Shrine to the Martyrs at 10:30am, 3:30pm or 5:30pm. Just turn up and ask. Tours are free, although a donation box is in the chapel.

If making a special visit, best to contact them, as sometimes the Shrine is in use for its more official purpose, but no harm popping in if you are in the area.

Thanks to Laura for organising our little look around. 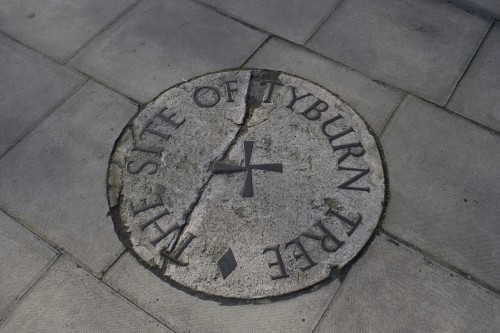