A glass case, a dead dog, and Slough train station

On a London bound platform at Slough station can be found a rather old glass case, and inside, a very dead dog. Stuffed.

This is Station Jim, or Dog Jim sometimes, who was a charity collection dog who would walk around the station with a small wooden box for people to put money in.

The money he raised was given to the Great Western Railway Widows’ and Orphans’ Fund, and although he only worked for two years, he managed to collect the astonishing amount of £40 – that’s about £5,000 in today’s money.

He was taught to bark whenever he received a coin, and on one Sunday during the summer of 1896, a hospital parade was organised at Southall, and his trainer was asked to take him up there to collect. The result was that when his boxes were opened by the Treasurer 265 coins were in them. There were only about five pieces of silver, but when it is remembered that he barked for each coin given him, this must be regarded as a good afternoon’s work.

He knew a great many tricks. He would sit up and beg, or lie down and “die”; he could make a bow when asked, or stand up on his hind legs. He would get up and sit in a chair and look quite at home with a pipe in his mouth and cap on his head. He would express his feelings in a very noisy manner when he heard any music. If anyone threw a lighted match or a piece of lighted paper on the ground he would extinguish it with a growl.

He died suddenly, still wearing his coin collecting harness on the platform on the evening of November 19th 1896. Being much loved by passengers, a collection was made and he was stuffed and put on display on Platform 5.

Although the Great Western Railway Widows’ and Orphans’ Fund no longer exists (it’s now a staff pension scheme), there is still a collection box underneath Station Jim.

He doesn’t bark anymore, but he’s still collecting for charity. 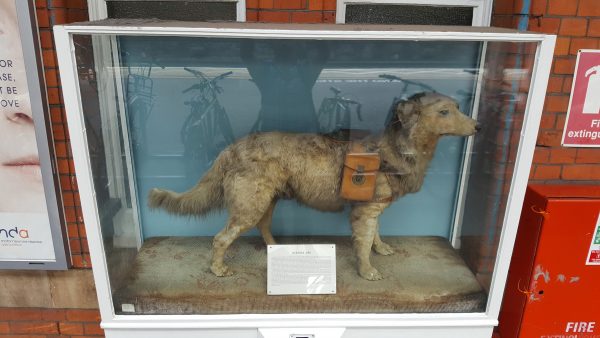