The upper end of London’s Cheapside used to contain a rather generic looking 1960s office block of no outstanding architectural detail, but equally not excessively offensive to the eye. This was slowly demolished a few years ago, leaving open a temporary and quite impressive view of St Paul’s Cathedral. Sadly, such open spaces are not meant to last, and it has slowly been replaced with a squat monster of a building that imposes itself on the area in a quite unforgiving manner.

Unlike, for example, the Gherkin, which for all its massive bulk manages to perch daintily on the ground, One New Change is a more like a tall glass skyscraper that has given up hope and flopped flaccidly over the pavement like a collapsing blancmange.

Half way along the wall, punched violently into its grey mass is a gaping red wound, not so much welcoming shoppers as swallowing them up without a care.

For all the media and publicity that focused on the so-called main entrance that faces St Paul’s Cathedral, it is actually the side entrances and the rear hole of the building that are likely to see the most traffic from the office workers during the week.

It is also a building of strange and unpleasant contradictions, as if faced with an exterior that desired to be as inoffensive to the neighbouring Cathedral as possible, it has over engineered what was left to play with. From the bland facia along Cheapside, to the utililitarian backside, you come to the south side which looks for all the world more like a glassy stealth battleship. Solid walls of grey with strange seemingly pointless angles all over the place to deflect radar signals.

Sadly, it cannot quite deflect the optical reception and sits uncomfortably next to more traditional offices that surround the southern aspect.

The interior of the building is is filled with sharp angles, glass and mirrors. It’s a magicians toolbox that seeks to deflect the eye away from the reality of an empty wallet and into the illusion of aspiration and desire as the walls are lined with generic high-street brands and the latest in fashionable fast food eateries.

Here in the centre of the Crytal Dome though, you can appreciate the building’s main attraction – the huge vista of St Paul’s Cathedral – but only if you stand in the right place. The best views are in fact from the now-mandatory glass elevators which will eventually carry people up to a six floor roof terrace. 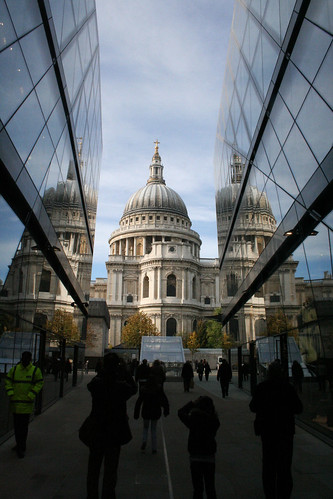 Rising up physically as the church opposite seeks to lift you spiritually, sadly, what could have been the best open-air view of the cathedral is blocked by the lifts themselves. A chance to view the soaring heights of a Cathedral is obscured by the sign explaining the delights of Mammon instead.

A basement which would probably be a death zone for retailers down there has been rescued not by desirable architecture, but by the imposition of a “key tenant” in the form of Marks and Spencer.  On the far wall under the escalators is a grey wall with some mosaics and which looks unfinished. Is there a missing shop to go here, or is it a future extension that will run under the street and take shoppers directly into the Cathedral?

Of the whole building, it is an unexpected delight down here in this unloved corner that thrilled me. The entrance floor above is in fact an opaque glass, and down here you can see the shadows of feet and prams as people scurry above. The level of opacity is just enough that you can only just make out the disembodied feet and wheels, which adds delightfully to the effect as they are reflected on the steel supports for the glassy floor. 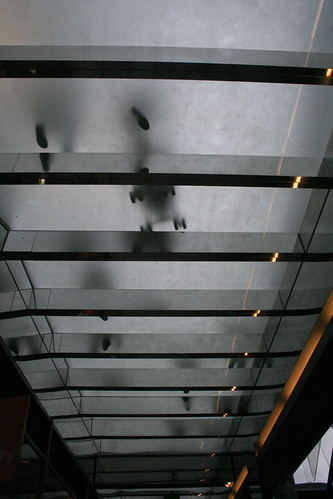 I am not a pure traditionalist and often love the juxtaposition of old and modern – but for it to work, the modern has to be of outstanding quality and not try to apologise for its existence.

This shopping centre is offensive to the eyes.