It’s not often that you see a bit of a tube train inside an art gallery, but that is what you can see for the next couple of weeks in a small gallery next to the vastly larger Tate Modern.

In fact, the three-seat section of a Jubilee line train was part of an artist’s studio and used for a series of paintings that started just over four years ago in June 2009.

The artist in question, Ewing Paddock wanted to paint people he saw on the tube, but asking people on their trip if they would sit for a portrait on a moving shuddering train was not viable. So, why not invite them to sit in a studio, where a mock up train has been built?

And that’s what he has been doing, and the result of that effort — 25 paintings — is now on display at the Bankside Gallery, along with the tube train interior. 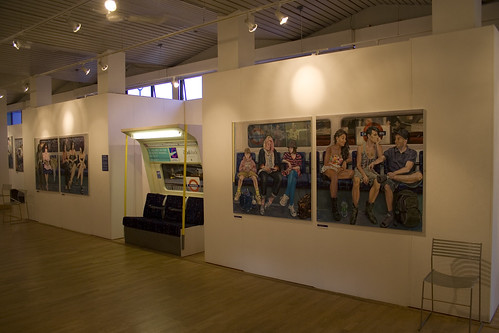 The paintings themselves are large — too large I think for the average home — and done in a certain style that probably has some sort of arty definition that I am not going to try and look up, but not unappealing.

In a way, the slightly rough style to the finish fits well with the topic as the tube is a bit rough around the edges, and the people who use it are as casual as the painting style. So it works for me as an aesthetic. 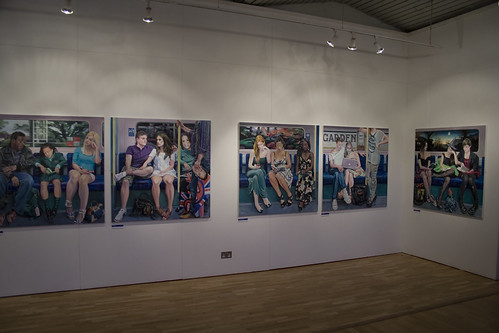 One of the aspects of the London transport network that has always fascinated me at least, is that everyone uses it. Unlike some cities around the world where the rich use cars and the poor use buses, in London, everyone from a Managing Director to a street sweeper uses the tube.

It’s a remarkably democratic travel system, largely enforced upon the rich by the lack of a viable alternative. So, the paintings reflect that diversity, sometimes subtly with suits next to casual, and sometimes more dramatically with the ballgown next to a t-shirt. 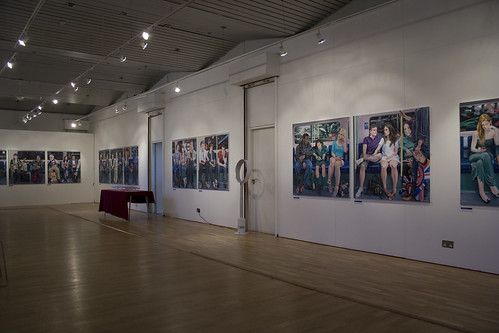 Do also look for a small joke in one of the priority seat signs that has been painted in.

As mentioned earlier, the tube seat is there, with its own personal line map denoting a fictitious tube line running from Brent Cross (Hell), through Slough, Mornington Crescent and on to  Cockfosters and Beyond (Heaven).

If you’re so inclined, take a trip in the tube train and upload a photo to the artists facebook page.

The exhibition is open every day until the 28th July, 11am-6pm and entry is free. (map link) 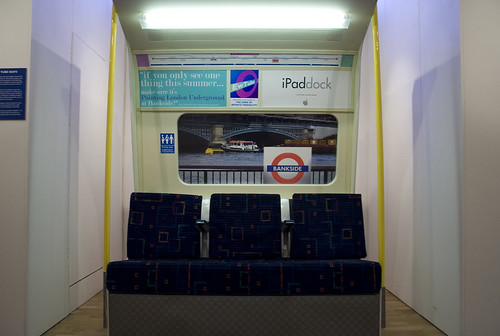